There are several theories regarding Dark Matter. It is completely invisible to light and other forms of electromagnetic radiation and impossible to detect. Let us study through this article about dark energy and dark matter. Is it really exist?

We know our Universe include Earth, the Sun, Stars, Planets, Comets, Asteroids, Black Holes and Galaxies, etc. which is made up of protons, neutrons and electrons bundled together into atoms. When scientists study our Universe, they see that it is expanding. But the question arises that if the Universe is made up of galaxies, stars, planets etc. then it should not expand. That is something else is there which make it expand. Isn't! The most surprising discovery of the 20th century was baryonic matter which makes up less than 5 percent of the mass of the Universe.
Even in 1950s the studies of other galaxies first indicated that the Universe contained more matter than seen by the naked eye. Through this article, let us study about dark matter and dark energy.
First we will study about Dark Energy?
As, discussed above that according to scientists our Universe is expanding. Which means that something else is there instead of galaxies, planets, stars etc? That is some energy should be there which is making the Universe to expand. Scientists have termed it as Dark Energy. Roughly, it makes up 68%, about two-thirds, of the Universe. Scientist knows about it because it affects the expansion of the Universe.
Do you know that the discovery of dark energy in 1990s was a complete shock to scientists? Earlier, scientists assumed that the attractive force of gravity would slow down the expansion of the Universe over time. But after measuring the rate of deceleration, they found that the expansion was actually speeding up. Then they think that the accelerated expansion of the universe is driven by a kind of repulsive force generated by the quantum fluctuations in otherwise empty space and called this mysterious force as Dark Energy.

How ISRO will make Indian Railways safe?
Now, we will understand about Dark Matter 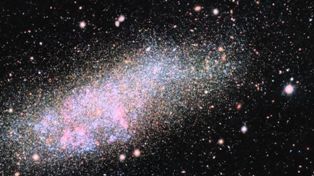 Source: www.phys.org.com
We have studied that in space there is a stuff which has gravity. It pulls matter like stars, galaxies etc. But this is not regular matter and is not a black hole. Scientists called it as Dark Matter. It seems to be 27% of the Universe. Normal matter interacts with the electromagnetic force but dark matter does not. This means that it does not absorb, reflect or emit light, making it extremely hard to spot. In fact, scientists come to know about its existence from the gravitational effect which seems to have on visible matter.
This observation of scientists shows that the matter we know  and that makes up all stars and galaxies only accounts 5% of the content of the Universe.
According to some researchers dark matter could contain "supersymmetric particles" that is hypothesized particles that are partners to those already known in the Standard Model.
Further, experiments at the Large Hadron Collider (LHC) may provide more direct clues about dark matter. Some theories say that dark matter particles would be light enough to be produced at the LHC. If they were created at the LHC then they would escape through the detectors unnoticed. However, they would carry away some energy and momentum, so they could infer their existence from the amount of energy and momentum “missing” after a collision.
Therefore, we can say that together dark energy and dark matter make up 95% of the Universe. This means that only 5% matter we know and understand. Energy like heat, light and X-rays together with matter like people, planets, Sun, galaxies etc only makes 5% of the Universe.