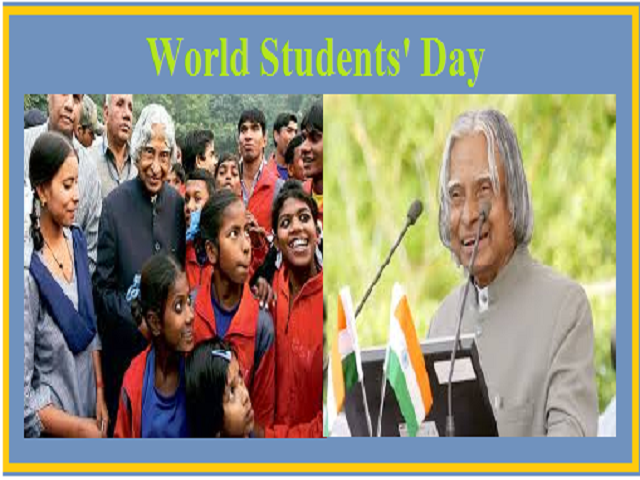 World Students’ Day 2020: It is celebrated on 15 October to commemorate the birth anniversary of Dr. A.P.J. Abdul Kalam.

As we all know that Dr. A.P.J. Abdul Kalam was the 11th President of India (2002-2007). Being a politician, he was a scientist and a teacher. He played a crucial role in the Pokhran-II nuclear tests in 1998 and so, he earned the title 'Missile Man of India'. On 27 July 2015, he suffered a cardiac arrest while delivering a lecture to the students of IIM Shillong.

“If people remember me as a good teacher, that will be the biggest honor for me.” – Dr. A.P.J Kalam

Dr. A.P.J. Abdul Kalam's role in teaching and his dedication can't be explained in words. He always identified himself as a teacher. While teaching only in Shillong IIM College, he had a cardiac arrest. This showed his dedication towards teaching. In 2006, in the President's address at the presentation of the National Award to Teachers, he said that" Teachers have to realise that they are the builders of the society. A good society can be built when students have the knowledge and are proficient in their subjects. They have also to provide a vision for life to the students and to inculcate the fundamentals of values which should be practice in the years to come".

He was born on 15 October, 1931 at Dhanushkodi, Rameswaram, Tamil Nadu, India. His full name was Avul Pakir Jainulabdeen Abdul Kalam. In 2002, he was elected as the President of India, and before becoming president he was working with the Indian Space Research Organisation (ISRO) and Defence Research and Development Organisation (DRDO) as an aerospace engineer.

As a scientist, he began his career at the Aeronautical Development Establishment of the Defence Research and Development Organisation (DRDO). Also, he had served as the project director of India's first Satellite Launch Vehicle (SLV-III) at ISRO.

Do you know that after his important role in the Pokhran test? Dr. A.P.J. Abdul Kalam visited Switzerland in 2005 after which the country declared 26 May as 'Science Day' to pay respect and honour to his visit.

So, now we have come to know that World Students’ Day is celebrated annually on 15 October on the birth anniversary of Dr. A.P.J. Abdul Kalam. No doubt, he had inspired millions of youth through his works, achievements, books, lectures, etc and today also he inspires. He was a simple personality that always be remembered.