IIT Mandi is conducting its placement drive for the batch 2021, till now 137 students have been selected. This time, the median salary has risen by 16%, and maximum salary by 9%, as compared to the previous year. Check details here 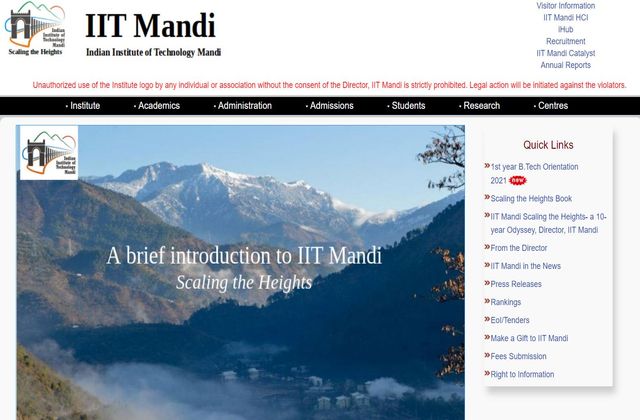 IIT Mandi Placements 2021: As per the updates, the Indian Institute of Technology (IIT) Mandi has started phase 1 of placement. IIT Mandi’s placement process observed participation from 102 companies. A total of 166 offers from various recruiters were made and 137 students were placed till today 1st December 2021. Phase 1 of IIT Mandi placements started from mid-October till mid-December 2021 in which 102 companies have participated so far. As many as 51 students from IIT Mandi have already got Pre-Placement Offers (PPOs) before the start of the actual placement drive. IIT Mandi has also received seven international offers this year from companies.

IIT Mandi has seen a rise in the average salary by 13%, median salary by 16%, and maximum salary by 9%, as compared to the previous year. 51 students from IIT Mandi had received pre-placement offers even before the actual placement drive took place.

Students were aware of virtual hiring scenarios from last year’s experience. The Career and Placement (CnP) Cell announced the layout of the drives beforehand which helped the students in preparing for the virtual mock interviews, the official statement said. As part of IIT Mandi placement drive preparation, career guidance sessions were also organised by the CnP Cell.

Dr Tushar Jain, Advisor, Career and Placement Cell, IIT Mandi, stated ”The current placement drive at IIT Mandi can be seen as the benchmark drive with respect to the previous years. In this drive, the institute has noticed a significant growth in terms of the number of offers and an increase in participation from the diversified companies, which has become possible due to practicum-based and industry-oriented curriculum.”