An analysis of IIT JEE Advanced 2017: Paper was easier than last year

Over 2, 20,000 students appeared for JEE Advanced 2017 at different centres across the country on Sunday, May 21.These exams were conducted in the seven zonal IITs under the guidance of the Joint Admission Board (JAB) 2017.

These exams were conducted in the seven zonal IITs under the guidance of the Joint Admission Board (JAB) 2017. 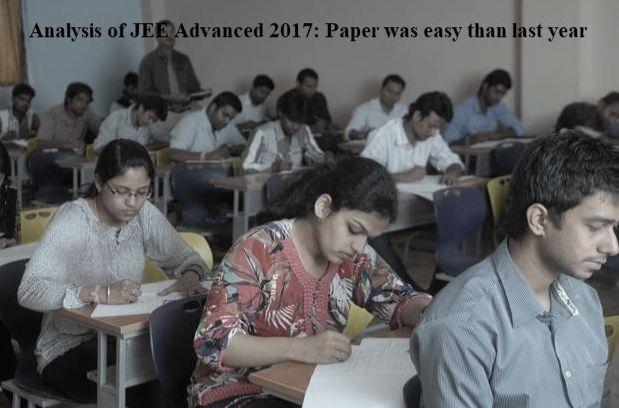 According to JAB, the performance of a candidate in this examination will form the basis for admission to the bachelor’s, integrated master’s and dual degree programs (entry at the 10+2 level) in Indian School of Mines (ISM), Dhanbad and in all the Indian Institutes of Technology (IITs) across the country.

“The decisions of the JAB 2017 will be final in all matters related to JEE (Advanced) 2017 and admission to IITs,” said JAB.

According to sources, over 15,000 students took the joint entrance examination (Advanced) across four regional centres in Telangana to seek admission to any one of the 23 Indian Institutes of Technology (IIT). The number of students who appeared for the exam last year was 18,000, marking a fall by 3,000 this year. According to the experts, many students skipped the advanced examination even though they qualified for it.

According to reports, the overall level of paper was moderate, though some experts and students said that physics and chemistry were tougher than mathematics section.

The Joint Seat Allocation Authority (JoSAA) has been set up by the Ministry of Human Resources Development (MHRD) to manage and regulate the joint seat allocation for admissions to IITs, ISM, 31 NITs, 20 IIITs and 18 other government funded technical institutes.

After completion of entrance examination, IIT will release JEE Advanced answer keys 2017 for the students so that they can tally with their answers and find out their score. Board is likely to release the key on June 4, 2017.

After the release of JEE Advance answer keys candidates are likely to be given 2-3 days to send their feedback. Some of the private coaching institutes have started releasing the answer keys today itself.