BPSC Main exam questions 'Is Governor a mere puppet?'. The BPSC Mains 2019 question paper created an uproar in the state and forced BPSC to blacklist the teacher who had set the question paper. Check BPSC Press Release here and also know the role of State Governor. 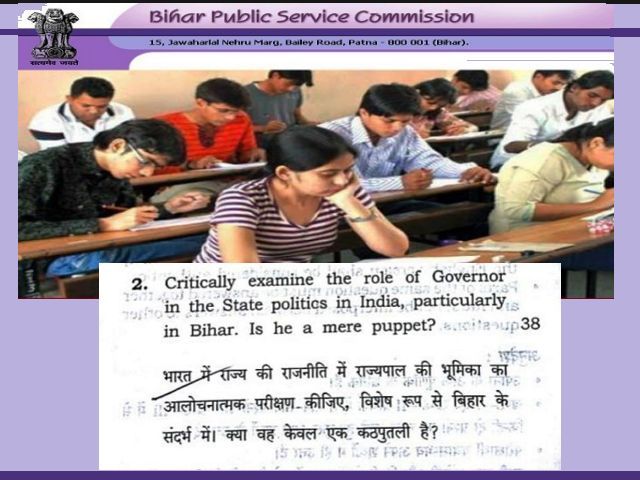 BPSC Main 2019 Exam has left the candidates in a perplexed state when it questioned on the role of Bihar Governor as a mere “Puppet” or “Kathputli” in the state politics. The BPSC Main (64th) question paper asked: “Critically examine the role of Governor in the state politics in India, particularly in Bihar. Is he a mere puppet?" The question was asked in the General Knowledge Paper II examination of BPSC Mains that was held on 14 July 2019. The question was asked in English and Hindi language both and carried 38 marks.

The question also saw reactions from the States Ministers. Sanjay Jha, the Bihar Water Resources Minister, said that it is very unfortunate that such question was asked and also denied the role of government in setting the paper.

As per Article 153 of Indian Constitution, every state shall have a Governor who will exercise the executive powers of the state directly or through officers subordinate to him. The State Governor possesses the executive, legislative, financial and judicial powers. However, the Governor do not exercise diplomatic, military or emergency powers exercised by the President of India. Here are the powers enjoyed by a State Governor:

Executive: Powers exercised by the Council of State Ministers in the name of Governor.

Legislative: Power to give assent to State Bill or return the Bill for reconsideration, except the Money Bill

Judicial: Governors are consulted by the President prior making the appointment of Judges in High Court.