This article talks about the detailed analysis of CBSE Class 12th Board Exam 2016 English Paper. At the end of the paper, students seem to be relieved with the English Paper, which was dubbed as a balanced one.

The CBSE Board Class 12 Exams began yesterday with the English Paper (English Elective/English Elective-C/ English Core). Nearly 10.67 lakh students from across the country appeared for the three - hour examination, amid a general sense of nervousness and excitement. The CBSE English Exam began at 10:30 AM and ended at 1:30 PM.

At the end of the paper, students seem to be relieved with the English Paper, which was dubbed as a balanced one. Many academicians also pitched in with a similar view, terming the English core as well as elective paper as a test with a reason nable balance between different topics.

The English (Elective) – C, which drew a total of 100 marks, was divided in to three sub-sections. 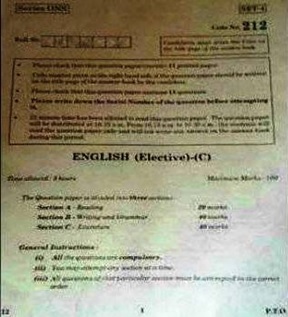 The general sense at the end of the CBSE English Paper was that of satisfaction among the students. Many termed the paper as the easiest compared to the previous years, which were extensively used by students as reference point during the exam preparation.

Some student did complaint about the paper being relatively lengthy, but that is an accepted fact for language papers in CBSE exams, over the years. The majority of students faced difficulty in managing their time for the writing section that comprised of notice writing, advertisement writing, error correction and letter writing sections. The test in the writing section was relatively easy, but it consumed a lot of time and required good time-management skills.

Students and teachers reiterated that the CBSE English paper covered almost the entire syllabus and was not biased towards any one topic or section. Students, who were able to manage their time well for all the three sections were confident of scoring close to 90% marks in English Paper.