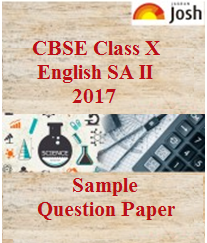 CBSE Class 10 English paper is scheduled to take place on 30th March 2017. Though students would have already prepared for the exam, still they need to revise everything they know. Solving sample papers, model papers or practice papers can be a good idea to track your preparedness for the coming exam.

Some key features of CBSE Class 10 Science Sample Paper SA2/ Board 2017, are:

The question paper is divided into three sections :

The paper is to be attempted within 3 hours and carries 70 marks. To these marks extra 20 marks will be added for Assessment of Speaking and Listening skills making the paper 90 of marks.

Some sample questions from the paper are given below:

Q. 1. Walter Elias “ Walt” Disney was born on December 5, 1901, in Hermosa, Illinois. He lived most of his childhood in Marceline, Missouri, where he began drawing, painting and selling pictures to neighbours and family friends. Disney attended McKinley High School in Chicago, where he took drawing and photography classes and was a contributing cartoonist for the school paper. At night, he took courses at the Chicago Art Institute.

2. When Disney was 16, he dropped out of school to join the army but was rejected to being underage. Instead, he joined the Red Cross and was sent to France for a year to drive an ambulance. When Disney returned from France in 1919, he moved back to Kansas City to pursue a career as a newspaper artist. His brother Roy got him a job at the Pesmen-Rubin Art Studio, where he met cartoonist Ubbe Eert Iwwerks, betters known as Ub Iwerks. From there he made commercial based on cutout animation. Around this time, Disney began experimenting with a camera, doing hand-drawn cel animation, and decided to open his own animation business. From the ad company, he recruited Fred Harman as his first employee.

3. Walt and Harman made a deal with a local Kansas City theatre to screen their cartoons, which they called Laugh-O-Grams. The cartoons were hugely popular, and Disney was able to acquire his own studio, upon which he bestowed the same name. Laugh-O-Grams hired a number of employees, including Harman’s brother Hugh and Iwerks. They did a series of seven-minute fairy tales that combined both live action and animation, which they called Alice in Cartoonland. By 1923, however the studio had become burdened with debt, and Disney was forced to declare bankcruptcy.

4. Disney and his brother Roy. Soon pooled their money and moved to Hollywood. Iwerk also relocated to California, and there the three began the Disney Brothers’ Studio. Their first deal was with New York distributors Margaret Winkler, to distribute their Alice Cartoons. They also invented a character called Oswald the Lucky Rabbit, and contracted the shorts of $1,500 each.

(a) What did Walt Disney learn in childhood?

(b) Why was Walt not selected in the army?

(c) How did Walt’s brother help him in Kansas?

(f) What deal was made with the Kansas City theatre?

(g) Write briefly about Alice in the Cartoonland.

(h) What was the deal made with Margaret Winkler?

Q. Answer any four of the following questions in about 30-40 words:

(a) Who was Gogon Pakrashi? What did he preach Patol Babu?

(b) What prophecy does Antony make by the side of Caesar’s body?

(c) What did Jenkins want Hallock to do?

(d) Why do you think Patol Babu went away without taking any payment for his role?

(e) What message is conveyed through the poem Ozymandias?