Important Biology diagrams for CBSE Class 10 Board Exam 2022 are given below:

Neurons or the nerve cells form the basic components of the nervous system. A typical neuron possesses a cell body called as soma, hair like structures called as dendrites and an axon. Dendrites are thin structures that arise from the cell body. These dendrites acquire information from synapses via neurotransmitters and convert them into electrical impulses. These impulses are further carried over to the cell body. 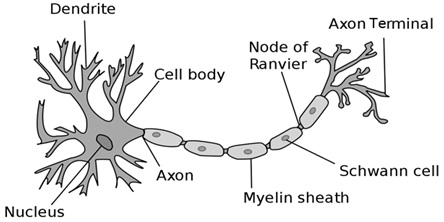 A human brain is composed of three main parts- the forebrain, the midbrain and the hindbrain. These three parts have specific functions.

• Forebrain: This consists of the cerebrum, hypothalamus, and thalamus.

• Midbrain: Consists of the tectum and tegmentum.

• Hindbrain: Is made of the cerebellum, medulla, and pons. 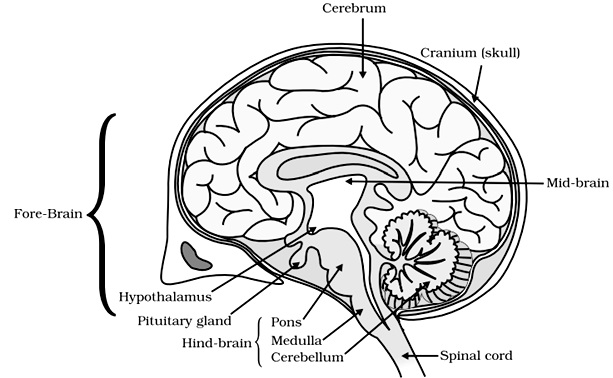 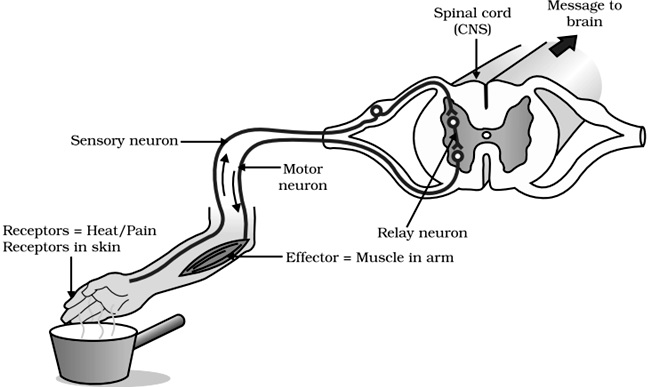 A simple pathway can be represented as follows:

The human excretory system mainly comprises of the following parts:

• A pair of kidneys

• A pair of ureters

Kidneys have a structural filtration unit called nephron where the blood is filtered. Each kidney contains a million of nephrons. Capillaries of kidneys filter the blood and the essential substances like glucose, amino acids, salts, and required amount of water are reabsorbed. Meanwhile, the pure blood circulates back to other parts. Excess water and nitrogenous waste in humans are converted to urine. Urine thus formed will be passed to urinary bladder via ureter. Through the urinary opening at urethra, we excrete urine. 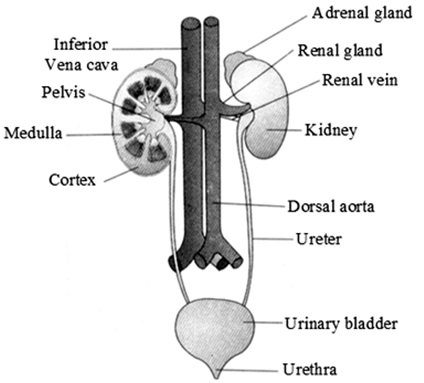 The primary function of the digestive system is to break down food both mechanically and by the use of enzymes so as to release energy that can be used by the body to perform various functions and proper growth/repair of body cells.

• Food is taken inside mouths where saliva that secreted by salivary glands and contains digestive enzymes like salivary amylase, breaks down starch (contained in food) into sugar.

• Then tongue helps in chewing, moistening, rolling and swallowing it.

• Food moves into the stomach, through the movement of walls of oesophagus.

• Stomach mixes the food hence received with various digestive juices to cause its partial digestion.

• The food from stomach moves into the small intestine. It is the site where complete digestion of carbohydrates, proteins, and fats takes place. It gets intestinal juices from two different glands – liver and pancreas that help in the further digestion of food.

• Liver is the largest gland of the body and secretes bile juice. Bile juice is stored in the gall bladder and helps in digestion of fats.

• Pancreas has enzymes that help in total digestion of all food components.

• A part of the food which we eat cannot be digested by our body passes from small intestine to large intestine. The walls of large intestine absorb most of the water from this food and become solid. Last part of the large intestine called ‘rectum’ stores this undigested food for some time and finally, egested from our body through anus as faeces or ‘stool’. 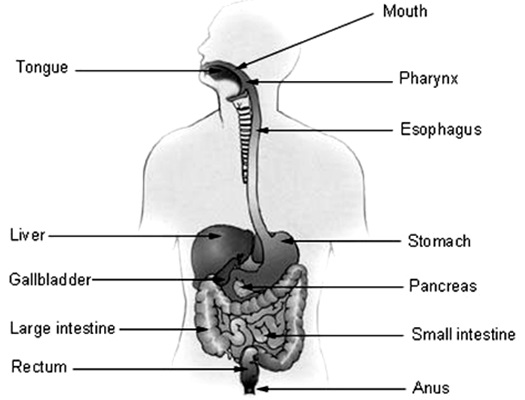 The human heart is mainly divided into four parts: two upper parts are called atria, and the lower ones are called ventricles. The ventricles are the chambers that pump blood and atrium are the chambers that receive blood. Among which both right atrium and ventricle make up the right heart, and the left atrium and ventricle make up the left heart. The right and the left regions of the heart are separated by the wall of muscle called septum. The de-oxygenated blood from various parts of the body is poured into right atrium through large veins called vena cava. As the right atrium contracts, the corresponding right ventricle expands and blood through tricuspid valve gets collected. It then pumps it to the lungs for oxygenation by pulmonary arteries which arise from the right ventricle. The right semilunar valves close and prevent the blood from the pulmonary veins after blood passes through the pulmonary arteries. Then the oxygenated blood is received by the left atrium from the lungs via pulmonary veins. From left atrium the blood is transferred to left ventricle through bicuspid valve. From the left ventricle the blood is pumped to various parts of body through aorta. 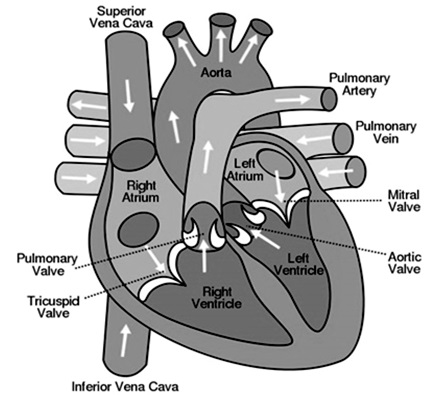 • Nasal cavity: It facilitates the intake of air. It is lined with hair and mucus to filter the air and remove dust and dirt.

• Pharynx: It is a passage behind the nasal chamber and serves as the common passageway for both air and food.

• Larynx: Also known as the sound box as it helps in the generation of sound and thus helps us in communicating.

• Epiglottis: It is a flap-like structure that covers the glottis and prevents the entry of food into the windpipe.

• Trachea: It is a long tube passing through the mid-thoracic cavity.

• Bronchi: The trachea divides into left and right bronchi.

• Bronchioles: Each bronchus is further divided into finer channels known as bronchioles

• Alveoli: The bronchioles end up into the balloon-like structures known as the alveoli

• Lungs: We have a pair of lungs, which are sac-like structures and covered by a double-layered membrane known as pleura. 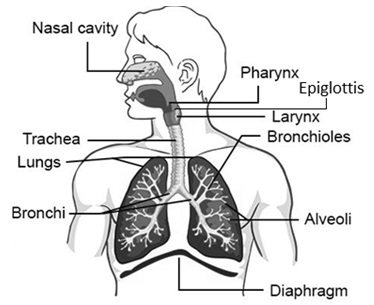 Amoeba is a unicellular animal. It takes in food by forming finger like projections called pseudopodia and forms a food vacuole. Inside the food vacuole the food is digested and absorbed. The undigested food is then sent out through the surface of the cell.

• Testicles (testes): A pair of oval-shaped organ masked in a pouch called scrotum. Testes are responsible for the production of the sperms and male hormone, testosterone.

• Epididymis: The sperms formed in testes come out and go into a coiled tube called epididymis. Here the sperms get matured.

• Vas deferens:  From epididymis, sperms are passed to urethra through the muscular tube called vas deferens.

• Penis: Penis is a cylindrical tube which serves as both reproductive organ as well as excretory organ. It delivers sperms into the vagina during sexual intercourse. 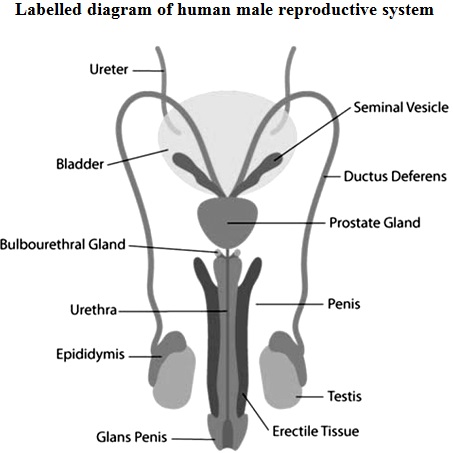 • A pair of ovaries: Ovaries produce and store ovum in them. They also produce a female hormone called estrogen.

• Fallopian tubes (Oviducts): They are the site of fertilization. They connect ovaries with the uterus.

• Uterus: Uterus is the site of development for the embryo.

• Vagina: It is the part which connects cervix to the external female body parts. It is the route for penis during coitus as well as a foetus during delivery. 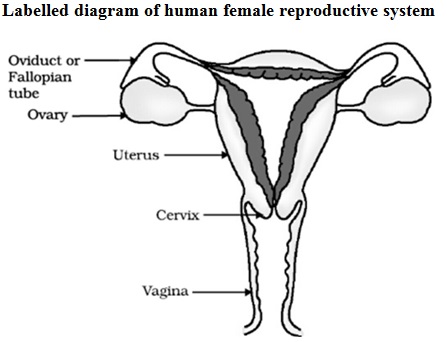 11. Budding in Yeast and Hydra

Budding is a method of reproduction in unicellular organisms like yeast and hydra. In this method a bud like projection is formed on the body of the organism. The bud then develops into a new individual. It then separates from the parent and forms an independent individual. 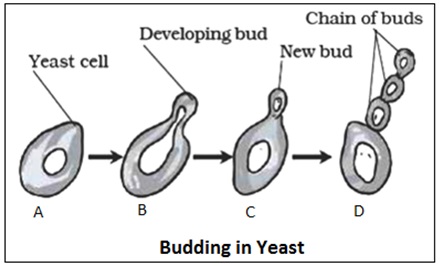 12. Regeneration in Planaria and Hydra

Regeneration is a method of reproduction in which a part of the body of an organism if cut or broken, can develop into a new individual. 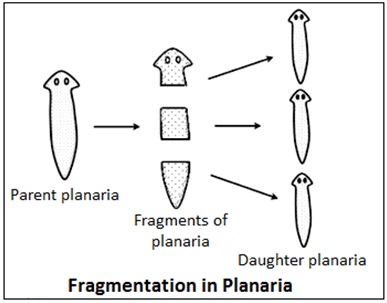 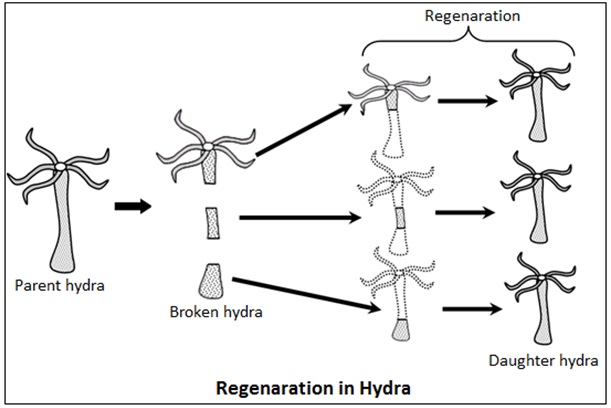 In this method the body of a simple multicellular organism breaks up into smaller pieces on maturation and each fragment develops into new individuals. 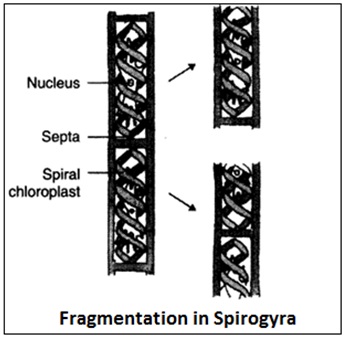 14. Longitudinal Section (LS) Of A Flower 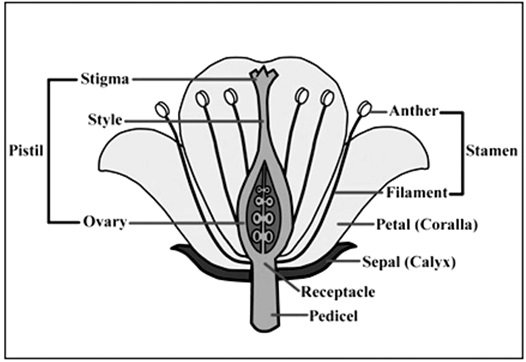 The male reproductive part of the flower is known as stamen. It consists of two subsections anther and filament which are clearly shown in the longitudinal section of flower.

15. Germination of Pollen on Stigma (Fertilisation in flowering plants)

After the pollen grain is transferred to the stigma it produces a pollen tube which passes through the style and enters the ovary and ovule. In the ovule the male germ cell fuses with the female germ cell to produce zygote. This process of formation of single celled zygote is called fertilisation. Zygote then divides several times and forms the embryo which then develops into the seed and the ovary develops into the fruit. 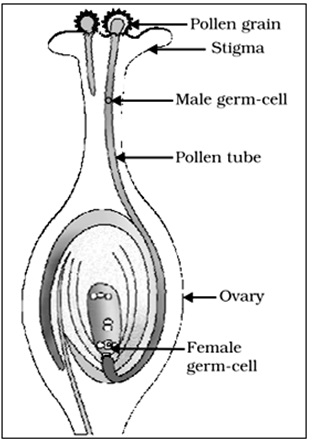 Mendel selected pea plants having two pairs of characters- shape and colour of seeds.He selected plants having round yellow seeds (RRYY) and wrinkled green seeds (rryy) and cross pollinated them. He obtained all plants with round yellow seeds (RrYy) in F1 generation. When these plants were self pollinated in the F2 generation then out of 16 plants, 9 had round yellow (RrYy) seeds, 3 had round green (Rryy) seeds, 3 had wrinkled yellow (rrYy) seeds and 1 had wrinkled green (rryy) seeds. So, in F2 generations 4 different traits wrinkled-yellow, round-yellow, wrinkled-green seeds and round-green were obtained in the ratio 9:3:3:1. 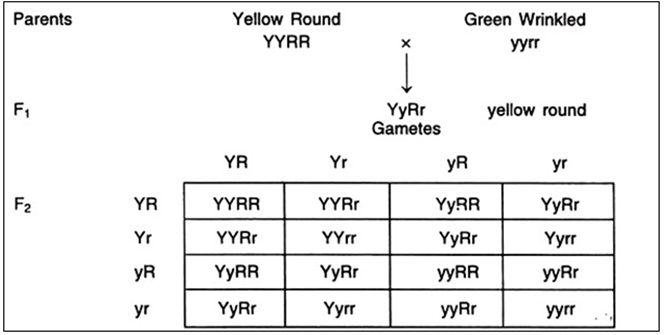 Learning biology not just depends on mugging up various terminologies but also on the distinct understanding of diagrams involved in the subject. Therefore, it is quite important that students understand and practice all the important diagrams with proper labelling.