If you have been paying attention to the lessons taught and preparing, your wait to test your preparation can be considered over because the sample paper can help you analyse how well prepared you are.

On the contrary, if you haven't begun your preparations yet, we have your back. Do not jump straight into the sample paper because it will only cause you to feel unnecessary panic. You still have ample time at hand to start now.

Start with the latest syllabus prescribed by the board.

Next, cover each and every topic in the prescribed NCERT textbook.

The sample paper begins with a few instructions which are very crucial to avoid silly mistakes which can make you lose marks.

The general instructions to be followed by the candidates attempting CBSE Class 10 Social Science Sample Question Paper 2022-23 are as follows:

Q1. What helped in the colonisation of Asian and African countries? Identify the correct statement from the following options.

Q2. Which of the following newspaper was started by Bal Gangadhar Tilak?

Q3. Look at the picture given below. Identify the name of the painter of this painting from the following options. 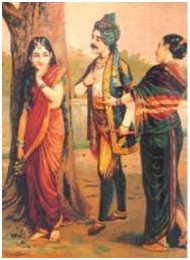 Note : The following question is for Visually Impaired Candidates only in lieu of Q. No. 3

Who among the following was the author of the book ‘Gita Govind’?

Q5. Identify the crop with the help of the following information

Q6. Which of the following description of forest is NOT correct?

Q8. Consider the following statements regarding power sharing arrangements in Belgium and identify the incorrect one from the following:

Q9. Which one of the following subjects comes under the legislation of Centre and State in India?

Q10. Which of the following statement is true regarding Feminist Movements?

Q11. Which one among the following pairs is correctly matched?

Q12. There are two statements marked as Assertion (A) and Reason (R). Mark your answer as per the codes provided below:

Assertion (A): Democracy is an accountable, responsive and legitimate government

Reason (R): Democracies have regular, free and fair elections and decision-making is based on

Q13. Which one of the following religions was protected and fostered by Sri Lankans in their constitution?

Q14. Read the given data and find out children of which state has attained maximum elementary school education?

How much percentage of girls are not attending school?

Q16. Find the odd one out from the following options:

Q18. Read the information given below and select the correct option

Rohan has taken a loan of Rs.5 lakhs from the bank to purchase a house on 12% rate of interest. He has to submit papers of new house and salary record to the bank. What is this process called as?

Q19. Which of the following international agencies allow free trade and work on mutual trade between countries?

Q21. Analyse any two factors that were responsible for the Great Depression in America during 1929.

Q22. Mention the provisions that constitute India into a secular country.

Suggest any two ways to improve the usage of Solar energy.

Q24. In what ways Government can increase employment in the rural sector?

Q25. How was the social and political situation of India affected by the First World War? Explain.

How did the Indian merchants and industrialists relate themselves to the Civil Disobedience Movement? Explain.

Q26. Examine the factors that influence the distribution pattern of the railway network in India.

Q27. In what ways Multi National Corporation (MNC) different from other companies? Explain with an example.

Q29. ‘Tertiary sector is different from other sectors.’ Justify the statement with suitable arguments.

Q30. Highlight the various measures and practices that French revolutionaries introduced to create a sense of collective identity amongst the French people.

Highlight the role of Otto Von Bismarck in making of Germany.

Q31. ‘Manufacturing sector is considered as the backbone of general and economic development.’ Examine the statement in the context of India.

Examine the multi-pronged aspects of Information Technology and Electronics Industry.

Q32. Describe the role of political parties in India.

Describe the necessity or utility of political parties in democratic countries.

Q33. Explain the role of Self-Help Groups (SHGs) in the rural society.

Explain the significance of The Reserve Bank of India in the Indian economy.

Q34. Read the source given below and answer the question that follows:

Will Thorne is one of those who went in search of seasonal work, loading bricks and doing odd jobs. He describes how job-seekers walked to London in search of work:

‘I had always wanted to go to London, and my desire … was stimulated by letters from an old workmate … who was now working at the Old Kent Road Gas Works … I finally decided to go… in November, 1881. With two friends I started out to walk the journey, filled with the hope that we would be able to obtain employment, when we get there, with the kind assistance of my friend … we had little money when we started, not enough to pay for our food and lodgings each night until we arrived in London. Some days we walked as much as twenty miles, and other days less. Our money was gone at the end of the third day … For two nights we slept out – once under a haystack, and once in an old farm shed … On arrival in London we tried to find … my friend… but … were unsuccessful. Our money was gone, so there was nothing for us to do but to walk around until late at night, and then try to find some place to sleep. We found an old building and slept in it that night. The next day, Sunday, late in the afternoon, we got to the Old Kent Gas Works, and applied for work. To my great surprise, the man we had been looking for was working at the time. He spoke to the foreman and I was given a job.’

Quoted in Raphael Samuel, ‘Comers and Goers’, in H.J. Dyos and Michael Wolff, eds, The Victorian City: Images and Realities, 1973.

34.1 Analyse the major factor which led London become an attractive place for the job seekers.

34.2 Analyse the reason for the appointment of Will Thorne by the Old Kent Gas works.

34.3 Examine the preference of hand labour over machines by the industrialists of the Victorian Britain.

Q35. Read the given extract and answer following questions

Narmada Bachao Andolan or Save Narmada Movement is a Non-Governmental Organisation (NGO) that mobilized tribal people, farmers, environmentalists and human rights activists against the Sardar Sarovar Dam being built across the Narmada river in Gujarat. It originally focused on the environmental issues related to trees that would be submerged under the dam water. Recently it has re-focused the aim to enable poor citizens, especially the oustees (displaced people) to get full rehabilitation facilities from the government.

People felt that their suffering would not be in vain… accepted the trauma of displacement believing in the promise of irrigated fields and plentiful harvests. So, often the survivors of Rihand told us that they accepted their sufferings as sacrifice for the sake of their nation. But now, after thirty bitter years of being adrift, their livelihood having even being more precarious, they keep asking: “Are we the only ones chosen to make sacrifices for the nation?”

Source: S. Sharma, quoted in In the Belly of the River. Tribal conflicts over development in Narmada valley. A. Baviskar. 1995.

35.1 With what objective ‘Sardar Sarovar Dam’ was built?

35.2 Analyse the reason of protest by the tribal people.

35.3 Highlight the issues on which ‘Save Narmada Movement’ worked on.

Q36. Read the given extract and answer following questions.

Power sharing arrangements can also be seen in the way political parties, pressure groups and movements control or influence those in power. In a democracy, the citizens must have freedom to choose among various contenders for power. In contemporary democracies, this takes the form of competition among different parties. Such competition ensures that power does not remain in one hand. In the long run, power is shared among different political parties that represent different ideologies and social groups. Sometimes this kind of sharing can be direct, when two or more parties form an alliance to contest elections. If their alliance is elected, they form a coalition government and thus share power. In a democracy, we find interest groups such as those of traders, businessmen, industrialists, farmers and industrial workers. They also will have share in governmental power, either through participation in governmental committees or bringing influence on the decision-making process.

36.1 ‘Power sharing is an essential component of democracy.’ Give one example to prove the statement.

36.2 How is alliance building an example of power sharing?

36.3 How Political parties, pressure groups and movements help in controlling or influencing those who are in power?

Q37. 37a. Two places A and B have been marked on the given outline map of India.

Identify them and write their correct names on the lines drawn near them.

37b. On the same outline map of India locate and label any THREE of the following with suitable Symbols.

Note: The following questions are for Visually Impaired Candidates only in lieu of Q. No.37. Attempt any FIVE questions.

37.1 Name the Place where the session of Indian National Congress was held in September 1920.

37.3 Name the State where Hirakud Dam is located.

37.4 Name the State where Tarapur nuclear plant is located.

37.5 Name the State where Noida Software Technology Park is located.

37.6 Name the State where Kochi ‘Sea Port’ is located. 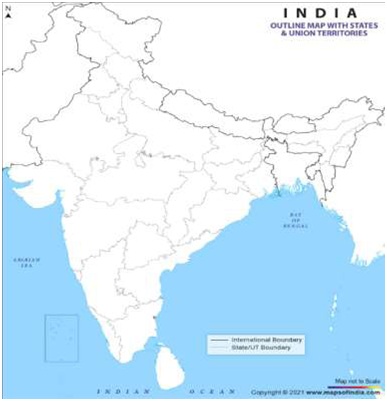 CBSE Class 10 Social Science Sample Paper 2022-23 in pdf format, if you would like to download and print.

The marking scheme of the CBSE Class 10 Social Science Sample Paper 2022-23 in pdf format is attached below.

Using the CBSE Class 10 Social Science Sample Paper 2022-23 and the marking scheme, students can be more confident to get more marks.

How will the Sample Question paper for Social Science in Class 10 CBSE 2022-23 help in my exam preparation?

By solving the CBSE Class 10 Social Science Sample Paper 2022-23, students can get an understanding of what are the different types of questions asked. Based on that, the students can approach each chapter in a planned and strategic manner. In fact, sample papers can draw their attention to various important concepts which they might have missed otherwise. While solving sample papers, they will come to know how the actual board exam would feel like which can also make students feel less nervous.

How many units are in CBSE class 10 social science syllabus? Is Map work included in syllabus?

There are 4 units, namely, India and the Contemporary World II, Contemporary India II, Democratic Politics - II, and Understanding Economic Development. Yes, map work is included in the syllabus and carries an overall weightage of 6.25% (5 marks out of 80) in the question paper design.