(ii)  Glycosidic linkage: The two monosaccharide units are joined together through an ethereal or oxide linkage formed by loss of a molecule of water.

(iii) Invert Sugar: An equimolar mixture of glucose and fructose obtained by hydrolysis of sucrose in the presence of an acid such as dil. HCl or the enzyme invertase or sucrase is called invert sugar.

(iv) Polypeptides: They are formed when several molecules of a-amino acids are joined together by peptide bonds.

(a)Name two water-soluble vitamins along with their sources and the diseases caused due to their deficiency in the diet.

(b) Name two fat-soluble vitamins along with their sources and the diseases caused due to their deficiency in the diet.

(a)Name the four bases present in DNA. Which one of these is not present in RNA?

(b)  essential and non-essential amino acids in human food.

(c) the amine produced by the Hoffmann degradation of benzamide.

In RNA, Thymine (T) is absent. It has Uracil (U) in place of Thymine.

Question 4- : (a) Differentiate between the following :

(i) nucleoside and nucleotide

(iii) a-helix and P-pleated sheet structure of the protein

Answer: (a) (i)  A nucleoside contains only two basic components of nucleic acids, i.e., a pentose sugar and a nitrogenous base. It is formed by the attachment of a base to V position of the sugar while A nucleotide contains all the three basic components of nucleic acids, i.e., a phosphoric acid group, a pentose sugar and nitrogenous base. These are formed by the esterification of C5—OH of the sugar of the nucleoside with phosphoric acid. 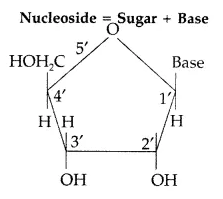 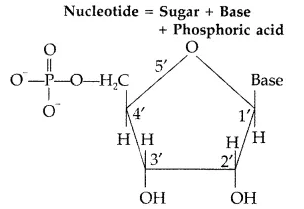 Question 5- (i) Write the name of two monosaccharides obtained on hydrolysis of lactose sugar.

(ii) Why Vitamin C cannot be stored in our body?

(iii) Write the structural difference between starch and cellulose.

Answer: (i) On hydrolysis, lactose gives β-D-galactose and β-D-glucose.

(ii) Vitamin C is mainly ascorbic acid which is water-soluble and is readily excreted through urine and thus cannot be stored in the body.

Question 6- How are vitamins classified? Name the vitamin responsible for the coagulation of blood.

Answer: Vitamins are classified into:

These were some of the important questions from previous year question paper, sample papers and the NCERT textbooks. Students can also check other important articles from the links given below: