This article is a continuation of the revision notes on CBSE Class 12 Chemistry, Chapter  - Aldehydes, Ketones and Carboxylic Acids. Most of the important concepts are covered in the Part I. In this part we will focus on important chemsical reactions of Aldehydes and Ketones.

o    Test to Distinguish between Aldehyde and Ketones

o    Uses of Aldehyde and Ketones

Chemical Reactions of Aldehydes and Ketones

Some important reactions involving the nucleophilic attack are given below:

This reaction is used for the separation and purification of aldehydes and ketones. This is because the addition compound formed above is water soluble and can be converted back to the original carbonyl compound by treating it with dilute mineral acid or alkali.

Addition of ammonia and its derivatives:

Aldehydes on addition of monohydric alcohol in presente of dry HC1 forms hemiacetal which further on reacting with one more molecule of alcohol turns to and acetal.

(b) Reduction of aldehydes and ketones:

Reduction to alcohols: Aldehydes and ketones are reduced to primary and secondary alcohols respectively by sodium borohydride (NaBH4) or lithium aluminium hydride (LiAlH4) 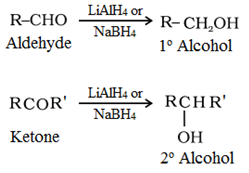 (c) Oxidation of Aldehydes and Ketones:

Due to the presence of hydrogen at carbonyl carbon, aldehydes are easily oxidisable while ketones are difficult to oxidise.

Ketones are oxidized under drastic conditions i.e. with powerful oxidising agents like HNO3, K2Cr2O7/H2SO4, KMnO4/H2SO4 at higher temperature to give a mixture of acids, each containing lesser number of carbon atoms than the parent ketones.

Methyl ketones are oxidized with X2/NaOH to sodium salts of corresponding carboxylic acids having one carbon atom less than that of carbonyl compound.

(d) Reactions of aldehydes and ketones due to α -hydrogen:

Aldehydes which do not have an α -hydrogen atom undergo self-oxidation and reduction (disproportionation) reaction on treatment with concentrated alkali to form alcohol and salt of acid.

Test to Distinguish between AKdehyde and Ketones

Uses of aldehydes and ketones:

•    Aldehyde is mostly used in the formation of resins when it is combined with melamine, urea, phenol etc.

•    Formaldehyde in the form of formalin (40%) solution, is used to preserve biological specimens.

•    Benzaldehyde is used in perfumery and in dye industries.

•    Acetophenone is used as ingredients in flavours and deodorants.

•    Ketones are used as solvents and intermediates in the chemical industry.