•     Capacitance of a Capacitor

•     Capacitance of an Isolated Conducting Sphere

•     Parallel Plate Capacitor and Its Capacitance

•     Effect of Conductors in Capacitor

•     Effect of Dielectrics in Capacitor

•     Total Energy of the combination of capacitors

Dielectrics are non-conducting substances. In contrast to conductors, they have no (or negligible number of) charge carriers.

Dielectrics are of two types:

(ii) Polar Dielectrics: When the centre of positive and negative charges do not coincide because of the asymmetric shape of the molecules, e.g., NH3, HCl etc.

It is an arrangement of primarily two conductors for storing large amount of electric charge.

Capacitance of a Capacitor:

Capacitance (C) of a capacitor is defined as ratio of charge (Q) given to the potential difference (V) applied across the conductors, i.e., C = Q/V.

The SI unit of capacitance is farad (F).

Capacitance of an Isolated Conducting Sphere:

Parallel Plate Capacitor and Its Capacitance: 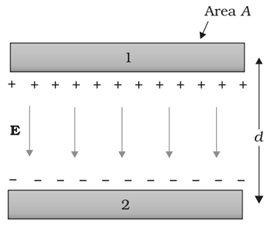 Parallel plate capacitor is an arrangement of two large metal plates of area A each kept parallel to each other at a distance d apart. If the space between the plates is vaccum (or air) then the capacitance of such an arrangement is given by,

In parallel arrangement the potential difference across the each capacitor will remain same.

Effect of Conductors in Capacitor

When a parallel plate capacitor is partially filled with a metallic slab of thickness t < d, its capacitance will be:

Effect of Dielectrics in Capacitor

When a dielectric slab of dielectric constant K having thickness t < d is placed between the plates of parallel plate capacitor.

The capacitance of the capacitor will be,

Energy stored (U) in capacitor (C) charged to a potential difference V is given as,

Total Energy of the combination of capacitor:

If C1and C2 are capacitors charged to potentials V1 and V2 respectively. These capacitors are connected by a conducting wire, charges flow from higher potential to lower potential. This flow of charge will continue till their potentials become equal. There will no charge is lost in sharing and their common potential is given by,