In this article you will get CBSE Class 9 Science chapter, Atoms and Molecules: Important topics and questions to prepare for CBSE Class 9 Science Examination, 2017-2018. All the questions have been prepared to cover most of the important topics included in chapter- Atoms and Molecules. Moreover theimportant terms and topics mentioned in this article will make your preparation for exam easy and organised. 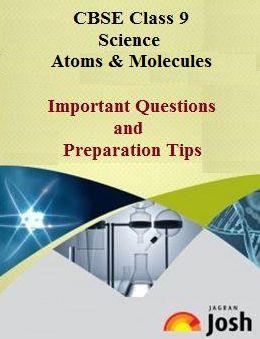 Get the CBSE Class 9th Science chapter, Atoms and Molecules: Important topics and questions to prepare for CBSE Class 9 Science Examination, 2017-2018. This will provide you with a very clear idea about what type of questions are being framed for the exam and from which topics. The pattern in which the Question Paper is set is quite different from the style in which the course structure is actually defined. Consider the below mentioned terms/questions at the time of preparation.

Check out the important terms/topics given below:

• Name of scientists who established the two important laws of chemical combinations?

• Write the chemical formulae of the given compounds:

• E = mc2 follows the law of conservation of mass or not

• 2.8 gram of N2 gas was allowed to react with 0.6 gram of hydrogen gas to produce 3.4 gram of ammonia. Show that these observations are in agreement with the law of conservation of mass

• Which postulate of Dalton’s atomic theory is the result of the law of conservation of mass?

• Which postulate of Dalton’s atomic theory can explain the law of definite proportions?

• Name of atoms and their symbols

• Concept of atomicity and its formula to calculate the same

• Definition of isotopes, isotones, and isobars with examples

• Identify the isotopes, isotones, and isobars from the given pairs

• Find the atomicity of chlorine if its atomic mass is 35.5 and molecular mass is 71

• A very fine study about the mole concept. Different ways to calculate the number of moles

• Concept of ion formation and generation of positive and negative charges

• Cross valency concept to write the formula of compound

Q. Magnesium and oxygen combine in the ratio of 3:2 by mass to form magnesium oxide. How much oxygen is required to react completely with 12 g of magnesium?

Q. Which postulate of Dalton’s atomic theory is the result of the law of conservation of mass?

Q. Which of the following statements is NOT true about an atom?

(a) Atoms are the building blocks from which molecules and ions are formed.

(c) Atoms are neutral in nature.

(d) Atoms combine together to form matter that we can see, feel, or touch.

Q. A sample of vitamin C is known to contain 2.58 ×1024 oxygen atoms. How many moles of oxygen atoms are present in the sample?

Q. Write the chemical formulae of the following.