Here you will get important very short answer type questions for CBSE class 9 Science Annual Exam 2020. Each question has been provided with an appropriate answer. 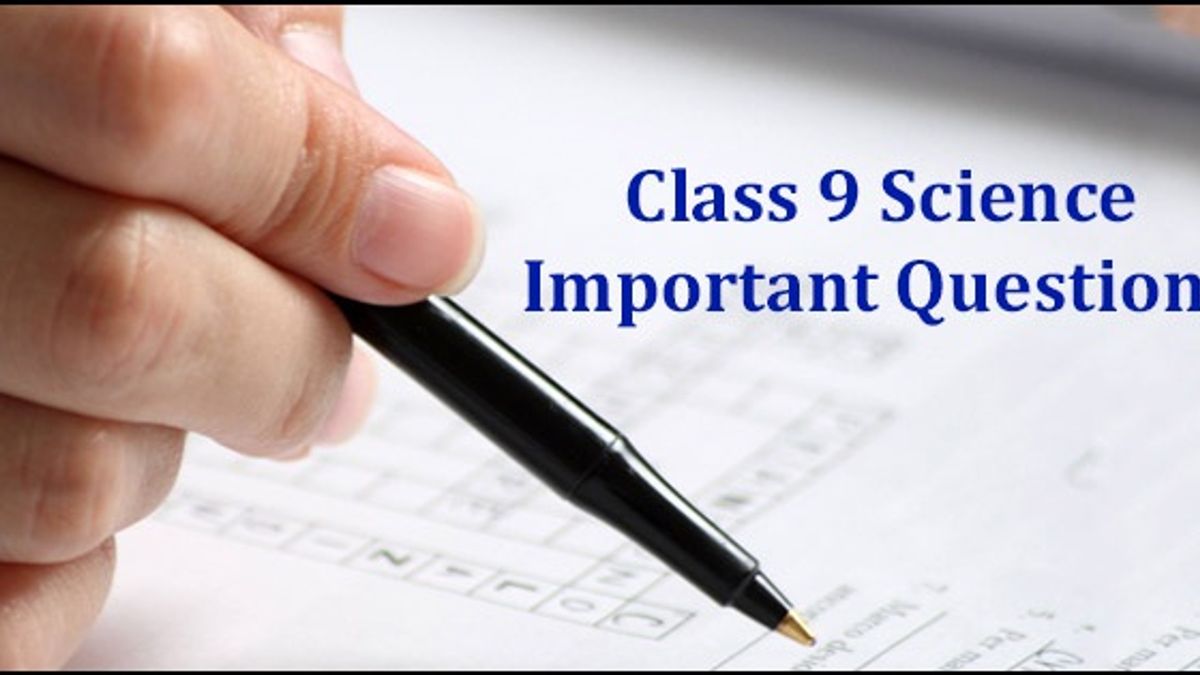 Just reading the chapters and mugging the concepts and theories is not enough to get prepared for the exams. Solving problems based on those concepts is necessary to understand their application. So, we are providing here a set of important questions to prepare for Class 9 Science Annual Exam 2020. These are the questions which must be practiced to attempt the 1 marks questions in exam with ease and precision.

Question number 1-14 in Section-A of Science paper will be all one mark questions. These questions will be asked in different formats like very short answer type questions, multiple choice type questions, etc. Practicing with the important questions provided below, will certainly help you answer different questions appropriately by strengthening your fundamental concepts.

Given below are some very important questions for ‘very short answer type questions’ category in class 9 Science exam 2018:

The process in which taste and smell of food gets spoiled is called rancidity. It happens due to oxidation.

2. Name the particles which determine the mass of an atom.

4. Mention two uses of isotopes in the field of medicine.

(i) An isotope of cobalt is used in the treatment of cancer.

(ii) An isotope of iodine is used in the treatment of goitre.

5. Name the characteristics of sound wave on which the following properties depend?

(a) Loudness depends on amplitude

(b) Pitch depends on frequency.

6. Write any two charateristics of the animals belonging to phylum chrodata.

Two charateristics of the animals belonging to phylum chrodata are:

(i) They are bilaterally symmetrical, triploblastic and have body cavity.
(ii) They exhibit notochord, a flexible rod between the nerve cord and the digestive track, at some stages during development.

7. Who discovered vaccine for the first time?

8. Alloy cannot be separated by physical means, though it is considered a mixture. Why?

Alloys are homogeneous mixtures of metals and cannot be separated into their components by physical methods. But still, an alloy is considered as a mixture because it shows the properties of its constituents and can have variable composition.

10. What do you mean by the planetary electrons?

Rutherford compared his model of an atom with our solar system where the nucleus is like the sun and the electrons are like the planets. Thus, these electrons are also called planetary electrons.

11. What is a thallus? Why are thallophytes called non-embryonic plants?

Thallophyte has a simple plant body structure with no distinct root system, stem and leaves. Such simple body is called thallus.

Thallophytes have unicellular gametes. After fertilisation, the zygote does not form an embryo. Therefore, these plants are called non-embryonic plants.

12. Why did Rutherford select a gold foil for his experiment?

Rutherford selected a gold foil for his experiment as he wanted a very thin layer and gold is highly malleable.

13. Why do fish go in deep waters during day light?

14. Name two properties of a substance to check its purity?

15. What is meant by warm-blooded and cold-blooded animals?

16. State the utility of tissues in multi-cellular organism.

We see division of labour in multi-cellular organism as a particular function is carried out by a cluster of cells (tissue) at a definite place in the body. The tissues are arranged and designed in such a way that they give the highest possible efficiency of function.

17. What do you mean by intensive and extensive properties of matter?

Extensive properties, such as mass and volume, depend on the amount of matter being measured.

Intensive properties, such as density and color, do not depend on the amount of the substance present.

Now by law of conservation of mass,

19. State the types of meristems present in plants, on the basis of position.

On the basis of location of meristems, it classified as follows:

20.  What are intermolecular forces? How are these related to the three states of matter?

Intermolecular force: It is the force operating between the atoms or molecules of a matter.

In case of solids this force keeps the constituent particles very close to each other and gives them an ordered arrangement of resulting into a regular geometrical shape in solids.

In liquid, intermolecular force is weak to give definite shape.

In gas, intermolecular force is negligible and so its constituent particles are free to move and occupy the available space.

21. (a) On the basis of Thomson’s model of an atom, explain how the atom is neutral as a whole?

(b) Where are electrons found in the atom?

(b) Electrons are found in shells or orbitals that surround the nucleus of an atom.

22. (a) Which postulate of Dalton’s atomic theory is the result of law of conservation of mass?

(b) Name the term which is used for the symbolic representation of a molecule of an element or a compound? Give an example of it.

(a) The postulate that “atoms can neither be created nor destroyed in a chemical reaction” is the result of the law of conservation of mass.

(b) The symbolic representation of a molecule of an element or a compound is known as chemical formula. For example, molecular formula of water is H2O.

23.(a) Write two points of difference between amphibians and reptiles.

(b) Mention two characteristics which help amphibians to survive on land.

(a) Difference between amphibians and reptiles is stated below:

(b) Two characteristics which help amphibians to survive on land are:

24. (a) Name any two abiotic factors that make soil.

(b) What would happen if all the oxygen of the environment is converted to ozone?

(b) Ozone is a poisonous gas which is present in the stratosphere in the form of a thin layer in. lf all the oxygen is converted to ozone, the environment will become poisonous and kill all living forms.

25. What are the two ways to treat an infectious disease?

(ii) Reduce the effects of the disease.

26. (a) State any two conditions essential for good health.

(b) How are antibiotics effective in treatment of some diseases?

(a) Two conditions that are essential for good health are:
(i) Proper nutrition and a blanced diet
(ii) Good Social environment.

27. How is loudness of volume distinguished from its intensity?

Sound intensity is the amount of energy carried by sound whereas loudness is a measurement of the audible sound.

29. In which two categories, the organisms are divided on the basis of evolution? How are the two categories different from each other?

On the basis of evolution, the organisms are divided into two categories :
(a) ‘Primitive’ or ‘lower’ organisms
(b) ‘Advanced’ or ‘higher’ organisms
Advanced organisms are the result of gradual development of more complex organisms from the simpler ones i.e., primitive organisms.

30. Write the features which formed the basis for grouping the organisms into five kingdoms.

Answer. The basis for grouping organisms into five kingdoms depends on their:

(a) Cell structure.
(b) Mode and source of nutrition.
(c) Body organisation