Get here Important MCQs on Class 10 Science Chapter 4 - Carbon and its Compounds to help you prepare for the Board Exam 2021-2022.

Get the MCQs for CBSE Class 10 Science Chapter 4 Carbon and its Compounds. All these questions are provided with answers and their detailed explanation. Check the MCQs provided below to get an idea of the type of questions to be asked in the CBSE Class10 Science Board Exam 2021-2022.

MCQs from CBSE Class 10 Science Chapter 4: Carbon and its Compounds

1. Which of the following structures correctly represents the electron dot structure of a chlorine molecule? 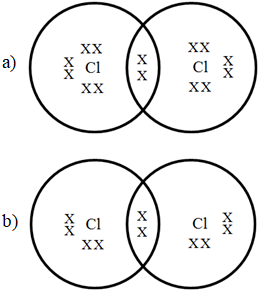 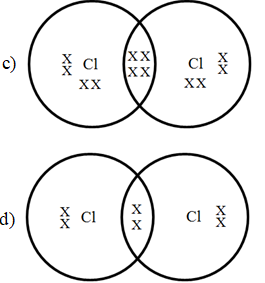 Explanation: In an electron dot structure of a molecule there must be shown eight electrons (in the form of dots or crosses) around each element of the molecule, to represent the complete octet of the element.

2. While cooking, if the bottom of the vessel is getting blackened on the outside, it means that:

a) The food is not cooked completely

b) The fuel is not burning completely

c) The fuel is wet

d) The fuel is burning completely

Answer: (b) The fuel is not burning completely

Explanation: In case the fuel doesn’t burn completely, i.e., there is not enough oxygen to react with the carbon to produce carbon dioxide, then the unburnt carbon particles are left behind in the form of black particles known as soot. These soot particles stick to the bottom of the vessel making it black.

3. Cation is formed when:

c) Proton is lost by the atom

Explanation: A cation is formed by loss electrons from the atom of an element which acquires positive charge due to the presence of greater number of protons as compared to that of electrons.

Explanation: As the compound, CH3CH2CH=CH2 contains four carbon atoms and a double bond attached to the first carbon, so the I.U.P.A.C name of CH3CH2CH=CH2 is But-1-ene.

5. Which of the following compounds of carbon does not consist of ions?

In CHCl3, all the three chlorine atoms are bonded covalently to the carbon atom, not to the hydrogen atom. So CHCl3 is a covalent compound and does not consist of ions.

6. The property of self-linkage among identical atoms to form long chain compounds is known as:

Explanation: Catenation is the property of self-linking of an element by which an atom combines with the other atoms of the same element to form long chains.

7. Which of the following is the molecular formula of cyclobutane?

Explanation: Cyclobutane is a cyclic hydrocarbon consisting of four carbon atoms where each carbon atom is attached to the two other carbon atoms and two hydrogen atoms, as shown below:

8. Which of the following statements about graphite and diamond is true?

a) They have the same crystal structure

b) They have the same degree of hardness

c) They have the same electrical conductivity

d) They can undergo the same chemical reactions

Answer: (d) They can undergo the same chemical reactions

Explanation: Both Graphite and diamond being the allotropes of the same element , carbon, have similar chemical properties. So they undergo the same chemical reactions.

9. How many number of carbon atoms are joined in a spherical molecule of buckminsterfullerene?

Explanation: Buckminsterfullerene is a molecule of carbon in the form of a hollow sphere consisting of 60 C-atoms and is having the formula C60.

10. Which of the followings is the major constituent of the liquefied petroleum gas?

Explanation: The major constituent of the liquefied petroleum gas is butane.

11. The organic compounds having functional group are known as:

12. From which of the following substance pencil lead is formed?

Explanation: Pencil lead is formed of graphite. Graphite is an allotropic form of carbon in which each carbon atom is joined to three others, forming layers: 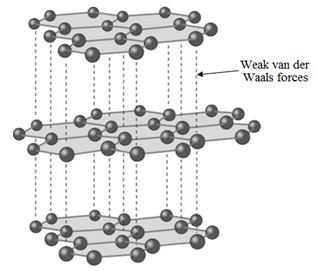 These layers are put together by weak van der Waals forces which enable the layers to slide over each other, making graphite soft and slippery. So graphite is used as pencil ‘lead’. As the pencil moves across the paper, layers of graphite rub off leaving the dark marks on paper.

13. Ester is formed by the reaction between:

a) An acid and an alcohol

b) An acid and a base

c) A base and an alcohol

d) An acid and an alkene

Answer: (a) An acid and an alcohol

Explanation: Reaction between an acid and an alcohol results in the formation of ester, and the reaction is named as estrification.

For example: Acetic acid reacts with ethyl alcohol in the presence of concentrated sulphuric acid to form Ethyl acetate:

14. What is denatured alcohol?

c) Alcohol having properties of an acid

Answer: (a) Ethyl alcohol which has been made unfit for drinking purpose by adding small amount of poisonous substance

15. Which of the following substance produces brisk effervescence with baking soda solution?

Check below some other important articles which will help you make effective preparations for the CBSE Class 10 Board Exam 2021-2022: