NCERT Solutions for Class 12 Biology, Chapter 3 (Human Reproductions) are available here. In this chapter, there are 23 questions. Here, you will find detailed explanations for each question. You can also download the complete NCERT solutions of the chapter in PDF format.

NCERT solutions for Class 12 Biology, Chapter 3: Human Reproductions are available here. Important topics of this chapter are: The Male Reproductive System, The Female Reproductive System, Gametogenesis, Menstrual Cycle, Fertilisation and Implantation, Pregnancy and Embryonic Development, Parturition and Lactation. 23 Questions are given at the end of this chapter and most of the questions are based on these topics. These topics are important for CBSE Class 12 board exam 2018 as well as medical entrance examinations like CBSE NEET.

Question1. Fill in the blanks:

k) The structure which provides vascular connection between the foetus and uterusis called __________. 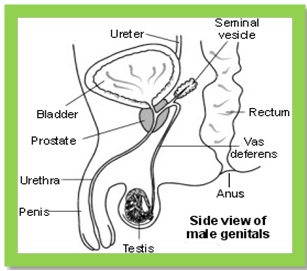 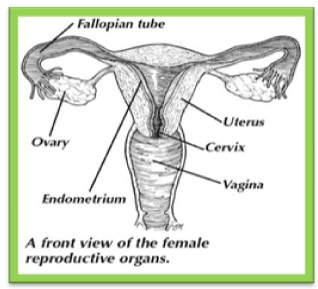 Question4. Write two major functions each of testis and ovary.

Two major functions of testis are:

(a) It produces sperms.

(b) It provides nutrition to germ cells and secretes androgens.

Two major functions of ovary are:

Question5. Describe the structure of a seminiferoustubule.

Seminiferous tubules are lined by two types of cells, spermatogonia and sertoli cells from inside. Spermatogonia cells form sperms through mitotic division, while nutrition to germ cells is provided by sertoli cells. The regions outside the seminiferous tubules called interstitial spaces which contain small blood vessels and Leydig cells, androgens are secreted from Leydig cells.

As the puberty starts, sperms are produced by immature male germ cells through spermatogenesisin testis. Spermatogenesis is a process in which undifferentiated diplod germ cells produces and differentiate the haploid cells in animals producing sexually.

Question7. Name the hormones involved in regulation of spermatogenesis.

The transfer of spermatids into sperms is called spermiation.

After spermiogenesis, sperm heads become embedded in sertoli cells and are finally released from the seminiferous tubules by the process called spermiation.

Question10. What are the major components of seminal plasma?

Fructose, calcium and certain enzymes are the main components of seminal plasma.

Question11. What are the major functions of male accessory ducts and glands?

They store and transport the semen into urethra from testis.

Question12. What is oogenesis? Give a brief account of oogenesis.

The process of formation of mature female gamete in ovaries is called oogenesis. Initial step is the production of egg which starts prior to birth.Oogonia is formed through mitosis. Oogonia is a diploid cell which develops into primary oocyte through first step of meiotic division. These oocyte develops (one at a time) and when primary oocyte develops, it undergoes meiosis-1 and forms a large secondary oocyte with a small polar body.

Meiosis-2 does not take place in first polar body,where as secondary oocyte enters metaphage stage of meiosis 2. But for completing second meiosis, it awaits for arrival spermatozoa. As sperm enters, it restarts the process of cell cycle by breaking down MPF and turning on APCC. After this, meiosis-2 completes and secondary oocyte converted into fertilized egg or zygote.

Question13. Draw a labelled diagram of a section through ovary. 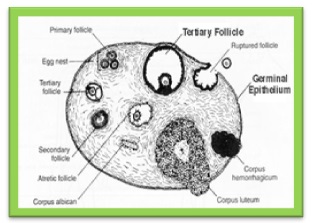 Question14. Draw a labelled diagram of a Graafian Follicle? 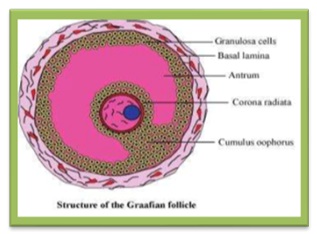 Question15. Name the functions of the following.

(a) Corpus luteum :- It secretes progesterone. Progesterone is essential for maintenance of endometrium.

(b) Endometrium :- Implantation of fertilized ovum and many events of pregnancy takes place in endometrium.

(c) Acrosome: - It is filled with enzymes that help in fertilisation of ovum.

(e) Fimbriae: - After ovulation, it helps in collection of ovum.

(a) Androgens are produced by Sertoli cells. (True/False)

(b) Spermatozoa get nutrition from Sertoli cells. (True/False)

(g) Presence or absence of hymen is not a reliable indicator of virginity or sexual experience. (True/False)

In human beings, at an average internal of 28-29 days menstruation is repeated and menstrual cycle of events that takes place from one menstruation till the next one.

Estrogen plays an important role in menstrual cycle. When FSH level increases, it stimulates the growth of ovarian follicles and formation of estrogens.

Question18. What is parturition? Which hormones are involved in induction of parturition?

Question19. In our society the women are often blamed for giving birth to daughters. Can you explain why this is not correct?

Question20. How many eggs are released by a human ovary in a month? How many eggs do you think would have been released if the mother gave birth to identical twins? Would your answer change if the twins born were fraternal?

One ovum is released by a human ovary in a month.

If the twins are fraternal twins then they must have been developed from two eggs.

Question21. How many eggs do you think were released by the ovary of a female dog which gave birth to 6 puppies?

Dogs are polyovulatory and they releases more than one ovary at a time. So, a female dog releases six ovaries to give birth to six puppies.