Download Chapter 3 - The Delhi Sultans of NCERT Book for Class 7 History (Social Science) textbook in PDF format. It is an important of the Class 7 History (SST) NCERT textbook & questions from this chapter are often asked in this CBSE School exams.

A snapshot from the chapter: 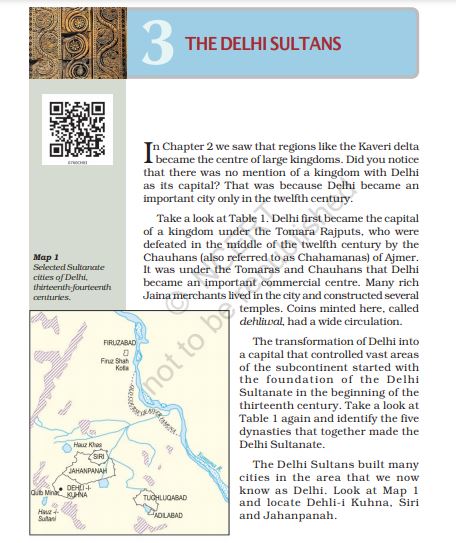 Important topics from NCERT Book for Class 7 History (Chapter 3 - The Delhi Sultans) from which questions are frequently asked:

Important keywords & topics of NCERT Book for Class 7 History (Chapter 3 - The Delhi Sultans) from which questions have been frequently asked in the exams:

⇒ Finding Out about the Delhi Sultans

⇒ The circle of justice

⇒ From Garrison Town to Empire

⇒ The Expansion of the Delhi Sultanate

⇒ Chieftains and their fortifications

⇒ The Sultanate in the Fifteenth and Sixteenth Centuries

⇒ The “Three Orders”, the “Peace of God”, Knights and the Crusades

⇒ Which ruler first established his or her capital at Delhi?

⇒ What was the language of administration under the Delhi Sultans?

⇒ In whose reign did the Sultanate reach its farthest extent?

⇒ From which country did Ibn Battuta travel to India?

⇒ According to the “circle of justice”, why was it important for military commanders to keep the

interests of the peasantry in mind?

⇒ What is meant by the “internal” and “external” frontiers of the Sultanate?

⇒ What were the steps taken to ensure that muqtis performed their duties? Why do you think they may have wanted to defy the orders of the Sultans?

⇒ What was the impact of the Mongol invasions on the Delhi Sultanate?