All the respective RRB zones have geared up their assessment process and portals have been streamlined to announce the RRB NTPC result 2016. RRB Thiruvananthapuram zone result has been forfeited and new result will be updated soon.

All the respective RRB zones have geared up their assessment process and portals have been streamlined to announce the RRB NTPC result 2016. RRB Thiruvananthapuram zone result has been forfeited and new result will be updated soon.

The biggest online examinations ever conducted was also one of the highly searched for over internet. RRB NTPC Result 2016 is one of the most awaited result of the year which was held for recruitment to the posts of Commercial Apprentice (CA), Traffic Apprentice (TA), Enquiry-Cum-Reservation Clerk (ECRC), Goods Guard, Senior Clerk-Cum-Typist, Junior Accounts Assistant-Cum-Typist (JA A), Assistant Station Master (ASM), Traffic Assistant & Senior Time Keeper.

RRBs had announced for a massive vacancy of 18252 (non technical posts) in late 2015. Application process concluded till early 2016. The computer based test was held in the month of March-May 2016. Since the day of completion of the exam candidates had been waiting eagerly for the result. 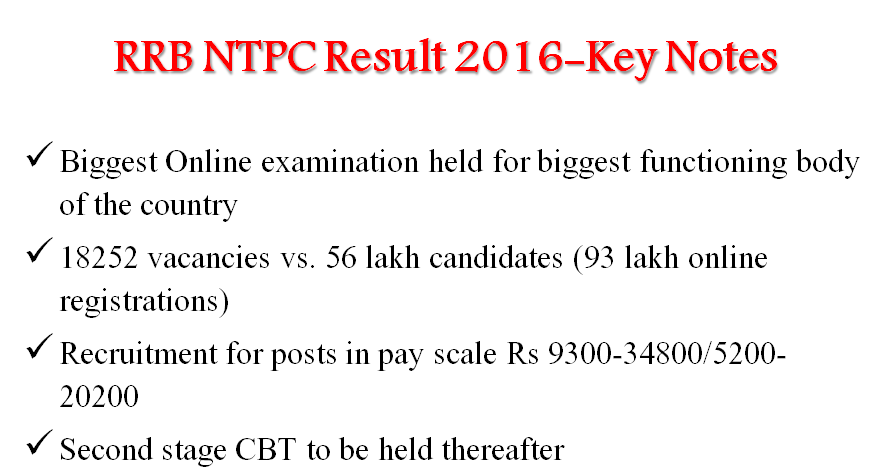 Taking the anxiety of candidates into consideration, RRBs have shown their active participation by giving timely updates. Candidates were also given an option to raise objection against the answer key in the month of August. Thus, keeping candidates engaged in the assessment process candidates, RRBs proved the transparency involved in the entire procedure.

In addition to this, the Board has announced that after the declaration of the result (1st stage computer based test/ CBT), second stage CBT will be held for those candidates who have qualified the first stage.

The second stage computer based test will comprise of questions related to General Awareness, General Intelligence and Reasoning and Arithmetic. Exam duration will be of 90 minutes.

Admit cards for the RRB NTPC second stage CBT will also be issued to candidates at least two weeks before the exam.

RRB NTPC Exam had witnessed a record breaking number of examinees. While a total of 93 lakh candidates had submitted their applications, near about 56 lakh candidates had actually appeared for it. The examination was held in 76 shifts in 1192 exam centres across the country.