CTET Admit Card for written exam on 18 September 2016 is available for download at official website ctet.nic.in. All such candidates who applied for CTET September 2016 exam can download using their registration number and other credentials. 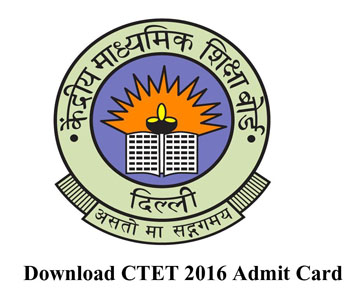 CTET 2016 Admit Card will be available for the candidates who have applied for the examination from 17 August 2016.

Central Board of Secondary Education (CBSE) will conduct the 10th Edition of Central Teacher Eligibility Test (CTET) on 18 September 2016. The online application form for CTET Sept 2016 was started from 22 June 2016.

The candidates who applied for the examination can download the e-Admit cards from the official website at ctet.nic.in by providing their registration number and other credentials.

CBSE issued a notice which stated that in case of any discrepancy/visibility or mismatch in particulars and photograph/signatures on e-Admit Card, candidates may send their request through e-mail at ctet@cbse.gov.in.