Cell phones be allowed in schools?

Cell phones have become more of a necessity than a fancy item. Even young kids can be seen carrying cell phones and smartphones, either chatting or playing some game. There is no denying that they have become a part of everyday life. In fact, life cannot be imagined without a cell phone.
But lately, it has become a hot topic whether or not to allow cell phones in schools. 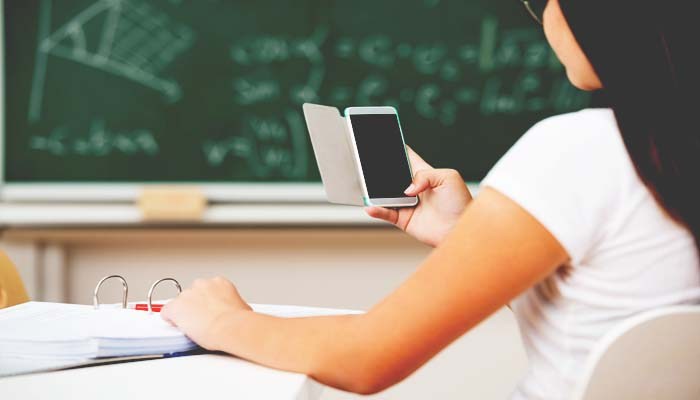 In favour of: More and more children and teenagers are getting their own cell phones as they are a very handy, cheap, and useful mode of communication. Especially in case of some emergency children can swiftly call their parents or helpline numbers like the police.

If students need something from home they can call and ask someone to bring it. This is very useful in case of homework. If the school bus or any other transport is not available they can call home and ask to be picked up.

Sometimes there might be a scenario where students have to stay back for some extra class or assignment then they can inform their parents.

Students should not only be allowed to carry cell phones but encouraged to judiciously use this wonderful new age technology. They can use their phones to keep updated whether by browsing news websites or educational portals. A low priced smartphone costs much less than a common Personal Computer or a laptop hence it would be easily affordable for many parents to give a smartphone to their children.

During a classroom session it is very much possible to miss out on certain crucial points. Here cell phones can be used to record and playback the entire content and they will not miss any point.

Against: Cell phones should not be allowed in schools as they will cause distraction for both students and teachers. Even the classes might get disturbed if any student is found fiddling with their phone. The student will be at a loss as they will not be able to keep up with the class.

Students might start browsing irrelevant, inappropriate websites and waste their time which can be utilised for studies. Also, they will be negatively influenced by the content of badly chosen sites which will hamper their overall growth, mindset, and personality.

Cell phones can be used for cheating during tests as many cases have been reported. Moreover, schools have their own telephones which students can use if needed. Phone cameras can be used for malicious purposes like for clicking inappropriate pictures or making videos that are not in a good taste.

Allowing cell phones in schools will give rise to an unhealthy, unwanted competition as students with expensive and latest model phones will overwhelm those who have got low-cost or old model phones. Not only would there be disparity within a single group but parents would be under constant pressure to get new expensive phones for their children. It is for the same reason that school students are assigned uniforms which they are required to wear everyday to school so that all students look the same without any prejudice.

Planning your career during school days is very important; here we tell you how