According to the economic survey 2017, India’s economy is converging toward the large, open, prosperous economies of the west, but its trajectory is different in a fundamental way. Here, we provide Economic Survey 2017 analysis of the fiscal framework of India for the IAS Exam 2017.

“I want the cultures of all lands to be blown about my house as freely as possible. But I refuse to be blown off my feet by any.” – Mahatma Gandhi

The Economic survey keenly observes that in the times when the advanced countries have embraced fiscal activism by giving a greater role to counter-cyclical policies, India still focuses on unique fiscal policies in the world.

Here, we provide exclusive economic survey analysis and recommendations on the fiscal framework of the world and India, which can prove to be extremely helpful in IAS exam preparation.

India’s experience has taught the opposite lessons as it has reaffirmed the need for rules to contain activism, so as to rein in excessive spending during booms and inordinate deficits during downturns, a pattern that contributed to both recent episodes of severe macroeconomic instability (1991 and 2013).

India's experience has also highlighted the risk of relying on rapid growth rather than steady primary balance adjustment to reduce debt, a strategy that has failed to place the debt-GDP ratio firmly on a downward path. These flow and stock vulnerabilities are the subject of review under the new FRBM Committee.

India is still afflicted by the twin balance sheet problem, which is holding back investment and credit growth and hence overall economic activity. India’s situation differs from that of the advanced economies in some important ways as the Indian growth rates are substantially higher, while inflation rates are also substantially greater.

As a result, monetary policy is nowhere close to the zero lower bound, reducing the need for fiscal activism. And because inflation is already relatively high, a counter-cyclical policy has to be much more sensitive to triggering higher inflation.

Perhaps a more important argument against the activist counter-cyclical policy is India’s own recent experience. The Indian economic history highlights two episodes of Indian macro vulnerability in the last 35 years (1991 and 2013) and both were associated with, even preceded by, large increases in fiscal deficits.

Let’s have a detailed look at both the crisis:

i. In the early 1980s, there was an expansion in spending and deficits in response to accelerating growth. The inability to rein in these deficits played a key role in undermining India’s external situation, which led to the balance of payments crisis of 1991.

ii. The difference between the 1991 and 2013 episodes is that in the former there was a fixed exchange rate which created a full-blown crisis, whereas in the latter the exchange rate was floating, which attenuated disruptions in other asset prices.

During the mid-2000s growth boom, new spending programs were introduced, which could not be sustained when receipts fell back to more normal levels. India’s fiscal stance has an inbuilt bias toward higher deficits, because spending rises pro-cyclically during growth surges, while revenue and spending are deployed counter-cyclically during slowdowns. This pattern creates fiscal fragility.

Fiscal rules, insofar as they can be effective and binding, therefore aim to prevent spending surges during booms and constrain counter-cyclicality during downturns.

India and the World 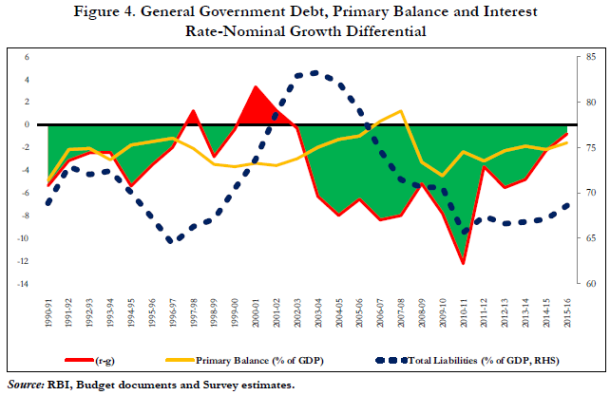 Although, India’s debt-to-GDP ratio is higher than many other emerging markets but such a mechanical comparison is not an appropriate way of assessing India’s fiscal strength. India’s framework is very different from many other emerging markets, especially those in Latin America (and Russia) which have defaulted on their domestic obligations. In the recent past, India’s highest level of debt has been 83 percent of GDP and it has made sure that its debt service obligations have been conscientiously met.

In advanced economies, low inflation rates and weak economic activity in the aftermath of the financial crises have reduced nominal growth, but at the same time, secular trends related to high savings, ageing, and a worldwide increase in demand for safe assets have reduced equilibrium interest rates, as well.

In India, things are rather different. India is on a convergence path. The country has grown at just over 6 percent in real terms for 35 years and the scope for continuing this convergence remains considerable. India can grow conservatively at about 7-8 percent for the next 15 years. This combined with an inflation target of 4±2 percent implies that nominal GDP growth over the next decade or so will be in the 11-14 percent range.

The implications for the growth interest rate differential are stark but for India the differential could be around 4-6.5 percent, reflecting the high nominal growth rates of 7-7.5 percent. As a result, debt dynamics for the next decade will be very favourable for India compared with most advanced economies and even other emerging markets.

Indian vulnerability is the country’s primary deficit that is the shortfall between its receipts and its non-interest expenditures. As a result, the government is dependent on growth and favourable interest rates to contain the debt ratio. In fact, in the aftermath of the GFC, as growth slowed and disinflation occurred, debt levels started to rise again.

This contrast between India’s primary balance position and that of other countries reflects a deeper point. India normally undertakes policy-related fiscal adjustment only gradually. Aside from crisis periods, the fiscal position has only improved sustained when it has benefitted from windfalls, arising from exceptional growth or major declines in oil prices that allow for lower petroleum-related subsidies and higher excise taxes.

India’s experience has taught the opposite lessons than that of the advanced countries. They are as follows:

•  It has reaffirmed the need for rules to contain fiscal deficits, because of the proclivity to spend during booms and undertake stimulus during downturns.

•  It has also highlighted the danger of relying on rapid growth rather than steady and gradual fiscal and primary balance adjustment to do the “heavy lifting” on debt reduction.

•  In short, it has underscored the fundamental validity of the fiscal policy principles set out in the FRBM.

•  The operational framework designed in 2003 will need to be modified to reflect the India of today and it will be the task of the FRBM Review Committee to set out a new vision for the 21st century.

While India’s pace of growth has quickened in the past quarter century, the dynamism of advanced countries has ebbed, particularly since the Global Financial Crisis. And this has led to a fundamental divergence of fiscal perspectives.