GK Questions with Answers on Indian History and Culture that consists of 10 Multiple Type Questions that attune and equipped the aspirants according to the evolving nature of different competitive examinations like UPSC-prelims, IAS-prelims, SSC, CDS, NDA, State Services, and Railways etc.

The Indian Cultural and art history are blended by the thousands of distinct and unique features because its history is an amalgamation of several various cultures, spans across the Indian subcontinent and has been influenced and shaped by a history that is several thousand years old. Here, we are giving GK Questions with Answers Sets on Indian History and Culture and each sets consists of 10 Multiple Type Questions that attune and equipped the aspirants according to the evolving nature of different competitive examinations like UPSC-prelims, IAS-prelims, SSC, CDS, NDA, State Services, and Railways etc. 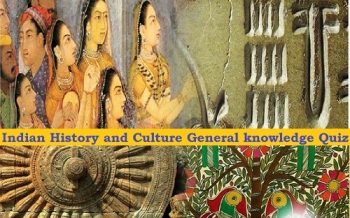 1. Consider the following statement (s) is/are not related to Mathura School of Art

I. Artisans from Mathura initially continued the Mauryan sculptural forms of the Yaksha and Yakshi, until a human image of Buddha appeared, which was independent of other schools of art, but later influenced by the Gandhara School.

II. The representations of the Buddha in Mathura, in central northern India, are generally dated slightly later than those of Gandhara.

2. Which of the following places were the centres of Mathura School of art production?

A. Sarnath and Kosambi

B. Sanchi and Kosambi

3. Which of the following is/are the correct features of Mathura School of art Sculpture?

A. The Mathura School of Art, noted for its vitality and assimilative character, was a result of the religious zeal of Brahmanism, Jainism and Buddhism.

B. Images of Vaishnava and Shaiva faiths are found at Mathura but Buddhist images are found in large numbers.

4. Which of the following statement (s) is/are related of the Gandhara School of Art?

A. Artistic manifestation of Greco-Buddhism

B. Artistic manifestation of Indo-Greek god

5. Consider the following statement (s) is/are not related to the features of Gandhara School of art.

I. The Gandharan Buddha image was inspired by Hellenistic realism, tempered by Persian, Scythian, and Parthian models.

I. It is a treatise of forest which explain the the rituals while dwelling into the philosophical discussions of the Brahmanas.

II. They record the transitions between ritualistic symbolism of Brahmanas and philosophical aspects of Upanishads.

7. Which of the following School of art noted for its vitality and assimilative character just because of Brahmanism, Jainism and Buddhism?

A. Gandhara School of Art

B. Amaravati School of Art

8. Which of the following is/are the main objective of Purva Mimansa?

A. The main objective of the Purva Mimamsa School is to interpret and establish the authority of the Vedas.

B. The main objective of the Purva Mimamsa school is to concentrates on the philosophical teachings of the Upanishads (mystic or spiritual contemplations within the Vedas), rather than the Brahmanas (instructions for ritual and sacrifice).

I. The Arthashastra, attributed to the Mauryan minister Chanakya in the 4th Century B.C., is one of the earliest Indian texts devoted to political philosophy, and it discusses ideas of statecraft and economic policy.

II. During the Indian struggle for independence in the early 20th Century, Mahatma Gandhi popularized the philosophies of ahimsa (non-violence) and satyagraha (non-violent resistance),

III. Gandhian Philosophy was influenced by the teachings of the Hindu Bhagavad Gita, as well as Jesus, Tolstoy, Thoreau and Ruskin.

Which of the above statement(s) is/are correct?

10. Which of the following is/are the correct statement(s) related to the Jain Philosophy?

A. The central tenets of Jain philosophy were established by Mahavira in the 6th Century B.C., although Jainism as a religion is much older.

B. A basic principle is anekantavada, the idea that reality is perceived differently from different points of view, and that no single point of view is completely true (similar to the Western philosophical doctrine of Subjectivism).