In this article, we are providing a quiz on Seating Arrangement (Circular and Linear) topic under the Reasoning section.  Candidates are advised to solve the quiz and strengthen their preparation.

In bank exam, problems on seating arrangement topic are often asked in the Logical Reasoning Section. Here the banking team of jagran josh are providing quiz on seating arrangement questions.  Candidates who are appearing in IBPS clerk Mains examination must solve the below puzzle to sharpen and strengthen their preparation.

Directions (1-5): Study the following information carefully and answer the given questions:

Eight persons, viz M1, M2, M3, M4, M5, M6, M7 and M8 are sitting around a circular table facing the centre. Each of them likes different games, viz Football , Badminton , Cricket , Basketball , Volleyball , Chess , Golf and Hockey , not necessarily in the same order. M1, who likes Hockey, sits third to the left of M5. The one who likes Golf sits on the immediate right of M1. M4, who likes Badminton, sits second to the right of M2. M2 is not on immediate neighbour of M5. M3, who likes Cricket, sits exactly in the middle of the persons who likes are Volleyball and Golf. M7, who likes Science, sits second to the left of M8, who likes History.

1. Which of the following pair represent the immediate neighbours of the person whose hobby is Badminton?

2. How many people sit between M1 and the person who likes Basketball when counted clockwise?

a) Third to the left

b) Fourth to the right

c) Fifth to the left

d) Second to the right

e) Second to the left

5. Who sits on the immediate left of the M6? 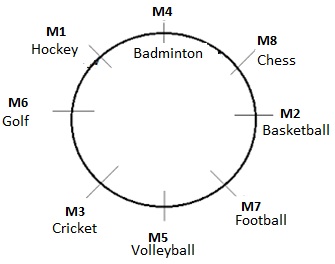 Directions (6-10): Study the following information carefully and answer the questions given below:

G1, G2, G3, G4, G5, G6, G7 and G8 are sitting in a straight line but not necessarily in the same order. Some of them are facing south while the remaining is facing north.

a) Second to the right

b) Third to the right

d) Fourth to the left

e)  None of the above

8. Who among the following sits at the extreme left end of the line?

9. What is the position of G8 with respect to that person who is second to the left of G3?

b) Second to the right

d) Third to the left

10.  Which of the following statements is true?

b) G8 sits on the immediate right of G7.