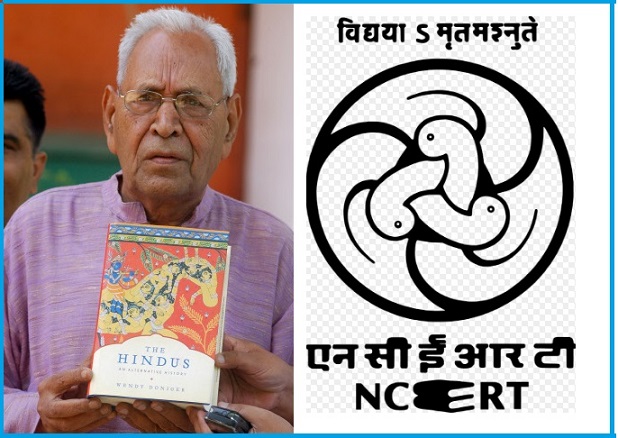 RSS-affiliated Shiksha Sanskriti Utthan Nyas, headed by Dina Nath Batra, has sent the NCERT a five-page list of recommendations on how to make NCERT textbooks less “biased” & more “inspiring”, according to an Indian Express report.

What Din Nath Batra wants to be removed from NCERT textbooks?

• A Class 9 book has a poem by Ramdhari Singh Dinkar that follows a question on the “yearnings of a lover”. Such questions “misguide children and cause the loss of their character,” the Nyas has written.

• A Class 11 book contains extracts from M F Husain autobiography. The Nyas wants it removed because the “central government considered his activities a threat to the country’s unity and sovereignty”.

• A chapter on the Kannada Bhakti poet Akka Mahadevi describes an incident in which she took off her clothes in protest. This “description of naked women” is an “attack on Hindu culture in the name of women freedom,” says the Nyas.

• Paragraph on 1984 riots that ends, “During his parliament speech in 2005, Prime Minister Manmohan Singh expressed regret over the bloodshed and sought an apology from the country for anti-Sikh violence.”

• A paragraph saying the Ram temple movement was “linked with the growth of BJP and politics of Hindutva”.

• A paragraph that describes the BJP as a “Hinduvadi party”; another that says “Hindutva or Hindupan were coined by VD Savarkar”.

• The sentence, “Babri mosque was built by Mir Baqi… Some Hindus believe that it was built at the birthplace of Ram by destroying a Ram temple.”

• A description of the Godhra incident of 2002 says: “A train caught fire… on a suspicion that the fire was caused by Muslims.” The Nyas wants “caught fire” to be replaced by “set on fire”, and the word “suspicion” removed.

• A box that says “Can we ensure that those who plan such massacres… they can be at least taught a lesson in a political manner (voting)”.

• Class 6: During the post-Vedic period, “women were normally considered equivalent to Shudras”.

• Class 7: Akbar introduced “Sulah-e-Kul policy”, which stated that “the followers of all religions have an equal place… (before) God’s grace.”

• Class 8: An extract from the 19th century activist Tarabai Shinde’s milestone book A Comparison Between Women and Men, which attacks patriarchy and is considered the first feminist text in modern India. The extract details the “misfortune” and “social boycott” a widow suffers.

• Class 12: A chapter on the varna system says, “In this system the status was probably determined by birth. They (Brahmins) tried to make people realise that their prestige was based on birth… such parameters were often strengthened by stories in many books like The Mahabharata.”

• A chapter terms “Indra, the war god of Aryas” as the “accused” of “massacre of men, women and children” during the last phase of Mohenjo Daro.

• A chapter on the Mughal period says that “the rulers had an extremely liberal policy towards people… All Mughal rulers gave grants for the construction and maintenance of places of worship. Even when the temples were destroyed during battles, grants for their repair work were released later.”

• In his “memoirs”, Jahangir mentioned a “chain of justice” he got erected to ensure justice. This “30-yard chain had 60 bells”, and anybody could ring it and “attract attention” of the authorities.

Why Dina Nath Batra wants this content to be removed from NCERT textbooks?

Atul Kothari, secretary of the Nyas, told The Indian Express that several things in these books are “baseless” and “biased.” “There is an attempt to insult members of a community. There is also an appeasement… how can you inspire children by teaching them about riots? The history of valour, of great personalities like Shivaji, Maharana Pratap, Vivekananda and Subhas Chandra Bose find no place,” he told the paper. The Nyas had earlier demanded that AK Ramanujan’s essay Three Hundred Ramayanas: Five Examples and Three Thoughts on Translation be removed from from Delhi University’s undergraduate syllabus and that Wendy Doniger’s The Hindus. Three Hundred Ramayana be withdrawn.