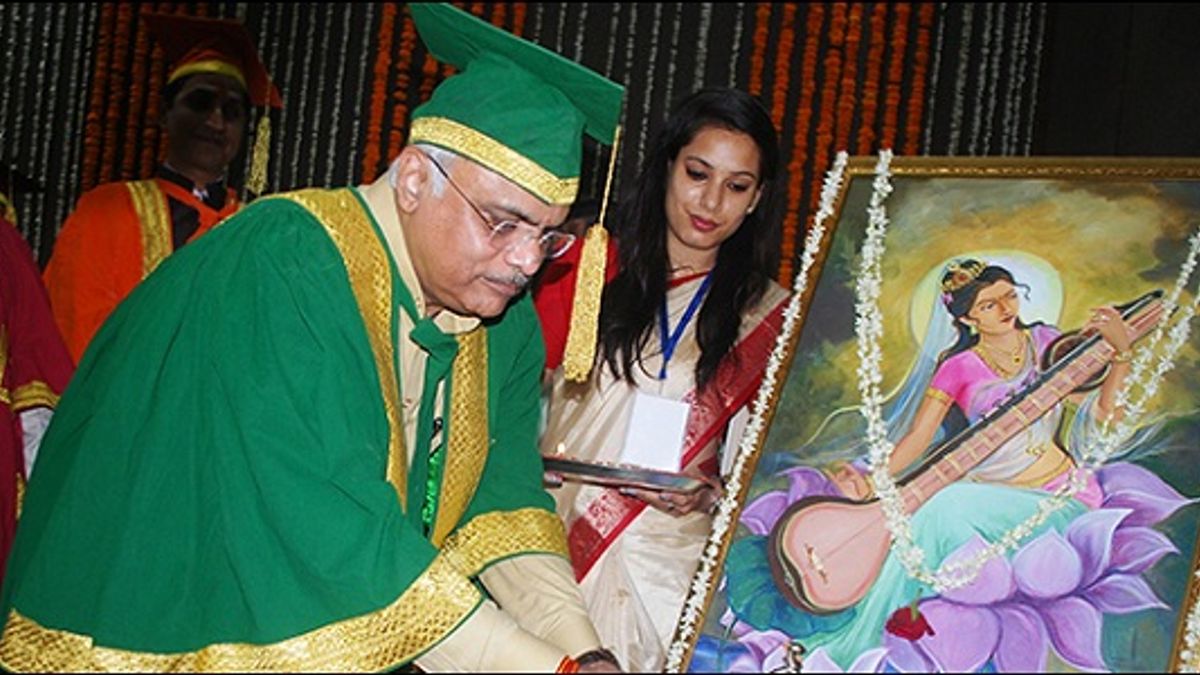 Mangalayatan University hosted its 7th Convocation function recently at the varsity’s Aligarh Campus. Rajya Sabha member and President of the Indian Council for Cultural Relations (ICCR), Dr. Vinay Sahasrabuddhe Rajya Sabha, graced the 7th Convocation meet of Mangalayatan University as the chief guest. In his address to the students, Dr Sahasrabuddhe highlighted the challenges that lie ahead in the domain of higher education. He said that many educational institutions have made higher education a means of livelihood or business without actually trying to understand the depth of the subject. At the same time, he also discussed the opportunities that lie before private universities like Mangalayatan University and how these private players can script a successful future for the students ahead.

In his address, Political thinker and analyst, Dr Sahasrabuddhe said that private universities had a major role to play in the process of transformation of higher education in the country. Private Universities are not tied to the strict government policies and norms and therefore are free to improve the quality of higher education being imparted by them through extensive efforts. Private Universities like Mangalayatan University need to focus on academic programmes that have their primary emphasis upon experimentation and research. This will help students imbibe the necessary skills and help them enhance their employability quotient.

Addressing the students who received their degree certificates in the Convocation function, he said that the domain of education has undergone massive transformation in the last five years and they have reaped the benefits of this transformation. Now, the onus falls upon them to expand the horizon and contemplate over the future of higher education in the country. He also advised students to introspect their life to understand its true meaning. He said, it will give character and strength to their personality.

Following the keynote address, Prof. Achyutanand Mishra, delivered the presidential address in which he termed the India of 21st Century as ‘Transforming India’. He said that India is witnessing rapid development technology which in turns marks evolution of new-age domains such as engineering. He said that the current period will be marked as the 4th Industrial Revolution in the history of the world and will turn out to be a new chapter for India. He said education, especially higher education will put an end to social problems like poverty and make India a self-reliant country which is capable of meeting its energy needs.

He said that the energy and enthusiasm of the youth of the country, including the students who received their degrees at the convocation function, will prove to be an effective foundation for the ‘New India’. He inspired students to dream big and take risks in their life to achieve them. This will help them achieve success in the long run.

In his address to the students, poet Dr. Kumar Vishwas said that it is ironic that western cultures are looking for life on Mars i.e. Mangal par Jeevan while Indian culture promotes the philosophy of Happiness in Life i.e. ‘MangalmayJeevan’Dr Kumar Vishwas was awarded an honorary D.Litt title at the convocation function.

Dubai Care Chief Executive Officer, Tariq Al Gurg also addressed the function and said that Dubai Care is involved in providing quality education to over 90 lakh children in over 57 countries. He shared that he and his organization has learnt a lot from the Indian education system and how private agencies were trying rewrite the fate of the country by making key changes to India’s higher education system. He was also awarded an honorary D.Litt title at the convocation function.

Following this, Mangalayatan University Chancellor, KVSM Krishna presented the annual report before the audience. The report highlighted university’s achievement in the last few years. Addressing the event, he said that the varsity was working very hard to provide employment oriented education to the youth. From next academic year onwards, Mangalayatan University will also launch several new employment oriented programmes including Media, Fine Arts, Animation and Graphics, Design and Digital Arts domains.
On similar lines, the Department of Media and Journalism has launched several short-term certificate programmes in Film-making, RJ-ing, Anchoring, Direction, Content Writing, Advertising and PR management. In addition to this, the university has also launched several cross-functional and cross-domain based programmes like Agriculture School of Pharmacy etc.

At the convocation function, a total of 742 students received their degrees from Mangalayatan University. In addition to this, around 35 students were awarded gold medals while 42 students received silver medal during the convocation function. Three students were also awarded their PhD degrees during the function. The degrees were awarded to the students by the senior management including Dean and Principal Prof. Arif Suhel, Prof. Vikas Kaushik, Prof. Jayanti Lal Jaina Prof. Shivaji Sarkar, Dr. Lal Ratnakar.

Disclaimer: The information provided in this Notification is solely by Mangalayatan University, Jagranjosh.com bears no representations or warranties of any kind, express or implied, about the completeness, accuracy, reliability, suitability or availability with respect to the information. Individuals are therefore suggested to check the authenticity of the information.