In this article you will get CBSE Class 10 Science chapter 5, Periodic Classification of Elements: NCERT Exemplar Problems and Solutions (Part-II). Every question has been provided with a detailed explanation. All the questions given in this article are very important to prepare for CBSE Class 10 Board Exam 2017-2018. 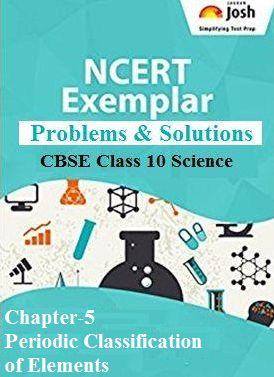 Find below the NCERT Exemplar problems and their solutions for Class 10 Science Chapter, Periodic Classification of Elements:

Question. 27 The three elements A, B and C with similar properties have atomic masses X, Y and Z respectively. The mass of Y is approximately equal to the average mass of X and Z. What is such an arrangement of element called as? Give one example of such a set of elements.

Question. 28 Elements have been arranged in the following sequence on the basis of their increasing atomic masses.

(a) Pick two sets of elements which have similar properties.

(b) The given sequence represents which law of classification of elements?

Therefore, Set I is F and Cl

(b) In the given sequence, elements are arranged in increasing order of their atomic masses and each 8th element shows similar properties. So, it represents the Newlands' law of octaves.

Question. 29 Can the following groups of elements be classified as Dobereiner's triad?

For a group to be Dobereiner's triad, the atomic mass of middle element must be average of atomic masses of  the first and the third elements. 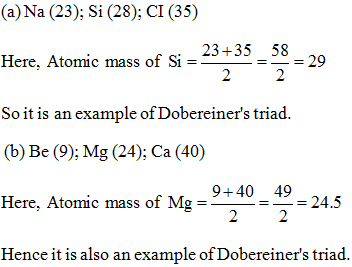 Question. 30 In Mendeleev's periodic table, the elements were arranged in the increasing order of their atomic masses. However, cobalt with atomic mass of 58.93 amu was placed before nickel having an atomic mass of 58.71 amu. Give reason for the same.

In Mendeleev's periodic table, the reasons for placing cobalt (Co) before nickel (Ni) though its atomic mass is higher than that of nickel, are:

(i) Cobalt was placed in the group of rhodium (Rh) and iridium (Ir) because it exhibits the properties similar to them.

(ii) Similarly Nickel was placed with elements like palladium (Pd) and platinum (Pt) having properties similar to it.

The position of hydrogen is unique in Modern Periodic table. This is because:

(ii) Both hydrogen and halogens require one electron to complete their valence configuration therefore they show similarities in their properties and hydrogen can be placed in group 17.

Question. 32 Write the formulae of chlorides of Eka-silicon and Eka-aluminium, the elements predicted by Mendeleev.

Answer.
Eka-silicon is identified as germanium (Ge) which is placed in group 4 of Mendeleev's periodic table. The valency of germanium is 4 so the chemical formula for chloride must be GeCl4.

Eka-aluminium was later identified as gallium (Ga). It is placed in group 3 of the Mendeleev's periodic table. Hence the valence of gallium is 3 and the formula of chloride would be GaCl3.

Question. 33 Three elements A, B and C have 3, 4 and 2 electrons respectively in their outermost shell. Give the group number to which they belong in the modern periodic table. Also, give their valencies.

The group number for elements can be identified as 10 + number of valence electrons. Element A with 3 valence electrons must show valency as 3 and should belongs to group 13. The elements of group 13 are B, Al, Ga, In or Tl.

Question. 34 If an element X is placed in group 14, what will be the formula and the nature of bonding of its chloride?

Elements of group 14 have 4 valence electrons and valency would be 4. Group 14 contains metals and non-metals with metalloids.

As there are four valence electrons so it must involve in covalent bonding to complete its octet configuration. So the chemical formula of chloride of element X would be XCI4.

Since chloride is formed by sharing of electrons therefore the nature of the chloride of element X will be covalent.

Question. 35 Compare the radii of two species X and Y. Give reasons for your answer.

Here X has same number of electrons and protons, therefore it is a neutral atom whereas  Y contains 12 protons and 10 electrons so there are 2 protons extra giving Y a charge of +2. The electronic configurations of the two species can be expressed as:

The atomic size of a cation is always smaller than a neutral atom containing same number of protons this is because cation has less number of electrons due to which the nuclear  attractions are more on electrons in cation causing its size to be smaller than that of the neutral atom.

Hence, atomic radius of Y is smaller than that of X.

Question. 36 Arrange the following elements in increasing order of their atomic radii

Question. 37 Identify and name the metals out of the following elements whose electronic configurations are given below.

Therefore, from given electronic configurations, metals are:

The electronic configuration of element A with atomic number 19 would be 2, 8, 8, 1. Hence it is potassium. Since, it has omly one valence electron therefore it must be a metal.

The electronic configuration of element B would be 2, 8, 7 with number of valence electrons being7. So, it must be a non-metal that is chlorine.

A metal and a non-metal usually combine through ionic bond because metals have tendency to lose electrons and form cations whereas non-metals can accept electrons to form anions.

The electron dot structure of KCl is as given below

The arrangement of given elements in the Modern Periodic table is listed below.

Question. 40 Identify, the elements with the following property and arrange them in increasing order of their reactivity.

(a) An element which is a soft and reactive metal.

(b) The metal which is an important constituent of limestone.

(c) The metal which exists in liquid state at room temperature.

(a) Alkali metals like sodium and potassium are soft and reactive.

(b) The chemical formula of limestone is CaCO3 hence the important constituent of limestone would be calcium (Ca).

(c) Mercury is the only metal which exists in liquid state at room temperature.

Since reactivity of metals decreases from left to right in the group therefore the order of reactivity of Na, Ca and Hg would be;

Question. 41 Properties of the elements are given below. Where would you locate following elements in the periodic table?

(a) A soft metal stored under kerosene.

(b) An element with variable (more than one) valency stored under water.

(c) An element which is tetravalent and forms the basis of organic chemistry.

(d) An element which is an inert gas with atomic number 2.

(e) An element whose thin oxide layer is used to make other elements corrosion resistant by the process of "anodising".

(a)    Because of high reactivity of alkali metals, they are usually kept under kerosene. Alkali metals are placed in group 1 and starts from period 2 to 7.

(b)   The element with variable valency and must be stored in water is phosphorus. It shows variable valency of 3 and 5 and is reactive towards air and not water. It is placed in group 15 and period 3 of periodic table.

(c)    Carbon forms the basis of organic compounds. It exhibits tetra-valency because it has 4 valance electrons. It is placed in group 14 and period 2 of Periodic table.

(d)   Helium is the lightest inert gas with atomic number 2. It is placed in  group 18 and  period 1 of periodic table.

(e)    Aluminium metal is used to make other elements corrosion resistant by the process of "anodising". The oxide layer is of Al2O3. The atomic number of aluminum is 13 and it is placed in  group 13 and  period 3 of periodic table.