NCERT textbooks and NCERT solutions are very important resources for the preparation CBSE board exams as well as competitive exams like NEET. In this article, we have provided the NCERT solutions for Class 12 Biology textbook, chapter 11 - Biotechnology: Principle and Processes. These solutions are also available for download in PDF format here.

Find NCERT Solutions for Class 12 Biology – Chapter 11, Biotechnology: Principle and Processes. There are 12 questions in this chapter of the NCERT textbook. In this article, you will find solutions to all the questions of this chapter. You can also download these solutions in PDF format. NCERT textbook and NCERT Solutions are important for CBSE Class 12 board exams as well as medical entrance exams.

Question1. Can you list 10 recombinant proteins which are used in medical practice? Find out where they are used as therapeutics (use the internet).

Question2. Make a chart (with diagrammatic representation) showing a restriction enzyme, the substrate DNA on which it acts, the site at which it cuts DNA and the product it produces. 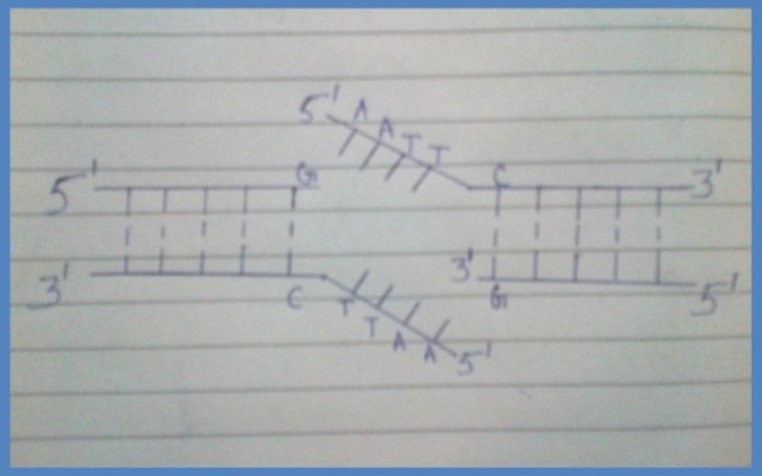 Question3. From what you have learnt, can you tell whether enzymes are bigger or DNA is bigger in molecular size? How did you know?

Proteins are made from amino acids which is joined through peptide bonds.

In nature 20 different kinds of amino acids are found. Avg. Protein length is around 300residues of amino acids. Some of like actin are made up of thousand actin molecules. DNA is made up of polymers of nucleotides.

DNA polymers can be enormous molecules containing million of nucleotides. Like human chromosome is made up of 220 millions base pairs. So, DNA is bigger in molecular size.

Question4. What would be the molar concentration of human DNA in a human cell? Consult your teacher.

The molar concentration of human DNA in a human diploid cell will be approximately:

No: of human chromosome in human cell = 46

Question5. Do eukaryotic cells have restriction endonucleases? Justify your answer.

Eukaryotic cells do not have restriction nuclease. Restriction enzymes restrict the infection of bacteria by some viruses like bacterio phages by degrading the viral DNA without affecting viral DNA.

Question6. Besides better aeration and mixing properties, what other advantages do stirred tank bioreactors have over shake flasks?

Palindromic DNA sequences are a group of letters that form the same word when read from both forward and backward.

Question8. Can you recall meiosis and indicate at what stage a recombinant DNA is made?

The linkage of antibiotic resistance gene with the plasmid vector with the plasmid with the enzyme DNA ligase, which acts on cut DNA molecules and joins their ends. This makes a new combination of circular autonomously replicating DNA created in vitro and this is known as recombinant DNA.

Question9. Can you think and answer how a reporter enzyme can be used to monitor transformation of host cells by foreign DNA in addition to a selectable marker?

There are many methods of introducing the ligated DNA into recipient cells, after making them “component” to receive and take up DNA present in its surrounding. So if a recombinant DNA bearing gene for resistance to an antibiotic is transferred into E.coli cells, the host cells become transformed into ampicillin resistant cells. Since due to ampicillin resistance gene,one is able to select a transformed call in the presence of ampicillin.

When we insert a piece of alien DNA into a cloning vector and transfer it into a bacterial, plant or animal cell, the alien DNA gets multiplied. The whole process involves the use of restriction endonucleases, DNA ligase, appropriate plasmid or viral factors to isolate and ferry the foreign DNA into host organisms.

(a) Origin of replication

(c) Downstream processing: After the biosynthetic stage, the products are subjected through a series of processes, such as separation and purification, before it is ready for marketing as a finished product.

These processes are referred to as downstream processing.

(b) Restriction enzymes and DNA

(a) PCR: PCR means polymerase chain reaction. In this reaction multiple copies of gene of interest is synthesised in vitro using two sets of primers and the enzyme DNA polymerase. The enzyme extends the primers using the nucleotides provided in the reactuion and the genome DNA as template. The segment of DNA can be amplified to approximately billion ties if the process of replication of DNA is repeated many times.

When restriction enzymes make a cut in DNA strand, it will leave a single stranded portion at ends. These are overhanging called sticky ends. Sticky ends can make H-bonds with their complementary cut counterparts by DNA ligase.

(c) Chitinase: It is a type of enzyme which is treated with animal or plant tissue to break the cell open to release DNA along with other macromolecules such as RNA, proteins etc.

Question12. Discuss with your teacher and find out how to distinguish between

(a) Plasmid DNA and Chromosomal DNA

(a) Plasmid DNA and Chromosomal DNA