Get here the best updated NCERT solutions for the class 10 Social Science History Chapter 2 - Nationalism in India. All the solutions are provided here for free download. 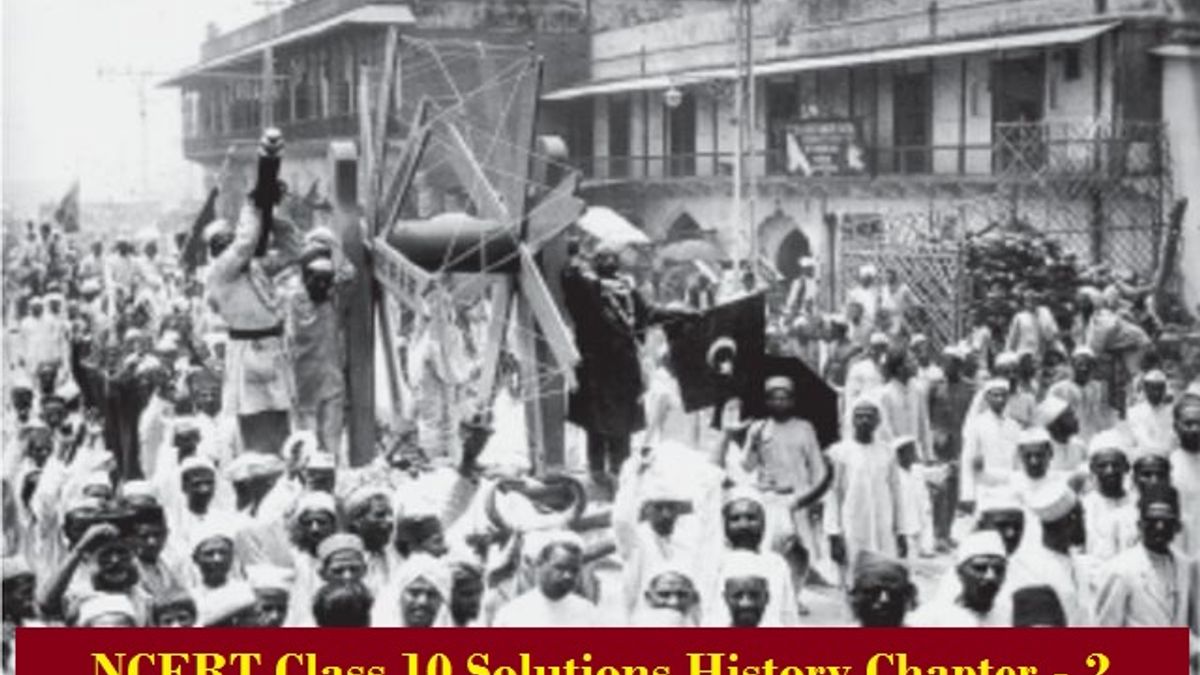 Read here the exclusive and accurate NCERT solutions for 10 Social Science History Chapter 2 - Nationalism in India. All the answers are structured in a way to help you easily learn them. Answers have been created in accordance with the CBSE marking scheme and appropriate word-limit. Students may read or download the solutions as per their convenience and use the same to make effective preparations for their internal school examinations and the annual board examinations.

(a) Why growth of nationalism in the colonies is linked to an anti-colonial movement.

(b) How the First World War helped in the growth of the National Movement in India.

(c) Why Indians were outraged by the Rowlatt Act.

(d) Why Gandhiji decided to withdraw the Non-Cooperation Movement.

(a) Growth of nationalism in the colonies is linked to an anti-colonial movement because:

(b) The First World War helped in the growth of the National Movement in India in the following ways:

(c) Indians were outraged by the Rowlatt Act due to the following reasons:

(d) Gandhiji decided to withdraw the Non-Cooperation Movement due to the following reasons:

Question 2. What is meant by the idea of satyagraha?

Answer: The idea of satyagraha implies a unique method of mass agitation that emphasises the power of truth and the need to search the truth. It supports the belief that if the cause is true and the struggle is against injustice, then there is no need for physical force to fight the oppressor. In this, people-including the oppressors have to be persuaded to see the truth instead of being forced to accept truth through the use of violence. By this struggle, truth was bound to be victorious.

Question 3. Write a newspaper report on:

(a) The Jallianwala Bagh massacre

(b) The Simon Commission

(a) The Jallianwala Bagh massacre- On 13th April, 1919, a public meeting was announced, at Jallianwala Bagh, Amritsar to protest against the Rowlatt Act. The people were allowed to assemble there. Thousands of people gathered in the Jallianwala Bagh. Suddenly, General Dyer marched there with armoured troops. They blocked the exit points from the Bagh and opened fire upon the innocent citizens. Hundreds of innocent people including women and children were killed on this day. Dyer’s purpose in doing so was to ‘produce a moral effect’ and terrorise the Satyagrahis. This massacre of innocent people in thousands led to large scale strikes, clashes with police and attacks on government buildings by the enraged Indian people.

(b) The Simon Commission was appointed in India in 1928. This commission consisted of seven members and its Chairman was Sir John Simon. The objective of the Commission was to look into the functioning of the constitutional system in India and suggest some constitutional changes. But nationalists in India opposed the Commission because it had no Indian member. The Congress and the Muslim League jointly demonstrated against it. When the Simon Commission arrived in India, it was greeted with the slogan “Go Back Simon”.

Question 4: Compare the images of Bharat Mata in this chapter with the image of Germania in Chapter 1.

Answer: Comparison of the images of Bharat Mata with the image of Germania:

Question 1. List all the different social groups which joined the Non-Cooperation Movement of 1921. Then choose any three and write about their hopes and struggles to show why they joined the movement.

Answer: The different social groups that joined the Non-Cooperation Movement of 1921 were the urban middle class comprising lawyers, teachers and headmasters, students, peasants, tribals and workers.

Question 2. Discuss the Salt March to make clear why it was an effective symbol of resistance against colonialism.

Answer: The Salt March was an effective symbol of resistance against colonialism because:

Question 3. Imagine you are a woman participating in the Civil Disobedience Movement. Explain what the experience meant to your life.

Answer: A large number of women participated in large the Civil Disobedience Movement which was called by Gandhiji. They participated in protest marches, manufactured salt, and picked foreign cloth and liquor shops. Many of them were put to jail by the police. Women at that time saw national service as a sacred duty.

Question 4. Why did political leaders differ sharply over the question of separate electorates?

Answer: Political leaders differed sharply over the question of separate electorates because of differences in their opinion.

All these NCERT solutions can also be downloaded in PDF from the following link: