Get here free NCERT solutions for Class 10 Social Science History Chapter 5 - Print Culture and the Modern World. Find here the best solutions for 2020-2021. Link to download all the solutions is also provided here. 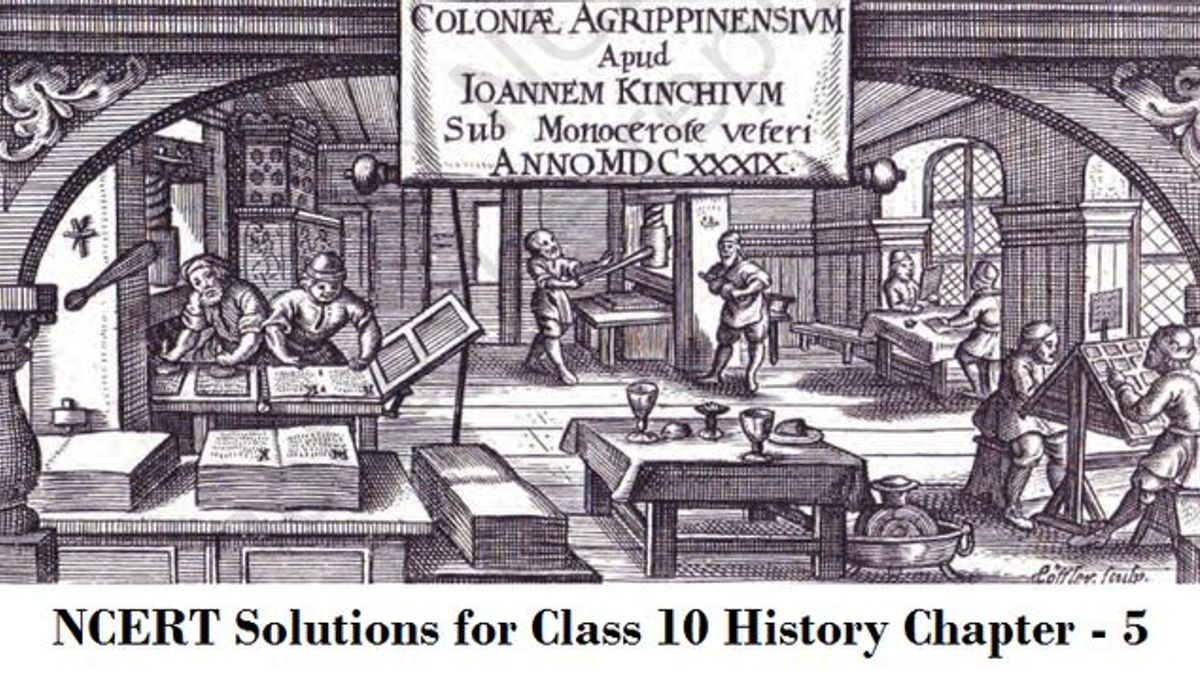 1. Give reasons for the following:

(a) Woodblock print only came to Europe after 1295.
(b) Martin Luther was in favour of print and spoke out in praise of it.
(c) The Roman Catholic Church began keeping an Index of Prohibited books from the mid-sixteenth century.
(d) Gandhi said the fight for Swaraj is a fight for liberty of speech, liberty of the press, and freedom of association.

(a) Woodblock print was invented in China around the sixth century. It came to Europe in 1295 when Marco Polo, an Italian explorer, returned to Italy after many years of exploration in China. He brought with him the technology of woodblock printing.

(b)  Martin Luther was a great religious reformer of Germany. In 1517, he wrote 95 theses that criticised the corrupt practices of the Roman Catholic Church. Very soon, thousands of copies of Luther’s writings were printed and read widely. He was deeply moved by realising the power of printing and was grateful to it. He considered print as the ultimate gift of God. This led to the beginning of the reformation movement. This is the reason why Luther was in favour of print and spoke out in praise of it.

(c) Print and popular literature encouraged many distinctive interpretations of religious faiths. Manocchio, a miller in Italy, began to read the books that were available in his locality. He gave a new interpretation of the Bible and formulated a view of God. Due to this, the Roman Catholic Church had to face many dissents from mid-16th century onwards. Therefore, the church banned such books and decided to maintain an Index of the prohibited books.

(d) According to Mahatma Gandhi, the liberty of speech, liberty of press and freedom of association were three most powerful weapons of expressing and cultivating public opinion. No nation can survive without these three prerequisites. If a country wants to get freedom from foreign domination then these three liberties are very important.

2. Write short notes to show what you know about:
(a) The Gutenberg Press
(b) Erasmus's idea of the printed book
(c) The Vernacular Press Act

(a) The Gutenberg Press: It was the first printing press that was developed by Johan Gutenberg. He spent his childhood in a large agricultural estate and had good experience in operating olive and wine presses. By 1448, he developed a modified version of olive and wine presses. With this new printing press, the first book he printed was Bible. This press had a long handle attached to the screw. The screw was turned with help of the handle which in turn pressed down the platen over the printing block that was placed on the top of a sheet of damp paper. The lead moulds were used for casting the metal types for the letters of alphabet.

(b) Erasmus’s idea of printed book: Erasmus was the Latin scholar and a Catholic reformer. He criticized the printing of books because he was afraid that this would lead to the circulation of books that were full of rebellious ideas. He thought that majority of the books were irrelevant and illogical which would only spread the scandalous and irreligious ideas. According to him, with such books coming in large numbers, the significance of valuable literature would be lost.

(c) The Vernacular Press Act: This act was passed in 1878 by the British government in India. This act gave the government with tyrannical rights to censor reports and editorials in the Vernacular Press.  If a Vernacular Paper published any seditious report and the newspaper ignored the initial warning, then the press was seized and the printing machinery confiscated.

3. What did the spread of print culture in nineteenth century India mean to:
(a) Women
(b) The poor
(c) Reformers

(a) Women: With the spread of print culture in nineteenth century India, the Indian women became as important as readers and writers. This increased the literacy among women. Many journals started emphasizing the importance of women’s education. Many books and magazines were especially published in the interest of women. Some literate women started writing books and their autobiographies. From the 1860s, many Bengali women writers like Kailashbashini Debi wrote books that highlighted the miserable condition of majority of women in India where they were imprisoned at home, kept in ignorance, forced to do hard domestic labour and treated unjustly by the males they served. Thus, the print culture gave women some amount of freedom to read and develop their own views on various issues related to women.

(b) The poor people: In the 19th century, many publishers started producing cheap books which weres were sold at crossroads. This increased the readership among the poor people. Public libraries were also set up which increased the access to the books. Now, everyone was able to gain knowledge. Encouraged and inspired by the social reformers, the people like factory workers also started setting up their libraries. Some of them also wrote books highlighting the issue of class distinction. In 1938, Kashibaba, a Kanpur mill worker wrote and published ‘Chote aur Bade Ka Sawal’ to depict the links between caste and class exploitation.

(c) Reformers: Indian reformers used newspapers, journals and books to highlight the unethical issues and the social evils prevailing in the society.

1. Why did some people in 18th century Europe think that print culture would bring enlightenment and end despotism?

Answer: Many people in the 18th century Europe thought that the print culture would bring enlightenment and end despotism because of the following reasons:

2. Why did some people fear the effect of easily available printed books? Choose one example from Europe and one from India.

Answer: Some people especially from upper class and powerful class feared the effect of easily available printed books as:

Examples from Europe and India are:

(i) In Europe, the Roman Catholic Church tried to curb the printed books through the Index of Prohibited Books.

3. What were the effects of the spread of print culture for poor people in nineteenth century India?

Answer: The effects of the spread of print culture for poor people in nineteenth century India were:

4. Explain how print culture assisted the growth of nationalism in India.

Answer: The print culture assisted the growth of nationalism in India in the following ways:

All these NCERT solutions can also be downloaded in PDF from the following link:

NCERT Solutions for Class 10 History India and the Contemporary World-II: All Chapters