NCERT Solutions for Class 8 Social Science History Chapter 5: When People Rebel - 1857 and After

NCERT Solutions for Class 8 History Chapter 5 - When People Rebel are provided here in PDF format. Check the easy and accurate answers for scoring high in your exams. 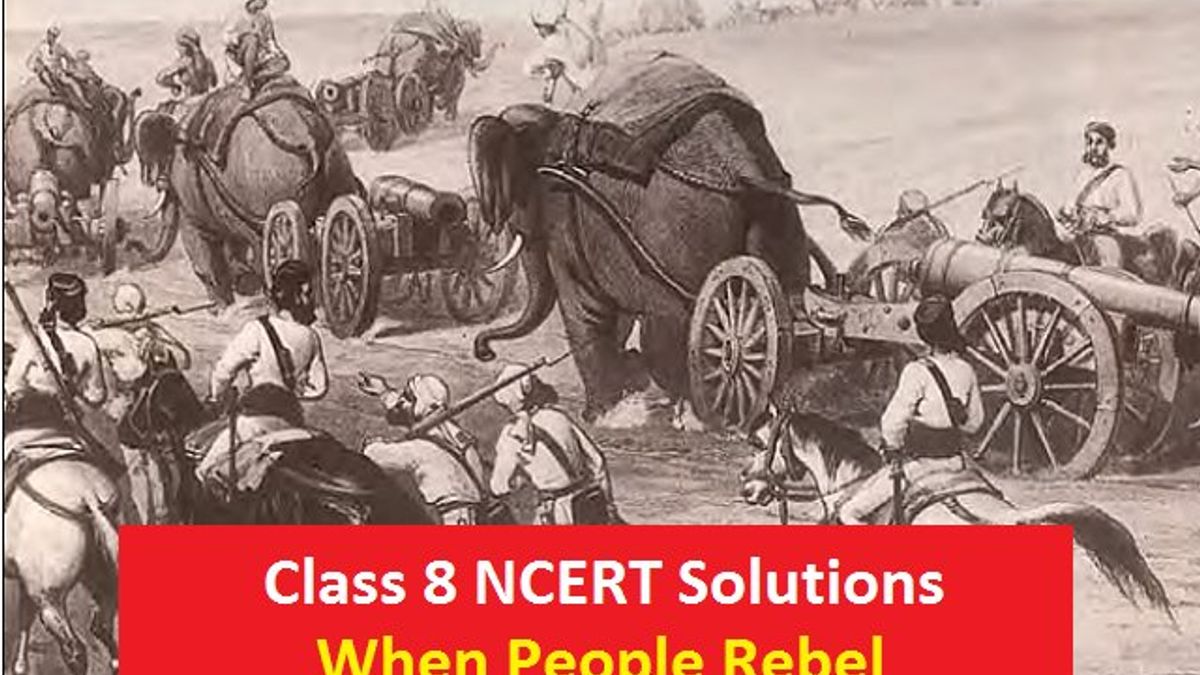 NCERT Solutions for Class 8 Social Science History Chapter 5 - When People Rebel  will help you in quick and effective learning thereby helping you perform well in your Social Science exam. We have provided here the thorough answers to all the questions given in chapter 5 of the latest NCERT History Book of Class 8. All the answers have been kept simple so that you can easily understand and memorise them.  All the answers are provided here in a readable and downloadable format.

1. What was the demand of Rani Lakshmibai of Jhansi that was refused by the British?

Rani Lakshmibai wanted her adopted son to be the ruler of Jhansi after the death of her husband. But the British refused her plea.

2. What did the British do to protect the interests of those who converted to Christianity?

In 1850, the British passed a new law to make conversion to Christianity easier. This law allowed an Indian who had converted to Christianity to inherit the property of his ancestors.

3. What objections did the sepoys have to the new cartridges that they were asked to use?

The new cartridges that the sepoys were asked to use were reported to be greased with the fat of cows and pigs. They had to bite the cartridges to load them into the rifles. But this was completely against their. Hence, they denied using the new cartridges.

4. How did the last Mughal emperor live the last years of his life?

Bahadur Shah Zafar was the last Mughal emperor. He lived a very pathetic life during the last years of his life. The sepoys proclaimed him as their leader in their fight against the British. He was the symbolic head of the 1857 revolt. However, after the failure of the revolt, he was tried in the court and was sentenced to life imprisonment. His sons and grandson were shot dead by the British. He and his wife were sent to prison in Rangoon where he died in 1862.

5. What could be the reasons for the confidence of the British rulers about their position in India before May 1857?

Before May 1857, the British were confident about their position in India because of the following reasons:

Thus the British being the only dominant authority in the Indian subcontinent gained them the confidence about their position in India before May 1857.

6. What impact did Bahadur Shah Zafar’s support to the rebellion have on the people and the ruling families?

Though, after the death of Aurangzeb, the empire began to disintegrate, Mughal rulers still had their influence over small chiefs and rulers across the country. Threatened by the expansion of British rule, the kings and the nawabs felt that they could rule again only under the Mughal authority. The revolt of 1857 started only when Bahadur Shah Zafar, the last ruler of Mughals, gave his permission. He wrote letters to the various chiefs and rulers of the country to come forward and organise a confederacy of Indian states to fight the British. This single step taken by Bahadur Shah had great implications. His support to the rebellion boosted the morale of the people and the ruling families. Many small, large kingdoms, rulers and chieftains supported the revolt after the Mughal emperor extended his support to the revolt. Sepoys revolted in Delhi, Awadh and Kanpur. The people also participated in the revolt. Hence, Bahadur Shah Zafar’s support for the rebellion had a widespread effect on the people and the ruling families.

7. How did the British succeed in securing the submission of the rebel landowners of Awadh?

The British succeeded in securing the submission of rebel landowners of Awadh through the following measures:

8. In what ways did the British change their policies as a result of the rebellion of 1857?

As a result of the rebellion of 1857, the British changed their policies in the following ways:

Download all the NCERT Solutions for Class 8 History Chapter 5 from the following link: