NCERT Solutions for Class 8 Civics Chapter 5 - Judiciary are provided here for free PDF download. You will get here the simplest answers which are easy to understand. 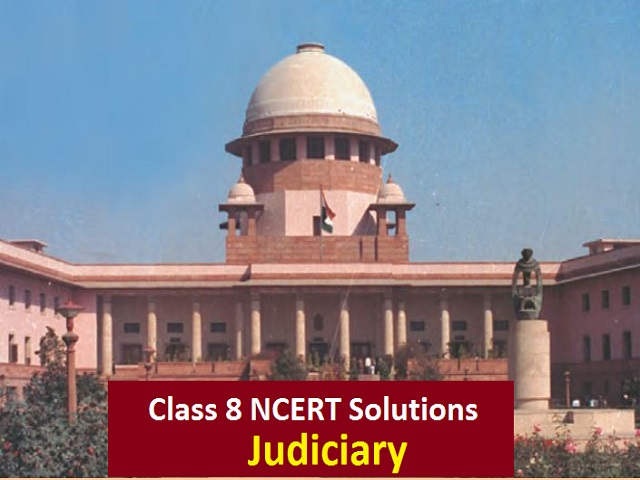 NCERT Solutions for Class 8 Social Science Civics Chapter 5 - Judiciary are quite helpful for understandind the concepts discussed in the chapter. We have provided here accurate and comprehensive answers to all the questions given in the exercises of chapter 5 of the latest NCERT Civics Book of Class 8. These answers will help you in easy and active learning of the concepts thereby helping you perform well in this subject. Download all the questions and answers in PDF format.

1. You read that one of the main functions of the judiciary is ‘upholding the law and Enforcing Fundamental Rights’. Why do you think an independent judiciary is necessary to carry out this important function?

An independent judiciary is necessary to carry out the function of ‘upholding the law and enforcing Fundamental Rights’ because it plays a crucial role in the functioning of India’s democracy. It helps to shield the judicial process from external influences. This ensures that the judiciary is independent of pressure from the legislature and the executive. It is the independence of the judiciary that allows the courts to play a central role in ensuring that there is no misuse of power by the legislature and the executive. It also plays a crucial role in protecting the Fundamental Rights of citizens because anyone can approach the courts if they believe that their rights have been violated.

2. Re-read the list of Fundamental Rights provided in Chapter 1. How do you think the Right to Constitutional Remedies connects to the idea of judicial review?

The Right to Constitutional Remedies connects to the idea of judicial review in its capacity of protecting the rights of the citizens against the working of the State legislature or executive. It allows citizens to move the court if they feel that their fundamental rights are being violated by the State administration. In the Constitution, every citizen has equal rights and none can be discriminated against. Hence, judicial review and the Right to Constitutional Remedies are inter-connected because the judicial review is practiced when any fundamental Right is violated by the State. In this case, a higher court can repeal the judgments of a lower court based on its own investigation.

3. In the following illustration, fill in each tier with the judgments given by the various courts in the Sudha Goel case. Check your responses with others in class. 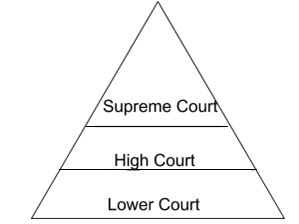 4. Keeping the Sudha Goel case in mind, tick the sentences that are true and correct the ones that are false.

(a) The accused took the case to the High Court because they were unhappy with the decision of the Trial Court.

(b) They went to the High Court after the Supreme Court had given its decision.

(c) If they do not like the Supreme Court verdict, the accused can go back again to the Trial Court.

(b) False. They went to the High Court after the Trial Court had given its decision.

5. Why do you think the introduction of Public Interest Litigation (PIL) in the 1980s is a significant step in ensuring access to justice for all?

The introduction of Public Interest Litigation (PIL) in the 1980s is a significant step in ensuring access to justice for all due to the following reasons:

6. Re-read excerpts from the judgment on the Olga Tellis vs Bombay Municipal Corporation case. Now write in your own words what the judges meant when they said that the Right to Livelihood was part of the Right to Life.

Download all the NCERT Solutions for Class 8 Civics Chapter 5 from the following link: