Realme X is soon going to be launched in India. At this price, you can’t anything better than this smartphone. It sports an outstanding 48 MP + 5 MP Dual Primary Cameras with LED Flash & 16MP Front Camera.

Realme X, the Pop-Up Selfie Camera Phone with 48 megapixel sensor is going to be launched soon in India. The smartphone is priced around Rs. 18,000, confirms Madhav Sheth, CEO, Realme. This handset from Realme is the most powerful one from the brand with Snapdragon 710 SoC along-with AMOLED screen and in-display fingerprint sensor.

The aforementioned price of the phone is set for the 8GB + 128GB variant of Realme X. There will be also a special Garlic and Ginger Variant of Realme X, which will be launched soon in India.

According to the recent launch of Realme X in China, the phone may come with 6.5-inch AMOLED display. Realme X is also driven by 6th Gen optical fingerprint scanner and Snapdragon 710 SoC with HyperBoost 2.0. The phone will be available in two variants that may include 6GB RAM & 64GB in-built storage and 8GB RAM & 128GB in-built storage, which is expandable through microSD card. 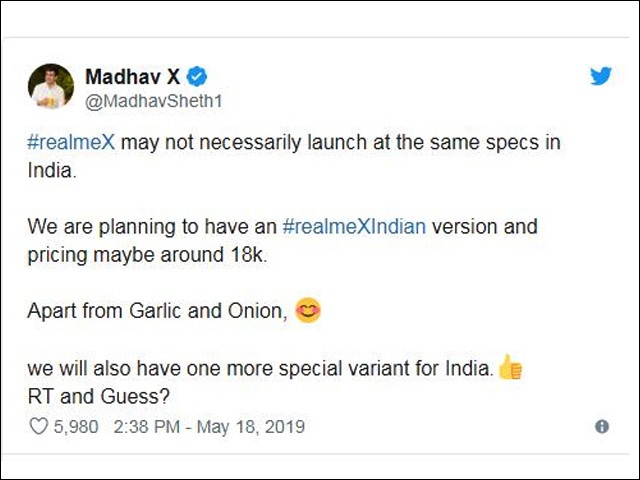 When it comes to the optical features, it features a whopping 48MP + 5MP rear sensors and 16MP with aperture lens on the front for clicking super selfies. Further, Realme X is equipped with Android 9.0 Pie based OS and has 3765 mAh battery with DOLBY Atmos speakers, which will ensure immersive music experience.

Let’s take a summarized look at the key specifications of Realme X Phone that is going to be launched in India soon:

Till the Realme X is launched in India, check out this article that covers detailed comparison on: