Data Interpretation is an important section asked in almost every competitive exam. It is one of the most scoring topics in banking examination. In SBI PO examination a large number of problems are asked on DI. It is noticed that problems asked SBI PO prelims examination 2015 are not very difficult but they are time consuming if individual is not aware of the short tricks.

Data Interpretation (DI) is an important section asked in almost every competitive exam.  It is one of the most scoring topics in banking examination. In SBI PO examination a large number of problems are asked on DI. It is noticed that problems asked SBI PO prelims examination 2015 are not very difficult but they are time consuming if individual is not aware of the short tricks. Candidates can attain expertise in this type of questions through adequate practice.

What is Data Interpretation?

Data Interpretation is the act of transforming data with an objective of draw out useful information and facilitating conclusion on the basis of given data.

To collect information from all the amount of data it needs to be presented in a lucid and concise manner. Therefore we use data representation to draw out useful information quickly as it immediately provides the overall scenario.

Here the banking team of Jagran josh has come up with some questions of DI based on the latest pattern that is expected in SBI PO prelims 2016.

It is the most fundamental way of representing data. In order to avoid some heads again and again, we make tables, consisting of horizontal lines called rows and vertical lines called columns with distinctive heads, known as captions. Units of measurements are given along with the captions.

The table given below shows the population, literates and illiterates (in thousands) and the percentage of literacy in 3 states, in a year:

After reading the table, mark a tick (√) against the correct answer in each question given below and hence complete the table.

1.) Percentage of literacy in Madras is

2.) Percentage of literacy in Bombay is

3.) Number of literates in Bengal(in thousands) is:

In a bar diagram, information is presented by means of rectangles, whose lengths indicate the quantity of the variable which the bar is representing. The following points are important:

1.) All bars are in the form of rectangles and the width of the bars is uniform throughout the diagram.

2.) The height of each bar is proportional to the frequency of the variable.

3.) The gap between various bars is uniform.

5.) The bars can be either horizontal or vertical depending on the space available.

The expenditure of a company under different heads (in thousands of rupees) is given below:

Draw a bar chart to depict the above data. 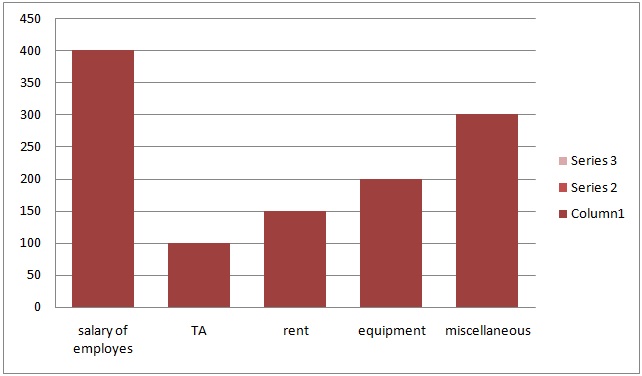 Study the graph and answer questions 1-5. 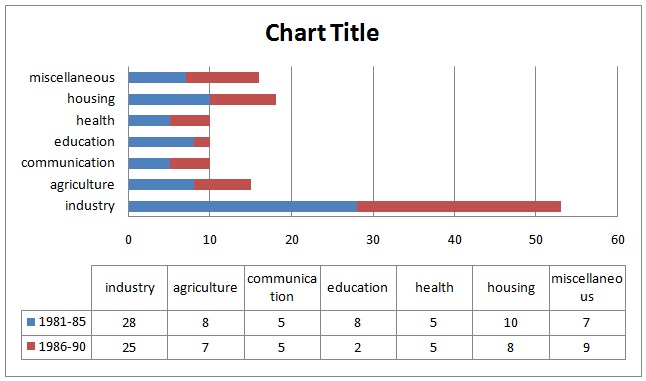 1.) Which of the items listed below accounts for the maximum expenditure during the year 1981 to 1985?

2.) Which of the items listed below accounts for the maximum expenditure during 1986 to 1990?

3.) The amount of expenditure on Agriculture is approximately what proportion of that on industry during the year 1986-90?

1.) (d)  out of the items listed in the question, clearly maximum expenditure during 1981-85 is on housing.

2.) (a) out of the items listed in  the question, clearly the maximum expenditure during 1986-90 is on agriculture.

Let the total expenditure be Rs.x.

In a pie chart, the values of different components of a frequency distribution are represented by the sectors of a circle. These sectors are so constructed that the area of each sector is proportional to the corresponding value of the component.

Since the sum of all the central angles is 360 degrees, we have

Example: The following pie diagram shows the expenditure incurred on the preparation of a book by a publisher, under various heads.

Study the diagram carefully and answer the questions 1-5:

1.) What is the angle of pie diagram showing the expenditure incurred on paying the royalty?

3.) Which two expenditures together will form an angle of 108 degrees at the centre of the pie diagram:

4.) If the difference between two expenditures be represented by 18 degrees in the pie-diagram, these expenditures are :

Thus, A and D together will form an angle of 108 degrees.

To complete the line graphs, the mid-points at each end are joined to the immediately lower or higher mid-points (as the case may be) at zero frequency.

1.) The total expenditure of which of the following pairs of years was equal to the income in 1992?

4.) In which of the following years was the percentage of expenditure to income, the highest?

Required no. of years =3

Clearly the percentage is highest in 1990.