In an event, A journey to the past to inspire future, the google CEO Sundar Pichai interacted his alma mater IIT Kharagpur and discussed his life experience. Read this article to know what he said. 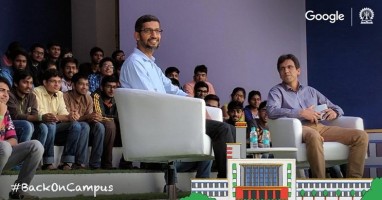 Sundar Pichai, the CEO of tech giant Google Inc, interacted his alma mater IIT-Kharagpur. At the event, which was named as “A journey to the past to inspire future” he discussed his life experiences with students and teachers. He shared many exciting and life changing experiences at the stage. Students waited eagerly for him to take the stage.  The Tagore Open theatre that hosted this event was packed with IITians. The event started at 12 pm.

He also shared funny moments from his college days. He told that when he first came to IIT Kharagpur he didn’t know Hindi, so he misunderstood ‘Abbey Saaley’ with common greeting as everyone around him would greet each other in the same manner. He was even so confident about the meaning of ‘Abbey Saaley’ that one day he went to mess and called out server-Abbey Saaley. The mess guys were so angry that they shut down the mess for a while. He told amid roars of laughter.

He shared how he met his wife Anjali at IIT campus who was his class mate then. He admired technology and recalled how difficult it was to call girls from their hostels when there were no smartphones. "If you had to get someone from the girl's hostel, you had to request someone in the front office to call them from inside. So they would call them loudly, 'Anjali, Sundar is here to see you'. It wasn't exactly a pleasant experience."

In the rapid fire round, he was asked how he spent his free time and he replied that he likes to spend time with his children who are 13 and 9 years old and he love watching cricket and football as well.