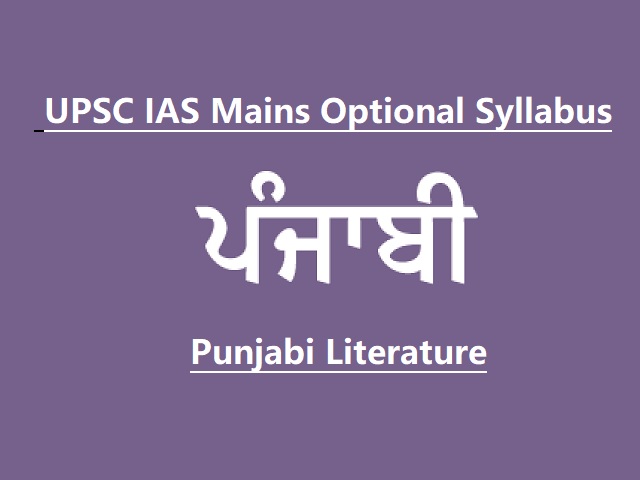 UPSC: UPSC offers Punjabi as an optional subject in the UPSC Civil Services Mains Exam. Punjabi is an Indo-Aryan language used as lingua franca in the state of Punjab. It is also widely used in Himachal Pradesh, Delhi, and Haryana along with parts of Uttarakhand, Uttar Pradesh, and Jammu. It is one of the official languages of India and is written in both Gurumukhi and Persian derived Shahmukhi script. Punjabi literature syllabus consists of topics like the history of the language and literature, its major literary traditions, major dialects, and the development of the Gurumukhi script. It also includes a critical analysis of major works by famous authors in Punjabi.

Answers must be written in Punjabi in Gurumukhi Script.

This paper will require first-hand reading of the texts prescribed and will be designed to test the candidate's critical ability.

It is to be noted that all the answers for the Punjabi literature Paper-II optional paper should be attempted in the Gurumukhi script only. The optional subject score plays an important role in the Mains marksheet as the marks scored in this paper help the aspirants to enhance their overall Mains score.