UPSC: Check the detailed analysis of questions based on the Environment and Geography Section asked in the UPSC Civil Services Prelims Exam 2020. The answers have been explained for a better understanding of aspirants.

UPSC: Environment and Ecology is one of the pet topics of UPSC Prelims and it maintained its position. This year it notched around 17 questions mostly based on facts and knowledge with respect to pollutants, National Parks, Bio Fuels, etc. Aspirants with good clarity and memorizing skills could make guesses through the elimination method. From the Geography section, questions based on map work and physical geography were asked in the UPSC Prelims 2020. Read ahead a detailed explanation of questions asked from these sections.

Ques: With reference to India's Desert National Park, which of the following statements are correct?

Explanation: desert National Park is one of the largest protected lands in India and is located in the districts of Jaisalmer and Barmer in Rajasthan. Statement 1 is correct.

The park’s vegetation is protected by the local communities like the Bishnois. Statement 2 is incorrect.

The Desert National Park (Rajasthan) in Rajasthan is one of the most prominent habitats for the Great Indian Bustard. Statement 3 is correct.

Ques: 1. 36% of India's districts are classified as "overexploited" or "critical" by the Central Ground Water Authority (CGWA).

Explanation: More than 50% of India's districts are classified as "overexploited" or "critical" by the Central Ground Water Authority (CGWA). Statement 1 is incorrect.

The Central Ground Water Authority is under Section 3 of the Environment Protection Act, 1986. Statement 2 is correct.

Ques: Among the following Tiger Reserves, which one has the largest area under "Critical Tiger Habitat"?

Ques:  If a particular plant species is placed under Schedule VI of The Wildlife Protection Act, 1972, what is the implication?

(a) A license is required to cultivate that plant.

(b) Such a plant cannot be cultivated under any circumstances.

(c) It is a Genetically Modified crop plant.

(d) Such a plant is invasive and harmful to the ecosystem

Explanation: The specified endemic plants in Schedule VI f The Wildlife Protection Act are prohibited from cultivation and planting.

Ques: Which one of the following statements best describes the term 'Social Cost of Carbon'?

(a) It is a measure, in the monetary value of the long-term damage done by a tonne of CO2 emissions in a given year.

(b) the requirement of fossil fuels for a country to provide goods and services to its citizens, based on the burning of those fuels.

(c) efforts put in by a climate refugee to adapt to live in a new place.

(d) contribution of an individual person to the carbon footprint on the planet Earth.

Explanation: The Social Cost of Carbon is the basis of the present value of the future damages that one additional unit of carbon emission can induce in the environment.

Ques: With reference to Indian elephants, consider the following statements :

Explanation: Calves generally live with the mother till they are five years old after which the males leave the herd but the females remain. Statement 1 is correct and Statement 3 is incorrect.

Karnataka has the highest number of elephants in India. Statement 4 is correct.

Ques: Which of the following Protected Areas are located in Cauvery basin ?

Explanation: Ceylon Frogmouth is a nocturnal Small Bird from Sri Lanka, Coppersmith Barbet is an Asian barbet, Gray-Chinned Minivet is a bird from the Campephagidae family and White throated redstart belongs to Muscicapidae.

Ques: Which one of the following protected areas is well-known for the conservation of a sub-species of the Indian swamp deer (Barasingha) that thrives well on hard ground and is exclusively graminivorous ?

Explanation: Swamp Deer is found in Kanha national park, 2 locations in Assam and 6 locations in Uttar Pradesh. They are no longer found in West Bengal as they are regionally extinct.

Ques:  Which of the following are the most likely places to find the musk deer in its natural habitat?

Explanation: A solitary shy animal, the musk deer lives in mountainous regions from Siberia to the Himalayas. Askot Musk Deer Sanctuary is located 54 km from Pithoragarh near Askot in Uttarakhand state. Gangotri National Park is also a habitat of Musk Deers.

Ques: Which of the following are the reasons/factors for exposure to benzene pollution ?

Explanation: benzene is highly volatile and exposure to the element occurs mostly through inhalation.

Ques: With reference to Ocean Mean Temperature (OMT), which of the following statements is/are correct?

Explanation: 26-degree isotherm is witnessed at a depth between 50 and 100 meters.

“Using OMT data collected during January-March 2018, we were able to predict with 80% probability that this year’s monsoon will be below average during June–September.” - senior scientist at IITM. Hence, Statement 2 is correct.

Ques:  Siachen Glacier is situated to the

(a) East of Aksai Chin 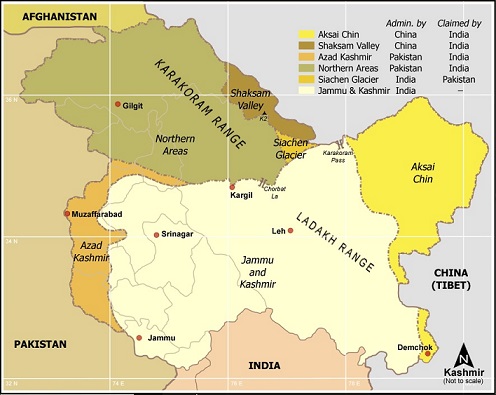 Explanation: Jet streams occur in both the Northern and Southern Hemispheres. The actual appearance of jet streams result from the complex interaction between many variables - such as the location of high and low pressure systems, warm and cold air, and seasonal changes. Statement 1 is incorrect.

The warmest part of Erin's eye was almost 21 degrees (Fahrenheit) warmer than the surrounding air, a dramatic difference from the air around it. Above 7.5 miles high, the eye's temperature dropped quickly to the same temperature as the air outside the eye. Statement 3 is incorrect.

Which of the pairs given above is/are correctly matched ?

Explanation: Mekong empties into the South China Sea at the Mekong Delta in Vietnam. Statement 1 is incorrect.

Thames rives lows into the North Sea via the Thames Estuary. Statement 2 is incorrect.