Aspirants of the UPSC IAS Prelims 2021 exam can check below 10 important questions related to the Supreme Court and High Court topics of Indian Polity. 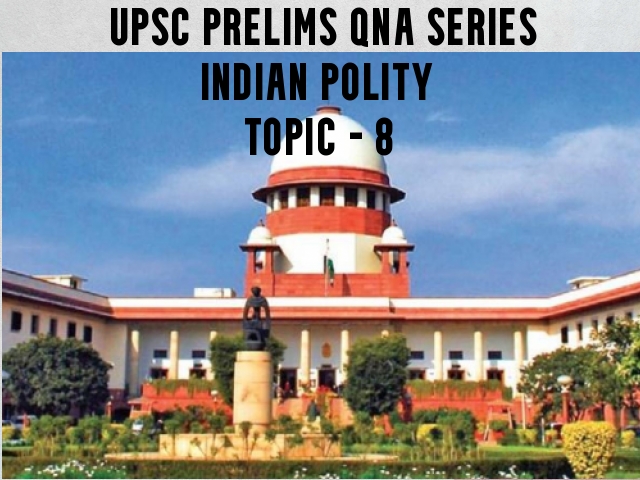 The Supreme Court of India is the highest judicial court and the final court of appeal under the Constitution of India, the highest constitutional court, with the power of judicial review. Whereas the highest judicial court in a state is the High Court. It is termed as the second-highest in the country after the Supreme Court of India. Currently, India has 25 High Courts established in different states of the country. Aspirants preparing for the coveted civil services exams must thoroughly study and revise these topics to score well in Prelims as well as in Mains GS 2 paper. To help the aspirants in their preparation and revision, we have provided 10 questions based on the latest UPSC Prelims pattern. These questions have been framed by the subject expert on the most important topics of Indian Polity.

Ques 1: Who among the following has the right to establish the bench of the Supreme Court elsewhere in the country?

(a) The Chief Justice of the Supreme Court

(b) The President of India

Ques 2: Which of the following Article talks about the establishment of the Supreme Court?

Ques 3: In which of the following categories of cases, the Supreme Court of India has the power to decide?

Select the correct answer using the codes given below:

Ques 4: Who can extend the jurisdiction of a High Court?

(a) Parliament of India

(b) President of India

(d) The governor of the state

Ques 5: Which of the following state does not have a High Court?

Ques 6: Which statement regarding the tenure of judges of the Supreme Court is not correct?

(a) Judge of the Supreme Court can remain in office till the age of 65 years.

(c) On the recommendation of Parliament, he can be removed by the President.

(d) Supreme Court judge can be removed only in the condition of misconduct.

Also Read: What is the procedure to remove the judge of the Supreme Court?

Ques 7: How can the High Court Judge be removed?

(a)  A resolution passed by the general majority of the Parliament

(b) By the Supreme Court on the advice of the President

(d)  A resolution passed by the  Parliament With a special majority

Ques 8: The transfer of Judges from one High Court to another High Court may be made by the:

a) President of India in consultation with the Chief Justice of that High Court.

b) Chief Justice of the concerned High Court

c) Governor of the concerned State in consultation with the Chief Justice of India.

d) President of India after consultation with the Chief Justice of India.

Ques 9: From which source India got the concept of Single order of court?

(d) None of the following

Ques 10: Arrange the following High Courts in ascending year of their year of establishment.