Check 10 most important questions from the topic Invasion and Settlement of Europeans in India. Aspirants of UPSC Civil Services Prelims 2021 exams can solve these questions to test their knowledge on this topic. 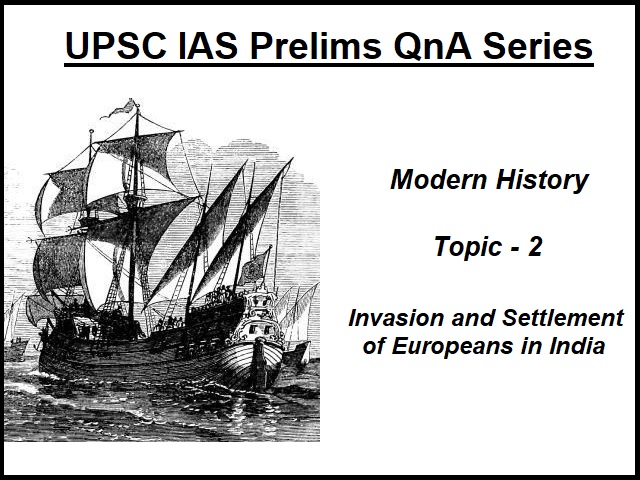 UPSC Prelims 2021: Portuguese were the first Europeans to come to India when in 1498, Vasco da Gama discovered a direct sea route to India. He set up a trading factory at Cannanore. The Dutch (People of Netherlands), came to India and founded their first factory in Masaulipatam in Andhra in 1605. They were followed by the English and French. Europeans came to India for trade, but in due course of time, they gained political and administrative dominance over the country.

Ruled by the Europeans for more than 300 years, the Invasion and Settlement of Europeans in India itself become one of the most important topics of Modern Indian History. To help the UPSC aspirants in their preparation and revision, we have provided 10 questions based on the latest UPSC Prelims pattern. These questions have been framed by the subject expert on the topic.

Ques 1:  Who among the following was the first European to come to India?

Which of the given statements is not correct?

Ques 3: Who among the following British explorer and adventurer and one of the first to make an overland journey to India?

Ques 4: Which of the following European wars flared up the first Carnatic Wars in India?

a) War of Spanish succession

b) War of Austrian succession

Ques 6: The land of Bombay was given to the English Prince Charles as Dowry by the

Ques 7: The first Anglo-Burmese War concluded by a treaty popularly known as….

a) Treaty of Burma

b) Treaty of Tamu

Ques 8:  The state which granted the Golden Farman to the Dutch to trade freely on payment of a duty was:

Ques 9: Who was the founder of Madras city?

Ques 10: Who captured Ormuz of Hormuz in the Persian Gulf from the Portuguese in 1622?