Find WBJEE 2015 Solved Physics Question Paper – Part 5 in this article. This paper consists of 5 questions (#21 to #25) from WBJEE 2015 Physics paper. Detailed solution of these questions has been provided so that students can match their solutions.

Resolving the velocity in horizontal and vertical components

22. When light is refracted from a surface, which of its following physical parameters does not change ?

When light is refracted from a surface, its frequency does not change.

23. A solid maintained at t10 C is kept in an evacuated chamber at temperature t20 C (t2 >> t1). The rate of heat absorbed by the body is proportional to

Since the temperature are given in Celsius, so none of the options are correct.

24. Block B lying on a table weighs W. The coefficient of static friction between the block and the table is μ. Assume that the cord between B and the knot is horizontal. The maximum weight of the block A for which the system will be stationary is

The vertical component of tension will balance the weight of block A.

Let the weight of block A be WA.

The frictional force between block and the table will balance horizontal component of T.

25. The inputs to the digital circuit are shown below. The output Y is 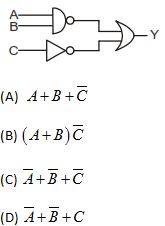 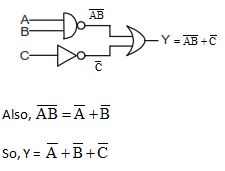