Why is it colder at the top of a mountain than it is at the sea level?

In this article you will come to know that why is it colder at the top of a mountain than it is at the sea level?

Q. Why is it colder at the top of a mountain than it is at the sea level? 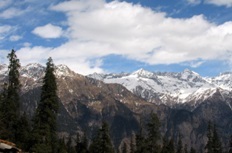 Ans. Change in atmospheric pressure accounts for the lowering of temperature at higher altitudes. There is a direct relationship between temperature and pressure, i.e., the temperature of a system increases with the increase in its pressure and vice-versa. We know that the air in the atmosphere exerts pressure on us. Near the earth’s surface the density of air is more due to the gravitational pull of the earth and as we move up to the higher altitudes, the density of air keeps on decreasing due to the decreased gravitational pull. Thus, there is less atmospheric pressure at the higher altitudes, resulting in lowering of temperature. Hence, it is colder at the mountain top than it is at the sea level.