The need for opening up space for questioning, interrogation and dialogue in Indian literature was stressed at the 1st SOA Literary Festival which kicked off at the SOA Deemed to be University here on Saturday.

The need for opening up space for questioning, interrogation and dialogue in Indian literature was stressed at the 1st SOA Literary Festival which kicked off at the SOA Deemed to be University here on Saturday.

“Events around us show that the space is getting squeezed. What is the crisis of our times? What is the crisis any author of substance will face?” Dr. Sitanshu Yashaschandra, eminent Gujarati poet, said while speaking at the inauguration of the two-day festival here.

“What is ‘attractive’ is masquerading as ‘authentic’,” he said adding what looked ‘splendid’ and ‘spectacular’ was often not ‘sensible’ and ‘significant’. “How best can Indian literature and language, together address this crisis,” he asked.

The inaugural function was also addressed by Dr. Vasdev Mohi, eminent Sindhi poet who has been nominated for the prestigious Saraswati Samman this year, and Dr. Dnyaneshwar Mulay, eminent writer and diplomat. 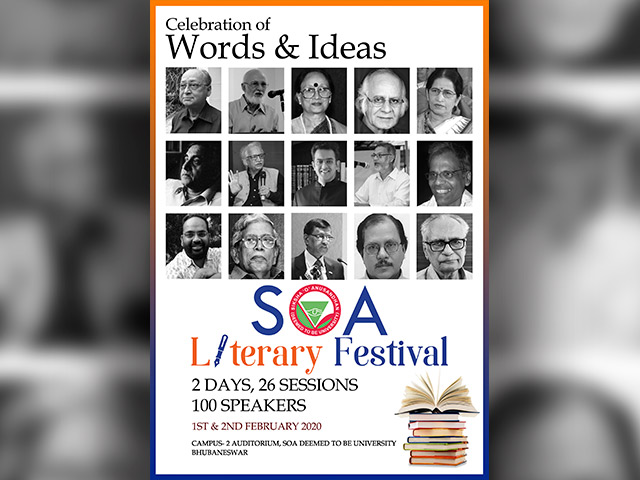 The literary fiesta, spanning 27 sessions over two days, has been organised by the SOA Centre for Preservation, Propagation and Restoration of Ancient Culture and Heritage of India (PPRACHIN), an initiative of the university. The event has attracted around 100 eminent writers, poets, commentators, translators and critics from different parts of the country. Prof. R.K.Chauhan, Vice-Chancellor of SOA, presided over the programme while Dr. Gayatribala Panda, Head, PPRACHIN, welcomed the guests.

He said the waters of Indian languages, the ‘Chilika of each region’, had been dirtied by negaltive, political, religious and selfish economic forces. The scenario was similar across South Asia but literature should become a force and clean like Chilika, he added.

Speaking to reporters on the sidelines of the event later, Dr. Vasdev Mohi expressed concern over the young generation’s lack of interest in literature.

“The young generation is not taking interest in literature and that has been causing the reduction in its space. The young should come forward and enrich literature in their own language,” he said.

Dr. Mohi said though literature was often referred to as the mirror of the society, it was not so in reality. The mirror reflected the truth while literature was a mixture of reality and imagination, he said adding it was for the writer to strike a balance between the two.

Odia literature, he said, was rich and the state had a lot of love for literature.

Dr. Mulay, also an eminent diplomat, said literature should take advantage of the advancement in technology to take language to every corner. “Now we have the software for every Indian language which has to be put to use,” he said while regretting that the television had now replaced the book shelves in most houses.

“We need a culture of books, we need to create a library in every home,” he said.

Two eminent writers, Mr. Tarun Kanti Mishra, and Mr. Kali Charan Hembram, who have been nominated for the Kendriya Sahitya Akademi awards this year, were felicitated on the occasion by the Vice-Chancellor, Prof. Chauhan.

Mr. Mishra, who was Odisha’s former chief secretary, has been chosen for the Sahitya Akademi Award for his book ‘Bhaswati’ while Mr. Hembram, who writes in Santali language, was chosen for his work ‘Sisirjali’.

SOA has also been ranked 15th among the top 50 Deemed to be Universities in the country in the latest Outlook-ICARE India University rankings for 2019, making it the highest ranked such university in Odisha. As per the Outlook-ICARE survey methodology, the evaluation of institutions was based on parameters such as Faculty Student Ratio (FSR), Faculty with Ph.D (FWP), Papers Per Faculty (PPF), Citations Per Paper (CPP) and Inclusiveness and Diversity (ID).

Siksha ‘O’ Anusandhan Deemed to be University here retained the 24th position it had obtained in 2018 to occupy the top spot in the university category in Odisha as the rankings for institutions of higher education for 2019 were announced by the Ministry of Human Resource Development in New Delhi on Monday. In the rankings conducted through the National Institutional Ranking Framework (NIRF) and released by the President, Mr. Ramnath Kovind, SOA was placed 24th in the university category--- the place it held in 2018--- and 41st among overall institutions of higher education in the country. With this, SOA, which was conferred with the status of a Deemed to be University by the UGC in 2007 (repeat Nov 2015), has remained the top institution in the university category in Odisha for the fourth consecutive year. Against the score of 49.59 it had registered in 2018, SOA continued to shine by securing 50.31 this year.

The Institute of Medical Sciences and SUM Hospital, faculty of medical sciences of SOA, was ranked 21st in the country to be the top ranked medical college in the state.

SOA’s faculty of engineering and technology, Institute of Technical Education and Research (ITER), which entered the ranking process for the first time this year was ranked 32nd in the country behind National Institute of Technology, Rourkela (16th) and IIT, Bhubaneswar (17th).

SOA is proud to be associated with 9 degree granting institutes, which has a whopping strength of 10,000 students. The institute leaves no stone unturned in providing quality education in the field of medicine, engineering & technology, dental sciences, management sciences, pharmaceutical sciences, law, nursing, hospitality, tourism management and agriculture. SOA keeps on updating its curriculum from time to time as per the latest industry trends and believes in providing education to students with a holistic approach.

The department of Institute of Technical Education and Research (ITER), faculty of engineering and technology of SOA, has now become the 4th institute in the country to get 3 of its programs accredited by the reputed Accreditation Board for Engineering and Technology (ABET), USA.

Adding yet another feather to its glowing cap, SOA has been ranked third in the country in the Swachh Campus Ranking for 2018 conducted by the HRD ministry. This shows the commitment and dedication of Siksha ‘O’ Anusandhan’s vision to work towards the skill development of students and betterment of the society.

The University believes that the teaching-learning process is a holistic exercise which can transform the society. Its mission is to educate students to become responsible, enlightened and productive citizens and promote entrepreneurship that can improve human condition, serve business, education, government, health care and the community at large.

Disclaimer: The information provided in this Notification is solely by SOA University. Jagranjosh.com bears no representations or warranties of any kind, express or implied, about the completeness, accuracy, reliability, suitability or availability with respect to the information. Individuals are therefore suggested to check the authenticity of the information.