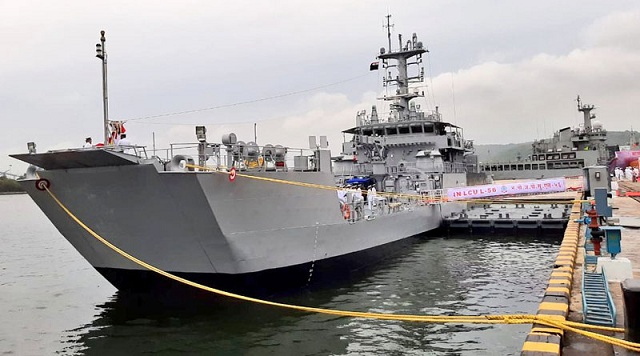 IN LCU L-56 is the sixth of the eight indigenously built LCU MK IV class ships. It is an amphibious ship, the primary role of which will be transportation and deployment of armoured vehicles, main battle tanks, troops and equipment from ship to shore and vice-versa. The LCU L56 would be administered and based in Port Blair under the NAVCC in Andaman and Nicobar Command (ANC).

The indigenously designed LCU L-56 portrays Indian Navy’s growing capability in becoming self-reliant. It was built by Garden Reach Shipbuilders and Engineers Ltd (GRSE), Kolkata. With LCU L-56, GRSE has become the first shipyard in India to have built the 100th warship. The naval ship’s making is in line with the ruling government’s ‘Make in India’ programme.