India-ASEAN Summit 2019: PM Modi stated that India's Act East Policy is an important part of its Indo-Pacific vision and ASEAN is the core of the Act East Policy. 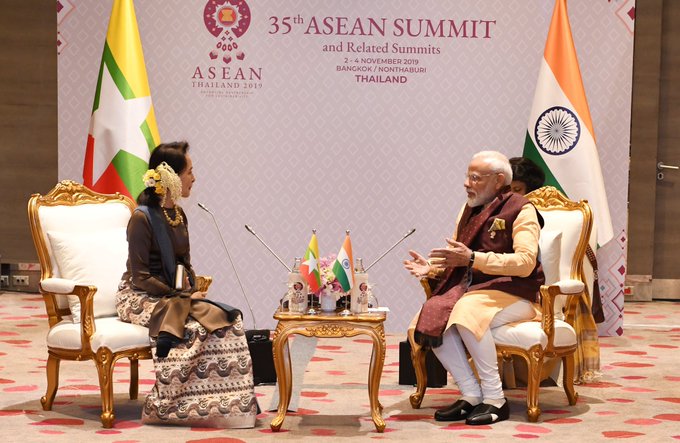 India-ASEAN Summit 2019: The 16th ASEAN-India Summit was held in Bangkok, Thailand on November 3, 2019. The summit was attended by Indian Prime Minister Narendra Modi.

While speaking at the ASEAN-India Summit, PM Narendra Modi welcomed the mutual coordination of the Indo-Pacific Outlook between India and ASEAN. PM Modi stated that India's Act East Policy is an important part of its Indo-Pacific vision and ASEAN is the core of the Act East Policy. He stated that an integrated, organized and economically developing ASEAN will immensely benefit India.

PM Modi reiterated that India is committed to strengthen its partnership with ASEAN through better surface, maritime, air and digital connectivity. India’s $ 1 billion worth line of credit is expected to be used to boost physical and digital connectivity. The PM said that the main intention is to increase people-to-people contact for research, study, trade and tourism.

Towards the same, PM Modi affirmed that India is committed to strengthening its cooperation with ASEAN in areas of mutual interests. He expressed his readiness to further increase capacity building and partnerships in areas such as agriculture, research, science, engineering and Information and communications technology (ICT).

PM Modi further welcomed the recent decision to review India ASEAN FTA saying it will not only improve the economic partnership between the two, but also balance out their trade relations. He expressed that India wishes to strengthen its partnership with ASEAN in areas including maritime security, blue economy and humanitarian aid.

Indian Prime Minister and ASEAN leaders vowed to combat terrorism in the Indo- Pacific region after PM Narendra Modi raised the issue saying it is a threat to the peace and security of the whole region. The leaders of the ASEAN nations expressed their wish to explore opportunities for strategic cooperation.

PM Narendra Modi met the Prime Minister of Japan, Shinzo Abe on the sidelines of the India-ASEAN and East Asia Summit 2019 at Bangkok on November 4, 2019. This is the fourth meeting of the two leaders. They had met last at Vladivostok in September 2019. 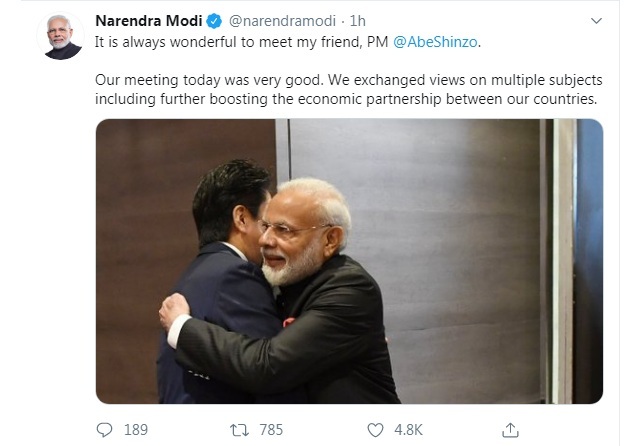 The two leaders discussed the progress achieved in the Mumbai-Ahmedabad high-speed rail project and reiterated their commitment towards enabling smooth implementation of the project. They further reaffirmed their commitment towards creating a free, open and inclusive Indo-Pacific region based on a rules-based order. They agreed to further strengthen the bilateral cooperation to achieve peace in the Indo-Pacific region.

The leaders of the ASEAN nations also expressed the same views and agreed for strategic cooperation.

India and Indonesia are the world’s two largest democratic and plural societies. In line with the same, PM Narendra Modi said that India is committed to strengthening its ties with Indonesia in areas such as defence, security, connectivity, trade and investment and people-to-people exchanges. Indian PM Narendra Modi met the President of Indonesia, Joko Widodo on November 3, on the sidelines of the India-ASEAN summit. 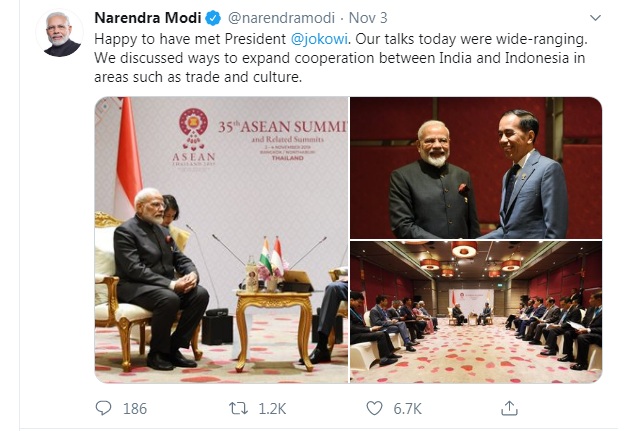 PM Modi and Indonesia’s Joko Widodo reiterated their commitment to enhance maritime cooperation to achieve peace, security and prosperity in the Indo-Pacific region. They also discussed the issue of extremism and terrorism and agreed to work closely at bilateral and global levels to tackle the menace. India and Indonesia are close maritime neighbours.

PM Modi further invited the Indonesian companies to use the opportunities presented in India for investment. India and Indonesia are commemorating the 70th anniversary of the establishment of their diplomatic relations in 2019.

PM Narendra Modi met Prime Minister of Thailand, Retired General Prayut Chan-o-Cha on the sidelines of the ASEAN summit on November 3. The two leaders reviewed the progress made in the bilateral relationship between the two countries.

The leaders, while noting the enhanced engagement in defence and security, agreed to further explore possibilities of cooperation in the sector. The leaders further acknowledged a 20 percent increase in the bilateral trade in 2018 and decided to further enhance trade and investment. 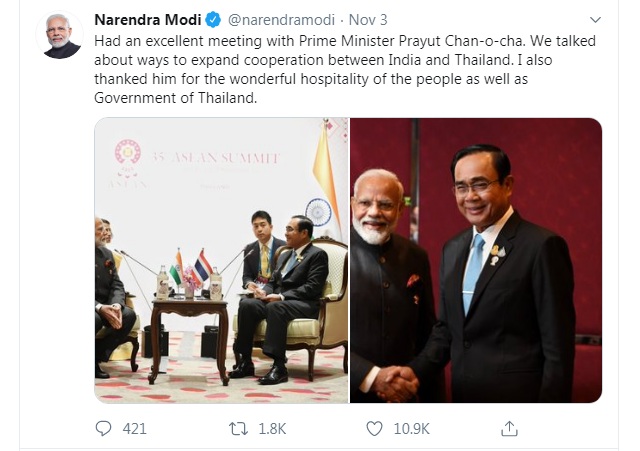 The leaders also discussed ways to boost connectivity between the two countries and welcome the growth in air connectivity with the start of a direct flight between Guwahati and Bangkok. More agreements have been finalized for cooperation between Thailand’s Ranong Port and Indian ports in Chennai, Kolkatta and Vishakapatnam. India and Thailand share a close maritime relationship.

PM Narendra also met Myanmar’s State Counsellor Aung San Suu Kyi on the margins of the ASEAN-India Summit on November 3. The two leaders expressed satisfaction on the progress of the vital partnership between the two countries.

PM Modi emphasized the priority India attaches to Myanmar as a partner in India's Look East Policy and the Neighbourhood First policies. He also reaffirmed India’s commitment to improve physical connectivity to and through Myanmar to Southeast Asia.

The proposed initiatives including building port, road and other infrastructure. India also committed to support the expansion of capacity for Myanmar's police, military and civil servants, as well as its students and citizens. 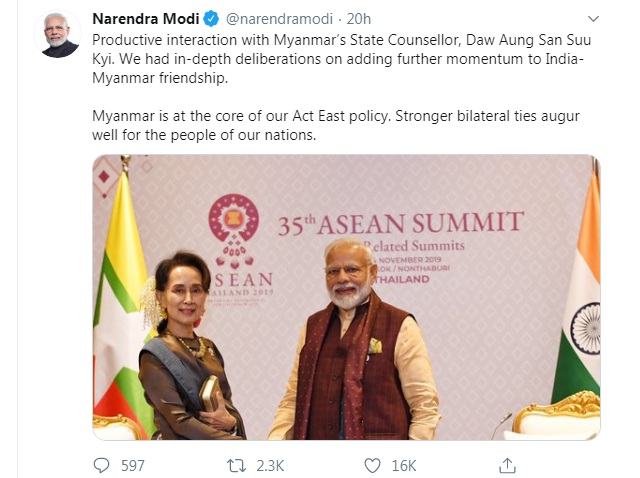 The two leaders also agreed to enhance people to people connectivity, agreeing that it would help expand the base of the partnership. Towards the same, they welcomed the expansion of air connectivity between the two countries and the growing interest of India's businesses in Myanmar.

The leaders also spoke about rising extremism and agreed to boost cooperation in ensuring that insurgent groups do not find space to operate across the India-Myanmar border. PM Modi also highlighted that the speedy, safe and secure return of the displaced Rohingyas to their homes in Rakhine state was not only important in the interest of the displaced community but also the interest of India, Myanmar and Bangladesh.

ASEAN aims to promote intergovernmental cooperation and facilitate educational, political, security, economic, military and socio-cultural integration among its members and other Asian countries.

Besides its member nations, ASEAN engages with other countries from the Asia-Pacific region and beyond.

ASEAN was created on August 8, 1947 after the foreign ministers of 5 nations- Thailand, Singapore, Malaysia, Philippines and Indonesia signed the ASEAN declaration.

• To accelerate social progress, economic growth and cultural development in the region

• To assist one another in training and research facilities