Narendra Modi is set to take oath for his second term as Prime Minister on May 30. The oath-taking ceremony will be attended by the leaders of the BIMSTEC Member Countries; Sooronbay Jeenbekov, the President of Kyrgyzstan; and Mauritius Prime Minister Pravind Jugnauth. 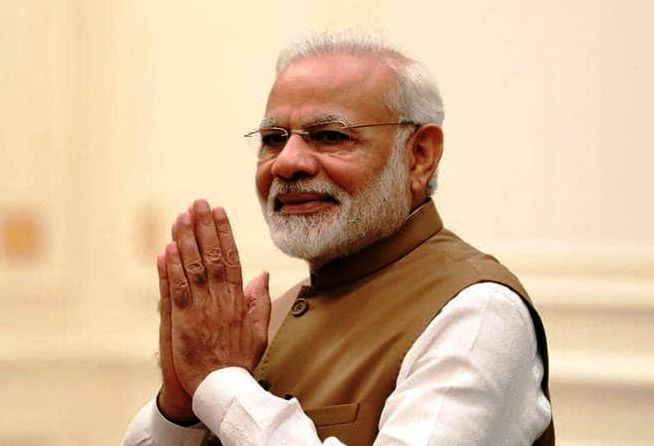 After receiving the formal invitation from India, BIMSTEC countries leaders as well as Kyrgyz President Sooronbay Jeenbekov and Mauritian Prime Minister Pravind Kumar Jugnauth have confirmed their attendance at the oath-taking ceremony of Prime Minister Narendra Modi on May 30.

India's invite to BIMSTEC & other leaders

India invited the leaders of the BIMSTEC Member Countries to attend the swearing-in ceremony of Prime Minister Narendra Modi on May 30, 2019.

The External Affairs Ministry had also sent the invitations to Sooronbay Jeenbekov, the President of Kyrgyzstan who is the current Chair of the Shanghai Cooperation Organization (SCO) and to Mauritius Prime Minister Pravind Jugnauth, the Chief Guest 2019 Pravasi Bhartiya Divas.

Narendra Modi is set to take oath for his second term as Prime Minister on May 30. President Ram Nath Kovind will administer the Oath of Office and Secrecy to Modi and his Council of Ministers at a function in Rashtrapati Bhavan, New Delhi. 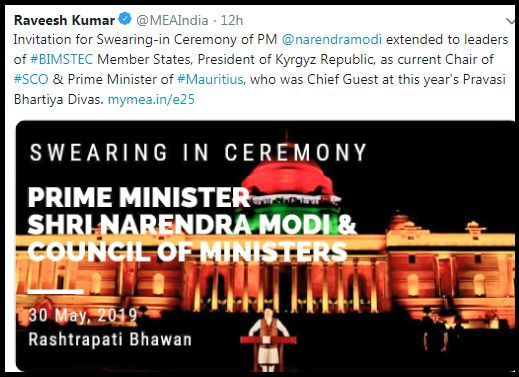 These invitations were in line with the Government's focus on the 'Neighbourhood First' policy. The move holds diplomatic significance as it majorly outreaches India’s neighbourhood, engrossing Indian diaspora across the world.

The invitation to SCO Chair Sooronbay Jeenbekov signifies India’s outreach to the Shanghai Cooperation Organisation (SCO), which has China, Pakistan, Russia, Uzbekistan, Kazakhstan, and Tajikistan as its members.

India’s transit from SAARC to BIMSTEC

India knocked-off its engagement with the SAARC and augmented its contributions in BIMSTEC simultaneously after the Uri Attack of 2016 that claimed 18 soldiers of the Indian Army. Pakistan based militant group Jaish-e-Mohammed was behind the attack.

Following the attack, India decided to boycott the SAARC summit to be held in Islamabad in November 2016 and opted to renew its engagement with BIMSTEC by hosting an Outreach Summit with BIMSTEC leaders alongside the 2016 BRICS summit in Goa.

So far, there has been no indication from the Ministry or the Government on Pakistan Prime Minister Imran Khan being invited for the ceremony.

India’s relation with Pakistan grew sour after the Pulwama terror attack of February 2019 that killed an Indian army convoy of over 40 CRPF personnel. India relentlessly responded to the attack by aerial strikes on terror camps in Balakot in Pakistan.

• The Bay of Bengal Initiative for Multi-Sectoral Technical and Economic Cooperation (BIMSTEC) was founded in 1997.

• It is an international regional organisation of seven nations of South Asia and South East Asia.

• The BIMSTEC member countries are Bangladesh, India, Myanmar, Sri Lanka, Thailand, Bhutan, and Nepal. All these seven countries lie near the Bay of Bengal.

• Sri Lanka is the current Chair of the BIMSTEC.