India has gained one point benefit by coming to 43rd position. India is also facing some challenges like maintaining high growth with employment generation, fiscal discipline and Digital literacy. 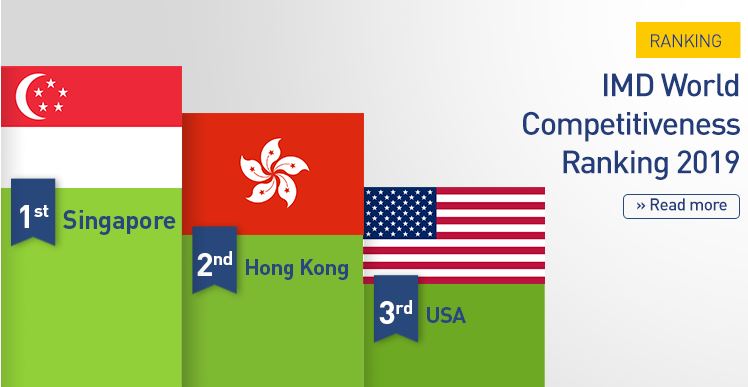 IMD World Competitiveness Rankings were established in 1989. It incorporates 235 indicators from each of the 63 ranked economies to evaluate their ability to foster an environment where enterprises can achieve sustainable growth, generate jobs and increase welfare for its citizens.

•    Singapore has ranked as the world’s most competitive economy for the first time since 2010.
•    Hong Kong SAR and USA are on second and third positions respectively.
•    Switzerland grabbed the fourth place, thanks to economic growth, the stability of the Swiss franc and high-quality infrastructure.
•    The United Arab Emirates (UAE) entered the top five for the first time earlier in 2016 it was ranked 15th.
•    Venezuela remained (63rd) at the bottom of the ranking due to inflation, poor access to credit and a weak economy in the country.

•    India has gained one point benefit by coming to 43rd position. Benefit in ranking was a result of Improvements in business legislation, increase in public expenditure on education.
•    India has scored well on several economic parameters and tax policies but has lagged in terms of public finance, societal framework, education infrastructure, health and environment.
•    However, India is also facing some challenges like maintaining high growth with employment generation, fiscal discipline and Digital literacy and internet bandwidth in rural areas.

It is basically a list which is compiled by the Switzerland-based International Institute for Management and Development (IMD)’s World Competitiveness Center (WCC). In order to facilitate long-term value creation, The IMD measures how well countries manage all their resources and competencies. It takes into account a wide range of statistics such as unemployment, GDP and government spending on health and education, as well as data from an executive opinion survey covering topics such as social cohesion, globalisation and corruption.