The United States and its ally Israel announced that they were pulling out of the UN's culture and education body, accusing the body of anti-Israel bias. The United States has walked out of the 195-member organisation once before under ex-president Ronald Reagan. 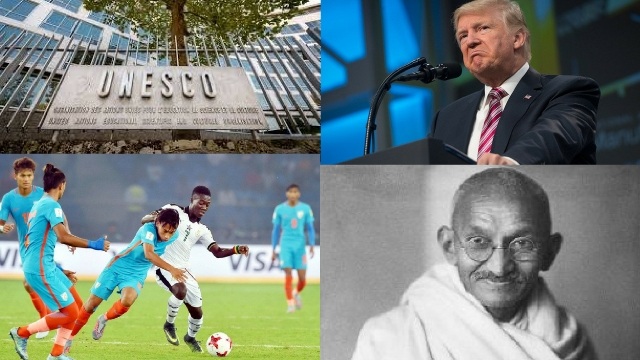 India has been ranked 100th among 119 developing countries on the Global Hunger Index (GHI) 2017, behind nations such as North Korea, Bangladesh and even conflict-stricken Iraq.

The index highlights major hunger issue in the country, indicating that it is getting worse. Last year, India was ranked 97th in the list. The GHI ranks countries based on four indicators_ undernourishment, child mortality, child wasting and child stunting.

In Asia, only Afghanistan and Pakistan are ranked worse than India at 107 and 106 respectively. China ranks the highest at 29, followed by Nepal at 72.

US, Israel withdraw from UNESCO accusing the cultural body of 'anti-Israel bias'

The United States and its ally Israel announced on 12 October 2017 that they were pulling out of the UN's culture and education body, accusing the body of anti-Israel bias.

“This decision was not taken lightly, and reflects U.S. concerns with mounting arrears at UNESCO, the need for fundamental reform in the organisation, and continuing anti-Israel bias,” said the US State Department spokeswoman Heather Nauert.

The United States has walked out of the 195-member organisation once before under ex-president Ronald Reagan. President George W. Bush announced America's return in 2002, but relations soured again in 2011 when Barack Obama pulled the plug on funding to the body after its members voted to admit Palestine as a full member.

India’s run at the FIFA Under-17 World Cup came to an end as they went down 0-4 against two-time champions Ghana in their final group A match at the Jawaharlal Nehru Stadium in New Delhi on 12 October 2017.

In the earlier matches, India lost to US and Colombia. However, looking back at young team India’s performance in the tournament, they did show much resilience and tact in their second group match against Colombia, giving the team a tough competition.

In the other Group A game, Colombia beat United States 3-1 in Mumbai. With this win Ghana have entered the knockout stage after topping Group A on goal difference while Colombia are second and the US are at the third position.

The Union government would be commemorating the 150th Birth Anniversary of Mahatma Gandhi, who is known as the father of the nation, from 2 October 2019 to 2 October 2020.

The event will be celebrated at both national and international levels to propagate the message of the Mahatma. A national committee headed by Prime Minister Narendra Modi has also been constituted for the same purpose.

The committee would comprise Chief Ministers of all the states, representatives from across the political spectrum, Gandhians, thinkers and eminent persons from all walks of life.