UK-based rapper and singer Hard Kaur recently took to her Instagram and blasted out against Rashtriya Swayamsevak Sangh (RSS) Chief Mohan Bhagwat, calling RSS responsible for all terrorist attacks in India including 26/11 and the Pulwama attack. Hard Kaur also posted a picture calling UP CM Yogi Adityanath a rapist. An FIR has been lodged against the singer for her comments on the complaint of a local lawyer.

The singer also uploaded posts stating that RSS was involved in the deaths of murdered journalist Gauri Lankesh and ATS Chief Hemant Karkare. The singer’s remarks did not go down well with a Twitterati, who immediately blasted her for being abusive towards the UP CM and RSS and losing it on social media.

Hard Kaur posted a picture of RSS Chief Mohan Bhagwat on her Instagram along with a caption that read that RSS is the face of all problems in India. She blamed RSS for 26/11 and Pulwama attack, also for the ruining the northeast. She also blamed the RSS for Shivaji’s death and Ashoka. 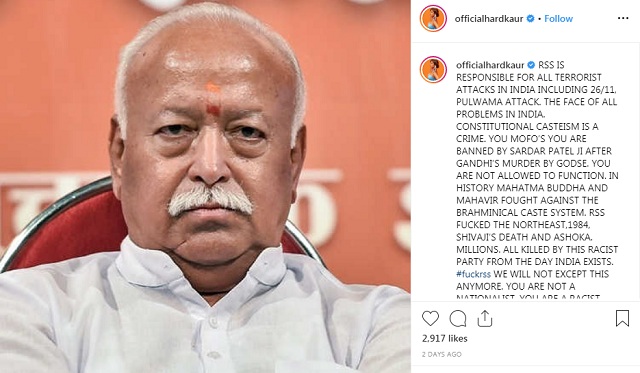 Hard Kaur blasted UP CM Yogi Adityanath by posting his picture along with a caption that read, “ If this guy was a superhero, his name would be rapeman Yogi. You call him when you want your sisters, mothers, daughter raped. National Hero. I personally call him orange rapeman.”

Hard Kaur also posted a photo of a book cover, which read “Who killed Karkare” and blamed RSS for his death. She also posted a photograph of slain journalist Gauri Lankesh with a caption that read, “I’ll never let your killers go.”

The UK based singer, whose real name is Taran Kaur Dhillon, has been booked for her remarks against the RSS and the UP Chief Minister. The police have lodged an FIR against Hard Kaur upon complaint by local lawyer Shashank Shekhar under section 124A (attempt to excite disaffection or hatred), 153A (promoting enmity between different groups on ground of religion), 500 (defamation), 505 (intent to incite) of IPC, 66 (sending offensive messages) IT Act.

Shashank Shekhar is an RSS volunteer and in his complaint to the police, he said that he was deeply hurt by Hard Kaur’s remarks against RSS Chief and UP CM on social media platforms.  The matter is currently under investigation.