The Sri Lankan government declared April 23 as a national day of mourning. 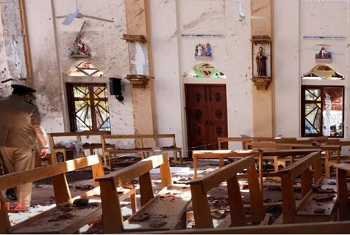 Sri Lankan Government enforced a nationwide state of emergency from the midnight on April 22, 2019 following the suicide bomb blasts at churches and luxury hotels on the occasion of Easter, which killed over 290 people and wounded more than 500.

The decision was made during a meeting of the National Security Council (NSC) chaired by President Maithripala Sirisena. The move is aimed at enhancing the counter-terrorism powers of the security forces. The government clarified that the measure would be confined to dealing with terrorism and would not impinge on the freedom of expression.

• The Sri Lankan government has declared April 23 as a national day of mourning, in the memory of all the victims of the horrific blast.

• The government information department also revealed that curfew would be reimposed between 8 pm on April 22 and 4 am on April 23.

• Though an indefinite curfew was ordered on April 21 after the attacks, it was lifted early on April 22.

• A two-day holiday has been decreed in the nation in a bid to reduce public traffic.

• While authorities have not made public details on those held after the terrorist attacks, as per sources, the police have arrested 24 men in connection with the bomb blasts.

• No terrorist organisation has till now claimed the responsibility for the attacks on two churches and four hotels in and around Colombo.

The Sri Lankan President Maithripala Sirisena has announced the appointment of a special committee led by retired Supreme Court judge to investigate the attacks and submit its report within two weeks.

Thirteen local suspects have been arrested for their involvement in the serial blasts across the country.

According to reports, the government had intelligence inputs about such attacks and it will look into why adequate precautions were not taken. 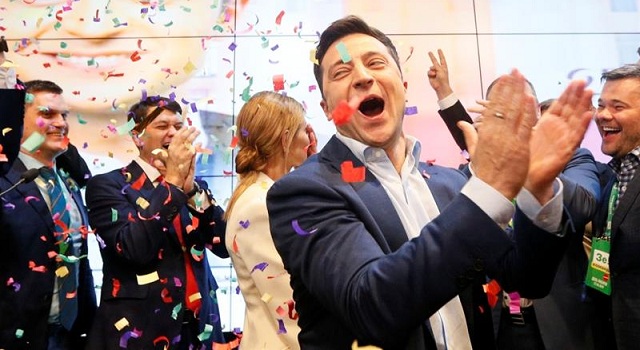 Ukrainian comedian Volodymyr Zelensky on April 21, 2019 won a landslide victory in the country's presidential election 2019. With nearly all ballots counted in the run-off vote, Zelensky had taken more than 73 percent of the votes with incumbent Petro Poroshenko trailing far behind on 24 percent.

Current Ukrainian President Poroshenko, who admitted defeat after the first exit polls were published, said that he will not be leaving politics. He told voters that 41-year-old Zelensky was too inexperienced to stand up to Russia effectively.

• Volodymyr Zelensky is best known for starring in the long-running satirical television drama series ‘Servant of the People’, in which his character accidentally becomes Ukrainian president.

• In the show, he played a teacher who is elected after his expletive-laden rant about corruption goes viral on social media.

• He ran in the actual presidential race under a political party with the same name as his show.

• Throughout the election campaign, he avoided serious interviews and discussions about policy - preferring instead to post light-hearted videos to social media.

• With no previous political experience, Zelensky's Presidential campaign mainly focused on his difference to the other candidates rather than on any concrete policy ideas.

• Despite this, he won the first round with more than 30 percent of the vote - almost double what Poroshenko got when he finished in second place with 15.95 percent votes.

• In his new role, the comedian-turned-president will be faced with a complex bunch of issues including a simmering war with Russian-backed rebels in east Ukraine.

• Zelensky said he wanted to "reboot" Western-brokered peace talks that have so far failed to end the conflict.

The outgoing leader, Poroshenko, was elected to power after an uprising in 2014 overthrew the country's previous pro-Russian government, triggering Russia’s annexation of Crimea.

What has since ensued is a series of tensions, which have been magnified with Russia’s support to the rebels who control the areas of Donetsk and Luhansk in Eastern Ukraine.

In November 2018 Russia fired upon and seized three Ukrainian Navy vessels and imprisoned its 24 sailors in Moscow off the coast of Crimea injuring crew members. The event prompted angry protests outside the Russian embassy in Ukraine. Consequently, martial law was imposed for a 30-day period in 10 Ukrainian border regions.

The Martial law was introduced because Ukrainian President Petro Poroshenko claimed there was a threat of "full-scale war" with Russia.

During this period, Ukraine banned all Russian men between 16 and 60 from entering the country for the period of the martial law with exceptions for humanitarian purposes. Ukraine claimed this was a security measure to prevent Russia from forming units of “private” armies on Ukrainian soil.

In December 2018, the National Security and Defense Council of Ukraine announced that it had extended the restrictive measures of the State Border Guard Service regarding the entry of Russian men into Ukraine.