SC reserves order on NCP-Congress-Shiv Sena petition for Tuesday at 10.30 am

SC to announce its order on NCP-Congress-Shiv Sena petition  tomorrow at 10.30 am.

The Supreme Court has reserved its order on the joint petition by NCP-Congress-Shiv Sena  for 10.30 am on Tuesday. Justice Khanna citing past judgement in similar cases stated that the floor test was done in 24 hours in most cases, in others it was done in 48 hours.

While the NCP-Congress-Shiv Sena have pushed the court to order for a floor test within 24 hours, the opposition's counsel argued against it stating that only the Governor has the discretion to decide when to hold the floor test.

Kapil Sibal, appearing on behalf of the Shiv Sena argued that the senior-most member of the assembly can be made the pro tem speaker and the floor test can be video recorded.  Abhishek Manu Singhvi representing the NCP and Congress stated, " I am happy to lose floor test today, but they don't want floor test." He further argued saying that when both the groups are open for a floor test, why should there be a delay. 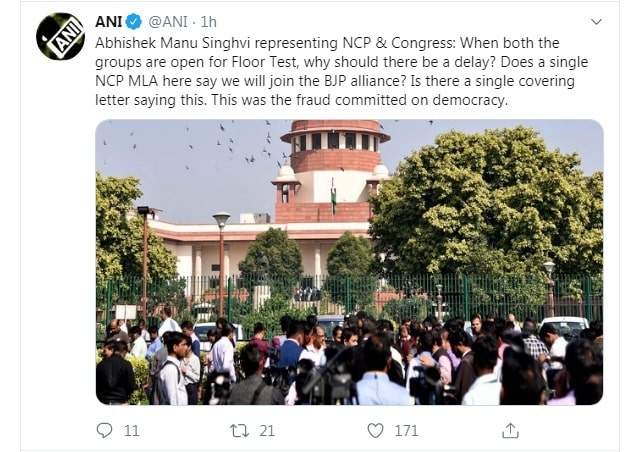 Singhvi also argued that Ajit Pawar has been removed as NCP legislative party chief. His argument came in response to the statement made by Maninder Singh, Ajit Pawar’s advocate, that Pawar extended support to Fadnavis as the Chief of NCP Legislative Party. Raising question on the letters of support submitted by Ajit Pawar to the Governor, Singhvi argued that there is no covering letter that states that all the NCP MLAs support BJP.

He argued that it is a list of signatures of the 54 MLA’s to support the election of Ajit Pawar as their legislative party chief. The advocate argued that nowhere does the letter say that the 54 MLAs support the BJP. He called it a fraud on democracy and a perjury.

However, Solicitor General Tushar Mehta  stated that 12 signatures were missing in the letter that was submitted to the Governor to withdraw Ajit Pawar's name as the leader of NCP. Mukul Rohatgi  also argued saying that he has seen the list of MLA's supporting Ajit Pawar. Maninder Singh appearing on behalf of Ajit Pawar  stated that his list is correct factually, legally and Constitutionally. He argued that he was authorized to extend support.

Solicitor General Tushar Mehta informed the top court that he has all the original documents with him.  Before handing over the documents, SG Mehta touched upon the background of the case and stated that the Maharashtra Governor had invited all the three parties to form government but it was only after their failure that the President's rule was imposed in the state. 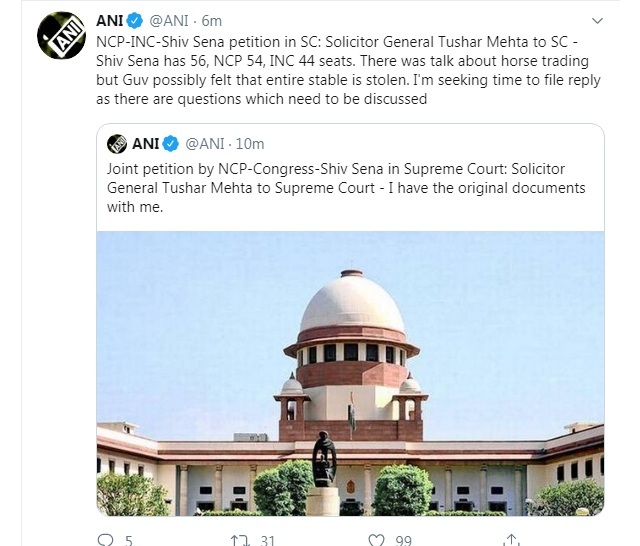 While handing over the letters of support and the Maharashtra Governor's letter to the apex, SG Mehta stated that the letters submitted by Ajit Pawar, the legislative party leader of NCP,  claimed the support of all 54 MLAs of NCP. The Solicitor General submitted that the Maharashtra Governor does not need to do an inquiry on the documents. His decision to invite Devendra Fadnavis to take oath was solely based on the documents submitted, which showed majority support. The Governor's letter mentions that the Fadnavis-Pawar government has the support of
70 MLAs.
The letter submitted by Fadnavis  stated that he didn't have the required numbers when he was invited to form the government for the first time but he later was able to have majority with Aji Pawar's support. SG Mehta argued that the Maharashtra Governor had no reason to disbelieve him.
Senior Advocate Mukul Rohatgi, appearing on behalf of Devendra Fadnavis, argued that President's rule was imposed in the state after BJP's pre-poll ally Shiv Sena left them. Then Fadnavis received the support of NCP so he went to the Governor to stake claim and the president's rule was revoked and he was sworn in.
Also read: SC directs centre, Maharashtra government to submit letters of support

The three parties - Shiv Sena, NCP and the Congress have argued that the Maharashtra Governor by his duty was required to study the claim put forward by Devendra Fadnavis before inviting the BJP to form government. The parties have also claimed that BJP's claim of having support of the entire NCP is wrong and misleading.  The Sharad Pawar-led NCP has claimed to have at least 52 of its MLAs back on its side.
While Kapil Sibal is representing Shiv Sena and Abhishek Manu Singhvi is representing Congress and NCP, Mukul Rohatgi is representing Maharashtra BJP, Maninder Singh is representing Ajit Pawar and Solicitor General Tushar Mehta is representing the centre and the state government in the court.
Background
The Supreme Court had on November 24 asked the centre, Maharashtra government, Maharashtra CM Devendra Fadnavis and deputy CM Ajit Pawar to submit all relevant documents relating to government formation in Maharashtra.
The documents required to be submitted before the court includes all the letters of support from the MLAs and the letter issued by the Maharashtra Governor Bhagat Singh Koshyari inviting BJP to form government in the state.
The apex court gave the direction during the hearing of the petition filed by Shiv Sena-NCP-Congress combined. Senior Congress leader and advocate, Kapil Sibal is representing the parties in the court. The parties have requested the court to order for an immediate floor test.
The Supreme Court bench comprised Justices Sanjiv Khanna, Ashok Bhushan and NV Ramana. The bench stated that it will issue appropriate orders after going through all the documents. Solicitor General Tushar Mehta is representing the state and central government in the matter.
In a surprising twist on November 23, BJP’s Devendra Fadnavis took oath as Maharashtra CM at 8 am, while NCP’s Ajit Pawar was sworn in as the deputy CM of the state. The development came as the Shiv Sena-NCP-Congress talks on government formation were almost at the final stage.
The Maharashtra assembly elections 2019 concluded with the BJP winning 105 seats, Shiv Sena winning 56 seats, NCP winning 54 seats and the Congress winning 44 seats in the 288-member assembly.