The sovereign internet bill aims to expand government control over the Internet. 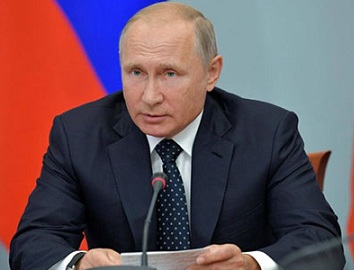 President Vladimir Putin on May 1, 2019 signed a new measure into law that will allow Russian authorities to isolate the country's internet from the rest of the world and create a new national network.

The ‘sovereign internet’ bill aims to expand government control over the Internet. Russian lawmakers insist the new law is necessary to ensure the security of Russia's online networks, while critics argue that the vaguely worded bill gives new censorship powers to government monitors.

• The text of the new law was published on May 1 but it will not come into effect until November 2019.

• The key measures of the bill include creating technology to monitor internet routing and steering Russian internet traffic away from foreign servers allegedly to prevent a foreign country from shutting it down.

• As per the authors of the initiative, Russia must ensure the security of its networks after US President Donald Trump unveiled a new American cybersecurity strategy in 2018 that said that Russia had carried out cyber attacks with impunity.

• However, the bill has been decried by rights groups. Thousands of people recently rallied in Russia against this bill and other bills, which according to critics aim to restrict information and communication online.

What do the critics say?

According to critics, the bill would create a system that gives the authorities the capacity to block access to parts of the Internet in Russia. The blocking would be extrajudicial and non-transparent.

Further, under the new law, the Russian Internet access providers will need to ensure that their networks have the technical means for "centralised traffic control" to counter potential threats.

This control will pass notably to the Russian FSB security service and the telecoms and media monitoring agency Roskomnadzor, which is often accused of arbitrarily blocking content on the web.

While Russia's internet has faced restrictions in the past, it has tilted hard in the direction of greater domestic censorship in recent years.

Activists fear that an independent Russian internet would involve the creation of a national firewall to monitor and censor content passing in and out of the country.

The Sri Lankan Government has issued orders preventing any person from preaching religious, extremist or radical ideologies that glorify terrorism.

The order also banned any foreigner from preaching any such ideology and few persons involved in it have been deported.

While making the announcement, Sri Lankan Prime Minister Ranil Wickremesinghe said that the whole world should unite as one to face terrorism. He further stated that his government hoped to cooperate with all countries that oppose terrorism to share intelligence and expertise.

Sri Lankan police on May 1, 2019 released the names and pictures of the nine suicide bombers involved in the Easter day attacks that killed at least 253 people including 42 foreigners.

As per the police, the attack was led by Zahran Cassim who caused suicide blast at Shangrila hotel in Colombo.

The Sri Lankan Government had appointed a special committee to probe the April 21 attacks. The committee has submitted its interim report to President Maithripala Sirisena who said that he will take immediate necessary action on it after discussing it with the Attorney General.